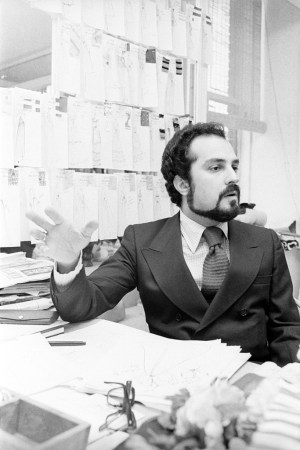 This story first appeared in the October 9, 2013 issue of WWD. Subscribe Today.

Capraro, known for his dresses and evening gowns, was a native New Yorker who studied at what was then Parson’s School of Design. After graduating, he worked for milliner Lilly Dache for two years before moving on to work as associate designer for Oscar de la Renta’s boutique collection in 1966. In 1974, he branched out to form his own company, Albert Capraro, on Seventh Avenue.

When Capraro initially entered the fashion scene, only store buyers and a few fashion editors were aware of his imminent rising success.

Ford saw an article and photographs of Capraro’s designs in a Washington newspaper, in which he talked about his use of only American fabrics. She was so impressed by the 31-year-old designer’s prices that she had him summoned to the White House and subsequently ordered 12 styles. She also asked him to create five state gowns using fabrics selected by then-President Ford during a visit to the Far East.

Capraro once noted, “I like to think of myself as a gentleman-designer whose first concern is the femininity of the woman I design for. This I express through the simplicity of the look and the lavishness of style I have created.’’

Capraro built his business via a made-to-order clientele in the social, political and entertainment worlds. He retired around 2005 but remained active as a consultant in the fashion industry.

Capraro is survived by a sister, Louise Ann Capraro Ferraris, and his longtime partner, Eddie Star.

Services will be held today at 10 a.m. at Johnstons’ Funeral Home in Lindenhurst, N.Y.