Overcoats Rule on the Runways at Milan Shows

Buyers gave the thumbs-up to Jil Sander along with Prada, Brioni and Gucci. 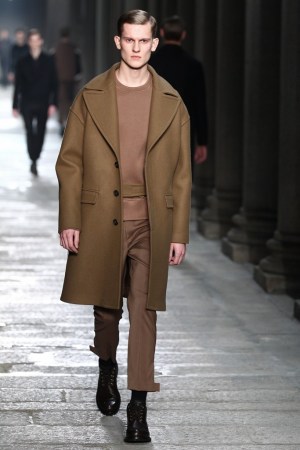 MILAN — It will forever be known as the season of the coat. Milan’s designers turned out enough to dress legions of chilly men in a season that was also strong on traditional tailoring, heritage fabrics, technical materials and the fusion of formal and sporty looks.

“Double-breasted by far is one of the most important silhouettes. In general, coats are strong, and it looks like there’s a focus on lighter-weight fabrics, which is really where we need to be given the climate issues that we deal with,” he said.

Business is thriving, with men opting for fashion items, and stores upping their budgets to satisfy demand.

“Our budgets are up, we had an excellent designer season and we’re very optimistic in 2013,” added Kalenderian. “It’s a moment of growth for the designer business, in both apparel as well as shoes and accessories; all three categories will experience growth in 2013.

Budgets are up at Harvey Nichols, too: “Our men’s wear business is so strong compared with women’s,” said Paula Reed, the store’s new fashion director.

“We’re seeing the rise of the peacock male. There’s been so much coverage of men’s street style — from sites like The Sartorialist and Tommy Ton — it’s upped the game and allowed men to release their inner fashionista,” added Reed.

Polat Uyal, chief merchandising officer, at Istanbul-based Beymen, said Milan is still “unbeatable for men’s,” especially at this heady time for the sector. Last year men’s fashions kept pace with women’s at the chain, growing 25 percent. “I feel confident for fall 2013 for men’s and am targeting another 25 percent increase this year,” Uyal said.

Among the shows that made the biggest impression on buyers this season were Jil Sander, Prada, Burberry, Dsquared2, Umit Benan, Brioni, Bottega Veneta and Gucci. “Jil Sander was number one.…Her design is ageless, and she has recast her classic styles in a contemporary way, adjusting them to the times,” said Tiziana Cardini, fashion director at La Rinascente.

Here’s more of what buyers had to say:

Jeffrey Kalinsky, executive vice president of designer merchandising, Nordstrom:
Sound off: There is a ton of commercial potential in the Milan collections. The collections look quite wearable, with a big focus on sartorial dressing, easy separates and important coats and jackets.
Trendspotting: Key trends are colorblocking and color pops, statement outerwear, double-breasted suits, shades of gray and the use of luxe materials like leather, calf hair and fur. There is a ton of leather on the runways, and colored leathers look especially good at Prada and Burberry. The color pops at Gucci were memorable, especially the surprise of red, lime green and pale blue.

Stephen Ayres, head of fashion buying, Liberty:
Sound off: Overall, it seemed like quite a serious season, lots of black and monochrome. It was refreshing to see Jil Sander and Prada use a really rich color palette just to offset the amount of black there was down the runway.

Matthew Singer, men’s fashion director, Neiman Marcus Group:
Trendspotting: An obvious and strong trend for the season is the statement coat. We saw success with this category for fall 2012 and are excited to see its return. I thought Moncler Gamme Bleu did a fantastic job of this in sportswear, while Gucci gave the fabrics a sexier approach in their tailored clothing.

Anita Barr, director of men’s wear, Selfridges:
Sound off: The mood in Milan was somber, but there was stunning product.
Trendspotting: Simplicity — at Jil Sander and Bottega Veneta especially. Both shows had very clean cuts and a gorgeous color palette. Also, there were a lot of pinstripes.

Toby Bateman, buying director, Mr Porter:
Trendspotting: With regard to fabrics, there were lots of checks, predominantly windowpane, in addition to pinstripes and chalk stripes. We also saw a lot of cut-and-sew details and paneling work and monochrome colorblocking. Knitwear was chunky with lots of cable and fishermen knits.

Magali Ginsburg, head of buying, Thecorner.com:
Trendspotting: A variety of fabrics and materials, including boiled wool, ponyskin, leather, angora and Neoprene were predominant again this season. Geometric paneling was also a trend. The focus was on volume as shown by boxy tops and oversize jackets.

Pat Di Bratto, general merchandise manager, senior vice president, buying and merchandising, Holt Renfrew:
Sound off: There is a renewed energy to men’s wear this fall-winter 2013, with a further blurring of the divide between work and play. We see opportunity in particular with footwear, accessories and outerwear.
Trendspotting: The great coat is the standout item of the season, with serious sartorial clothing remaining an important option for men. Other key trends include novelty casual trousers, colored leather and fur trimming in collars and linings. In accessories, key items include scarves, gloves, fedoras and brogue high-tops.

Eric Jennings, men’s fashion director, Saks Fifth Avenue:
Trendspotting: I’ve never seen so much outerwear on the runway, whether it be a cropped bomber, belted military topcoat or trench. Colors were vivid and strong, with a lot of springlike colors — light blues, yellows and purple. Some of the weights also looked springlike, then when you got up close to them in the showroom you saw they had more structure and substance.

Tancrède de Lalun, merchandise manager for men’s and women’s wear, Printemps:
Sound off: It’s back to basics, with no big surprises in terms of brands, colors, new trends. It’s a nice season in terms of the quality fabrics and richness of outerwear, but not an outstanding one.

Cindy Ho, fashion director, 360 Style, Kuwait:
Trendspotting: My favorite was Prada. Very rich in colors and fabrics. The mix and match makes men look really beautiful and confident. Besides suits, it is a new era of luxury fashion for men. I feel the men’s wear is more playful now in the sense of use of colors and fabrics. Knitwear, accessories, including bags and shoes, are very key elements of dressing up. I hope the trend will continue and let all the men enjoy.