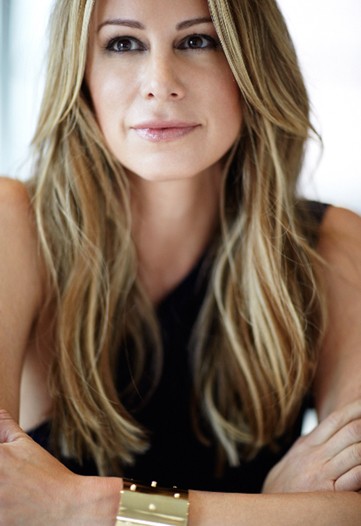 For Jennifer Fisher, style isn’t confined to a single category.

As a result, the Santa Barbara, Calif.-born, New York-based designer, who came to the world of jewelry in an unlikely way, has anything but trepidations about going into new product categories.

After beating a rare tumor and having a child against the odds soon after, Fisher wanted to commemorate the birth of her first son, Shane, with a piece of jewelry. But the former fashion stylist, who has worked on TV and commercial projects with Hollywood moguls such as the late Aaron Spelling, didn’t find anything to suit her Mad Max-meets-minimalist avant garde style — so she started to make them.

“I wanted something to emulate my personality and style,” said Fisher, who also worked at magazines such as Detour and L.A. Style after studying business at the University of Southern California.

She stamped dog tag-like plates of gold with names, words and phrases and launched Jennifer Fisher Jewelry in 2005. The line, sold privately through her SoHo atelier in New York, where she designs the jewelry, and on her Web site, has a cult following, including Sarah Jessica Parker, Uma Thurman and Nicole Kidman. Fisher’s fine jewelry has evolved of late from the name plate necklaces (which remain some of her top sellers) to more daring looks, such as black diamond covered Gothic letter pendants, gold and diamond studded rocker spike bracelets and coiling snake pendants inlaid with gemstones. She now has 4,000 charm styles in her repertoire. Though retailers have approached her, she prefers operating the business on a vertical level so she can keep prices in check. Fine jewelry prices start at $85 at retail and go up to $12,000, and all pieces are made to order.

In the spring, Fisher will debut a capsule collection of sterling silver jewelry named Fawn, to offer consumers a more accessible price point. Fawn has retail price points from $30 to $700. Rihanna has already been seen sporting a style from the line.

And because she just couldn’t find the right vest or wrap to coordinate with her Rick Owens-rife wardrobe, next year Fisher is dipping her toe into outerwear and related accessories with the launch of Wyler Designs by Jennifer Fisher.

Wyler incorporates pelts such as mink, fox and Mongolian lamb into architectural, drapy vests, collars with hanging oxidized metal chains and edgy cropped jackets to be worn over an evening gown, but Fisher contends the line can be dressed up with black-tie attire or down with jeans. The furs are treated in innovative ways, such as using oxidation and metallic stretch leather in tones such as gunmetal and copper. Wyler had a soft launch in Kirna Zabête in New York this fall, and the line will be rolled out further next year.

“My inspiration comes from my life. With my constant bicoastal travel because of family and work…I had always been looking for the right jacket or vest layering piece that went from day to night on either coast which could travel easily and exuded chic effortless style,” said Fisher. “Wyler does just that. It translates to any part of the world in almost any climate, day or night with jeans or a fantastic dress.”

Fisher is not stopping at jewelry and outerwear. She has plans to expand further into areas including home design, apparel and accessories. She consults for a contemporary fashion house on its outerwear line but declined to divulge its name.