Before launching her line, Millstein previously worked as a buyer and senior merchant at Givenchy, Harrods and then Chanel. 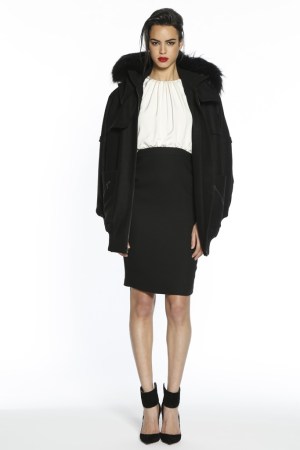 Sylvie Millstein was born in Paris, raised in Versailles,  France, worked in Japan and now lives in New York. That multiculti insight is evident in Hellessy, the collection she launched for spring and is expanding for fall. Millstein previously worked as a buyer and senior merchant at Givenchy, Harrods and then Chanel, where she eventually became the house’s general merchandising manager for Japan. After moving to Manhattan in 2007, she saw a void in the market for luxe yet practical clothes that suited her lifestyle. “I know luxury from a customer standpoint and women will pay for quality and longevity,” she said. Millstein built Hellessy — named after herself and her two young sons, Hendrix and Lennox — on that idea.

After showing the spring capsule lineup to a few buyers out of her SoHo apartment, it was quickly snagged by Harrods, Kirna Zabête and Susan of Burlingame. For fall, Millstein worked her minimal, feminine collection of thoughtfully constructed pieces in a medley of materials: wool and angora blends, Italian stretch wool crepe, silk and wool twill, silk Modal jersey, heavy silk satin, lambskin leather and raccoon fur. Millstein believes that “clothing shouldn’t distract from the woman wearing it,” so her shapes are simple while still strong and sculptural. Silhouettes include cap-sleeve dresses figure-enhanced by darts and ruching, as well as pencil skirts, peplum tops, suiting and a fur-trimmed hooded parka, all done in a rich palette of slate blue, deep burgundy, oyster blue, blush and charcoal gray.

Positioning herself at the designer level, Millstein notes that her entire collection is produced in the U.S. (mostly in New York). Retail prices range from $270 for tops to $1,550 for dresses, with leather pants at $1,550 and a padded parka at $2,800.