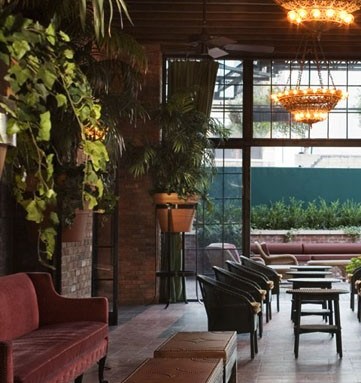 With New York Fashion Week just a month away, several designers are leaning toward off-site locations, but have yet to commit.

Adding to their indecision is the fact that Bumble & bumble’s Meatpacking District location is not an option this season. And IMG Fashion has decided to hold off on introducing a fourth venue near Bryant Park for fashion presentations — this season’s preferred and more affordable format — until September instead of unveiling one next month.

The ailing economy is unquestionably a factor for designers, especially young ones who in some cases are doing everything they can to make a splash without going under. Bryant Park’s going rates for the Tent, the Promenade and the Salon are said to be $48,000, $38,000 and $28,000, respectively, and that just covers the space. Add on casting, production, styling, hair, makeup and celebrity guests and that figure can easily leap into six figures.

Last month Vera Wang caused a bit of a stir by revealing that her show will be held in her new Mercer Street store instead of Bryant Park. Betsey Johnson, DKNY, Carmen Marc Valvo and Reem Acra are among the others who have decamped since last season. Conversely, Tommy Hilfiger will be back in the tents for the first time in several seasons, as will J.Mendel, Charlotte Ronson and Adam Lippes.

At this stage in the game, 59 designers have committed to the tents and eight are on board for off-site venues, said Fern Mallis, senior vice president of IMG Fashion, singling out Justin Timberlake’s William Rast label as a welcome newcomer to the tents. “My take is pretty optimistic, without wanting to sound like a Bernie Madoff where everything is perfect. We do have a very strong schedule. Every time someone decides not to do something, that opens up an opportunity for someone else,” she said.

While off site doesn’t always mean affordable, Valvo is saving a bundle by having a three-hour fashion installation at Citrine on Feb. 18 instead of the tents. For starters, the FlatIron District lounge is giving the designer the space for free, which automatically equates to a $50,000 savings. Not having to cast 20-plus models is another $50,000 savings, according to Frank Pulice, director of communications.

Others are defraying costs by different means — sight unseen. Three of publicist Kelly Cutrone’s clients — Nicholas K, Sergio Davila and Mara Hoffman — agreed to collaborate for a group show Feb. 15 in the tents, even though they will be introduced for the first time tonight over drinks. “When I think of the word ‘designer,’ ‘harmony’ and ‘collectivity’ are not the first two words that come to mind,” Cutrone said. “But this could be a new frontier. This economy could take us from the me generation to the we generation.”

In the meantime, designers are focused on the tasks at hand, with the February shows being at the top of that list. Calvin Klein Collection plans to make the most of the ground-floor event space in the company’s West 39th Street offices, putting it to good use for its women’s and men’s runway shows. The latter is a first for the company, which previously staged the men’s show in the ground-floor event space of its Milan office.

Marc Jacobs is lining up the Lexington Avenue Armory for his Feb. 16 show, according to its superintendent, Eligio Santiago. He declined to comment on the expense, but said the designer typically rents the space for eight or nine days. While the contract is still being ironed out, it “shouldn’t be a problem,” Santiago said.

Last year the venue was a source of much consternation for the company, which was slapped with a $1 million fine for allegedly bribing the former superintendent.

Other designers returning to last season’s locales include Thakoon and Philosophy di Alberta Ferretti, which are both showing at Eyebeam Gallery. Marchesa is also Chelsea-bound and will stage its show at the Chelsea Art Museum Feb. 18.

Lutz & Patmos will use its new showroom at 425 West 13th St. for an intimate presentation. Doo-Ri Chung has lined up the gallery at Milk Studios and Jonathan Saunders will be showing at the new Skyline space at 465 10th Avenue.

Alexander Wang plans to stage a Feb. 14 show at Roseland Ballroom, which can house up to 1,500 guests and can be had for as little as $18,000, according to Meredith Rothstein, director of special events for the Midtown space. But the designer will skip hosting an after-party this season. After hosting a blowout bash with Foxy Brown last season, the designer thought that one would be too tough to top, a company spokeswoman said. “We made that decision last season. Coming off that, we really wanted to focus on the clothes. It was more about that than the economy,” she said.

While Wang is set on a more intimate affair for his show, previous Roseland users, such as Y-3 and Gwen Stefani, have splurged on their productions. “I look at what they do for an eight- to 12-minute show and think, ‘Oh, my God,’” Rothstein said.

But this time around, designers are not being so freewheeling, according to Allan Kurtz, managing director of Gotham Hall, where the going rate is between $15,000 and $25,000. “People are really watching what they are doing,” he said, adding that a group of five designers has inquired about hosting a combined show there on Feb. 13.

They aren’t the only ones weighing their options. Swaim and Christina Hutson, who folded their two-year-old Obedient Sons & Daughters label earlier this month due to lagging capital from their investor, have yet to decide what off-site venue they will use for their new label. The name of their company will be revealed through show invitations.