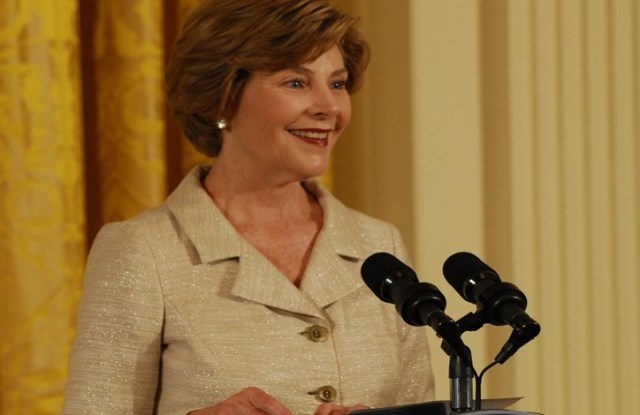 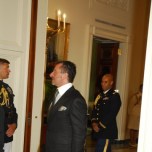 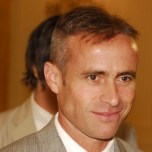 WASHINGTON — In her final salute to American design as First Lady, Laura Bush welcomed winners of this year’s Cooper-Hewitt National Design Awards to the White House on Monday.

“American design helps to tell our nation’s story and shape our common identity,” said the First Lady, who has championed design and hosted the event throughout her husband’s two terms. “William Lamb’s Empire State Building, Raymond Loewy’s Coldspot refrigerator, Bill Blass’ casually chic attire — these creations form the American backdrop and also many of our most cherished memories.”

Dressed in a metallic taupe Carolina Herrera pantsuit, Bush noted that “some of our country’s first designers were actually our founding fathers.”

In July 1776, the Department of Congress asked Benjamin Franklin, John Adams and Thomas Jefferson to create a new national seal, but after their first attempt was “rejected outright,” they had to regroup. “Fortunately for President Bush, American statesmen are no longer expected to be great designers,” she said. “When he was asked about his rug in the Oval Office, the president likes to say that he did the smart thing for any leader to do — he delegated the design to me, and then I did the smart thing and delegated the task to a special designer.”

Asked about her legacy, the First Lady told WWD that she hasn’t given it that much thought. She is hopeful, however, that design will continue to become an increasingly intrinsic dimension of the American vernacular. And she also expressed the desire for the next first lady to host the awards.

“I hope there will be more attention [to design.] I know there will be in both architecture, and landscape architecture, and green design,” she said. “The whole design community can be a huge help to our entire country in solving environmental problems. Part of the technology that will be able to solve environmental problems for the U.S. will come out of the design community. I think that must be really exciting for designers.”

The 2008 Lifetime Achievement award winner Charles Harrison, who designed 750 products for Sears, Roebuck & Co. including the 3-D View-Master and the first plastic garbage can during his 30-year career, addressed the changing design landscape. “Today I’m convinced product design is a three-sided discipline — business, art and science, and I am thoroughly convinced that you have to have an equal balance of knowledge in all three areas.”

Harrison, one of the first African-Americans to pursue a design career, said his favorite creation would have to be “that refuse container, sometimes known as a garbage can.” A professor at Columbia College in Chicago, said he has no plans to team up with Sears to create one-offs or any exclusive reproductions of his work. “I would very much like that, but Sears has not approached me. And Sears gets a mention everywhere I show up.”

Target has sponsored the design awards for the last three years.

The Fashion Design honoree, Ralph Rucci, said any award leaves him feeling humble that he is able “to do this with my life.” But with this honor, “It’s almost as though the aesthetics of America have understood what I have been trying to do for the past two-and-a-half decades,” he said.

Thom Browne, a two-time Fashion finalist, was honored just to be at 1600 Pennsylvania Avenue. “It’s always nice coming to the White House,” he said. Browne’s signature high-water pants drew more than a few curious glances, including those from several military guards.

Win or lose, nominees were grateful for the attention. Product Design winner and Antenna Design co-founder Masamichi Udagawa said, “It’s great to have the recognition, but at the same time being a designer is a long, hard endeavor.”

Toms Shoes founder and the People’s Choice Award winner Blake Mycoskie was more ebullient, sharing laughs with the First Lady, whom he has known since he was a child. “We were laughing about how she used to make sure I didn’t drown in their pool, and here I am today. This has been a pretty amazing experience. Life — you never know what will happen.”

Susan Weiler, principal of Olin Partnership, the Landscape Design winner, relished the cross-disciplinary, design-minded crowd. “This talks about art in America in a way that people need it and use it. There is nothing more wonderful than seeing people use the public spaces we have created,” referring to the Bryant Park and Columbus Circle restorations, Gap headquarters and other Olin-designed properties.

Communications Design honoree Scott Stowell agreed that design’s purposefulness sets it apart from anything ornamental. “That’s why it’s not art, I guess. We fix things for people.”

Given all the Champagne flutes, elaborate canapés, decorative pastries and presidential portraits, honorees couldn’t help but see themselves as ambassadors of design. “I guess now it’s official, since we’re here,” Stowell said. “You can’t be a designer and just work in your studio for yourself.”