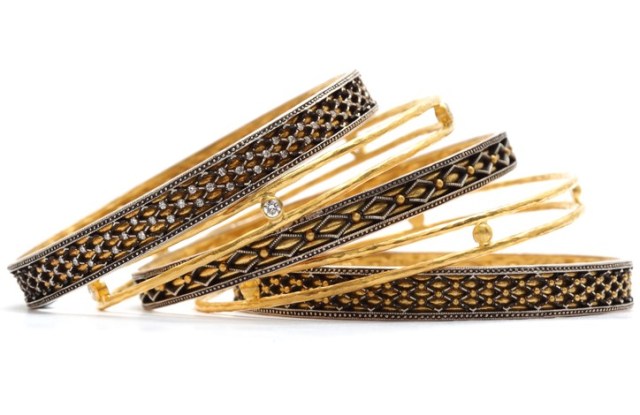 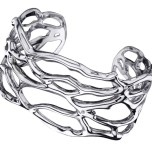 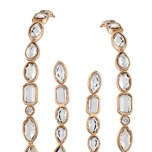 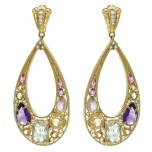 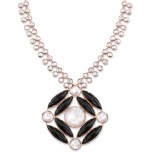 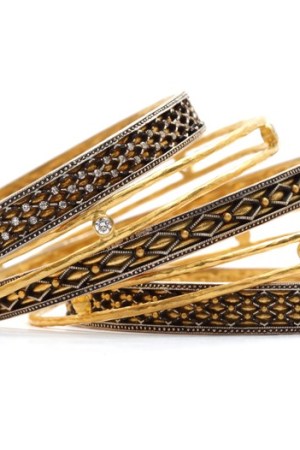 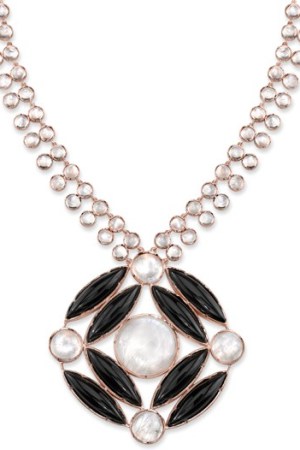 As a result, buyers, encouraged by signs of economic recovery despite persistent volatility, had plenty of design-driven trends to choose from at the jewelry trade shows here this month.

From fresh approaches to using gold, along with mixed metals and colorful stones, there was a focus on value — as well as keeping an emphasis on quality.

“Just because something is beautiful doesn’t mean it is expensive,” said Roberto Coin, who showed at Couture. “We can’t impose on people to buy at a certain price level, so we must give them opportunities at different price points. It’s affordable luxury.”

Key among Coin’s offerings were gold cocktail rings featuring colored cabachon stones priced at $5,000 and $8,000 each at retail.

With the recession generating high anxiety during the shows last year, there were fewer exhibitors and retailers, as the fine jewelry paradigm shifted. The self-purchasing customer was out and brands offered lower-priced collections and counted on special occasion purchases such as birthdays, anniversaries and graduations, along with more casual pieces.

There was a more positive mood this year. Buyer attendance was up 20 percent at JCK Las Vegas, which ended a four-day run at the Sands Expo & Convention Center on June 7, and a substantial increase was reported at the Couture show from June 3 to 7 at the Wynn Las Vegas.

“It was exciting to see designers once again introducing new pieces to their collections,” said Cody Kondo, Saks Fifth Avenue group senior vice president and general merchandise manager for fashion and fine jewelry, watches, women’s shoes, handbags and soft accessories. “We believe our customers will respond well to these new pieces.…We are seeing customers who are interested in higher price points, unique pieces. Our customer is also drawn to the emotional appeal of fashion jewelry.”

“This is overall a different show than last year,” said Greg Kwiat, chief financial officer of Kwiat, who doubles as chief executive officer of estate jeweler Fred Leighton. “Retailers are looking forward…to what could be a good recovery. They are writing orders and refilling their showcases. They are ready to be back in the business of selling important jewelry, and we have designs that have been pent up for the last two years.”

Asked if there was more willingness to spend, Brian Ripka, president of Judith Ripka Creations, said, “Absolutely. [The mood] is very positive and optimistic. We were pleased by increased traffic and sales and experienced no price resistance. Retailers…now have a clearer vision of what to purchase. Their customers are looking for value within a known fashion brand.”

Judith Ripka’s new designs — featuring dense settings of colorful stones, were a departure from her textured gold and silver signature looks. Doublets and gemstone slices inlaid with pavé work also made bold statement pieces at price points ranging from $2,400 to $30,000.

Yossi Harari, marking his 10th year in the business, also veered from his signature mix of yellow gold and oxidized silver with a colorful collection inspired by the jewels of Istanbul’s Topkapi Palace.

“Coming out of the recession, color is so refreshing,” Harari said. “Also, price wise, it’s easier to buy. Right now everyone is thinking twice about where they spend money. You can’t forget the reality. You have to be affordable.”

Gemstone and diamond slices were popular with designers such as Nina Runsdorf, Jemma Wynne, Irene Neuwirth and Christian Tse.

“I’m using alternative materials that make more of a statement rather than making diamond pieces smaller,” Tse said. “Colored sapphires give a bold look without being heavy, and they wholesale for $2,000 to $3,000, as opposed to a $50,000 retail price point for diamond earrings of the same size.”

For Neuwirth, the emphasis was on statement pieces, which she described as “our saving grace. We completely lost the middle price point in our business. Everyone is responding to big stuff, the mix in unusual color and a lot of rose gold.”

Pam Hyneman, a buyer for Camden & Co. in Jonesboro, Ark., said her spending was up.

“We are buying more than we did last year, at both the modest and extreme price points,” she said. “That middle ground has disappeared because they [customers] had money backed into their homes and don’t have a lot of disposable income. Today, the millennial customer wants designer everything, and our older customer is a collector looking for brands, so we are going back to bread-and-butter boutique jewelers like John Hardy, Pianegonda, Rodney Rayner, Buccellati and Doris Panos, who offer a range of price points.” She also bought into new lines, including Ivanka Trump, which offers a classic look with a known name.

Whether a buyer’s idea of a value-priced piece is $3,000 or $30,000, designers brought creativity and color to the table at both shows.

“I like what I am seeing; everyone is trying to be more innovative with a slightly lower price point,” said Tristin Tracy, a buyer for Silverhorn in Santa Barbara, Calif.

“I’m looking to offer our customers something not everyone else has,” she said. “We are loyal to companies we’ve worked with in the past but are also looking at some new things.”

Other key trends included the innovative use of gold. With prices of the precious metal at a near record level, jewelers have found new ways to make statement pieces that aren’t as weighty or costly. Ray Griffiths and Hearts on Fire featured open-work pieces. Marco Bicego showed thin bangles retailing for less than $1,000 each, as well as engraved hollow gold beads retailing from $695 to $13,700.

“I’m trying to be a designer and a businessman,” Bicego said. “We pay attention to price point so people can buy more.”

Gurhan introduced a line called 424 in which he combined 4k and 24k gold, and Yosi Harrari created a new gold-silver hybrid called gilver. Sterling silver continued to be popular and several designers offered the same piece in gold and silver versions.

Jewelers such as Nam Cho and Ivanka Trump used more white sapphire and rock crystal in place of diamonds to keep price points down. Greens and blues replaced purple as the color of choice at Stephen Webster, Carol Kauffman and Erica Courtney, and layering and stacking were key looks at David Yurman, Pandora and Robert Lee Morris.

Many buyers, including Rita Edwards of BC Clark in Oklahoma City and Darlene Schuring of Gasser Jewelers in Canton, Ohio, were in search of versatile day-to-evening pieces in entry-level to statement price points. “Trends like color and large rings should do well for us,” Schuring said.

Other buyers, like Christie Pina, category manager of collections and gold for Florida-based chain Birks & Mayors Inc., hunted for traditional pieces retailing between $5,000 and $10,000.

“We are still looking for classics like straight line bracelets and Riviera necklaces from proven brands because women are willing to buy basics, but they are not ready to go for bigger pieces,” she said. “Maybe next year.”