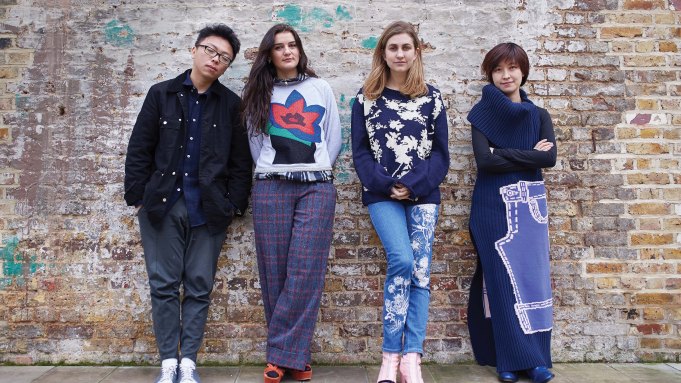 Backstory: Surrey-born Alice Archer graduated from the Royal College of Art in 2013 after studying fine art at Goldsmiths and Central Saint Martins. She collaborated with shoemaker Caroline Groves from 2009 to 2013, designing bespoke and one-off shoes for clients.

Since 2009, she’s been working with Tracey Emin, hand-embroidering versions of the artist’s drawings and paintings onto her own designs. Archer spent six months in Antwerp as a design assistant to Dries Van Noten in 2013, and spent part of her time there traveling to Calcutta to source fabrics and prototype embroideries.

The designer described her customer as “timeless, rich in color and attention to detail. She’s strong and unapologetic. An English rose with a twist.”

“This season, I’m playing with new shapes and new fabric mediums such as jacquard woven fabrics and velvet and chunky hand-knitted [sweaters],” Archer said, “while still using duchess silk satin and crepe de chine silks — which are the backbone to my collections.”

Prices start from 350 pounds ($500) for an embroidered silk satin scarf to 2,000 pounds ($2,900) for a long duchess silk satin skirt. Her line is stocked in stores including The Place, Browns and Tasoni.

Backstory: Sadie Williams studied textiles at Central Saint Martins and graduated with an Masters of Arts in 2013. A recipient of NewGen sponsorship, supported by Topshop, Williams won funds to exhibit her collection during London Fashion Week. Sadie was a part of Selfridges “Bright Young Things” initiative in 2013, where she sold a collection of embossed minidresses and Lurex-print sweatshirts. Her MA collection of “totemic” dresses were showcased in her own Selfridges window on Oxford Street. In 2014, she launched a capsule collection designed for Swedish high-street label & Other Stories. She designed a collection for Barbie and launched her fall 2014 collection of miniature gowns during London Fashion Week.

Known for infusing her signature metallic embellishments to her playfully bold and textile-driven aesthetic, the designer notes that her customer is “someone who is a bit tomboyish but enjoys dressing up and a bit of sparkle, too.”

Williams will be introducing a new textile in her upcoming collection. “We are combining some special new fabrics with some of my textiles I’ve innovated and used previously,” she said, “but this time translated into different shapes and print arrangements. This time, I’m working on some knitwear for the first time, too.”

Backstory: Canadian-born Steven Tai moved to London in 2007, studied women’s fashion design at Central Saint Martins and graduated in 2011. Before launching his own label, he interned at such brands as Hussein Chalayan, Viktor & Rolf, Stella McCartney and Damir Doma, where he worked on toiles, fittings, research, illustrations and show preparations. While interning at Stella McCartney in 2012, Tai won the Chloé Award at the Hyéres festival, where Yohji Yamamoto served as a fashion jury president. Tai showcased his spring 2013 collection during Berlin Fashion Week in association with Elle magazine in 2012.

“The Steventai woman is nerdy, awkward and ironic,” he said. “She’s the type of girl who might be out for a drink but really would much rather be home devouring Netflix and snacks in bed. She appreciates humor in clothes and dresses for herself, not others. I think she would be a mix of Willow Rosenberg, Daria, and Enid & Rebecca from ‘Ghost World.’”

The 32-year old designer describes his aesthetic as “dorky yet feminine.” Signature pieces include a sweater vest, glasses, shirts, skirts and “a slightly underwhelmed smile.”

Family ties were his focus for fall. “I looked at old souls and the idea of feeling old when still actually very young,” said Tai. “There’s a lot of textile experimentation that is nostalgic and reminiscent of grandparents.”

Backstory: Born in the Chinese seaside town of Qingdao, Xiao Li moved to London in 2007 where she studied for a Bachelors of Arts in fashion, women’s wear, at the London College of Fashion. Li focused on knitwear at the Royal College of Art, where she graduated with a Masters of Arts degree in 2013. She previously worked with designers including J.W. Anderson, Alexander McQueen and Anya Hindmarch.

Li won the Diesel International Talent Support prize in 2013 — an accolade that led to a seven-piece capsule collection in collaboration with the Italian brand. She received the Mercedes-Benz China Designer Award last November for her spring 2016 collection.

The designer, who notes her aesthetic as “a modern silhouette combined with innovative fabrics and textiles,” sees her woman “embracing the new.”

“We are experimenting with a number of fabrics and techniques this season. Key highlights include knitted shoes,” Li said. “This is something I’ve wanted to do for a long time and despite the many challenges we faced with making them, we have succeeded. Silicon makes an appearance in various guises; moulded accessories, lace printed, etc.”

Backstory: A.F. Vandevorst is hardly new to global fashion watchers, but it is new to the London show scene.

After graduating from the Fashion School of the Royal Academy of Fine Arts in their home base of Antwerp in 1991, An Vandevorst and Filip Arickx launched a shoe collection in 2003, followed by lingerie in 2006. The designers describe their signature aesthetic as “avant garde, rock ’n’ roll with a gender twist.” Their client, they say, is an “opening-minded, art-loving nomad.”

After showing in Paris for more than a decade, the husband-wife team have moved their show to London. They see the move as a “new and different challenge,” and praised the support they received from the British Fashion Council, “which has given us a chance to express our creativity in a new way and to once again challenge ourselves,”

For fall collection, designers are experimenting with tailoring, and have teamed with Scabal, a Belgian men’s tailor, on four suits adapted for women.