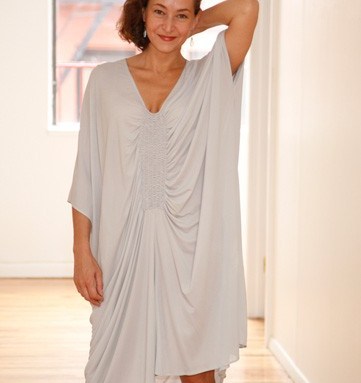 Stylishness is a prerequisite for designers, but apparently thriftiness is not lost on them either.

Now that summer is upon us — though the weather, like the financial forecast, has been less than sunny — women who work in fashion have incentive to shop. But like the customers they design for, several of 17 designers and other industry insiders contacted said their purchases have been minimal and they will work a deal where they can.

For example, Rachel Roy used her Jimmy Choo discount to offset the price of two new pairs of shoes; Ling Tan bought a bunch of Banana Republic $17 tank tops online even though she models for the brand, and Amy Chan gladly charged herself $550 — the cost of making a prototype for the navy topaz tile bag, which will hit Intermix stores exclusively in August.

Others have allowed themselves certain indulgences, such as Vera Wang, who has stocked up on “loads of T-shirts” from labels like Preen. While not her intention, those staples could be chalked up to market research, since as she said, “T-shirts are so much a part of what I do,” gesturing toward the silhouettes in her resort collection. “I’ve been thinking about doing T-shirts.”

Nicole Miller’s two recent picks include the practical and the fashion statement — an Acne tunic that she “loves” and a pair of Yves Saint Laurent platforms. Eunice Lee, the designer behind UNIS, a downtown store and sportswear label, shares Miller’s approach to summer style. Lee’s “one gift” to herself was a pair of $550 Dries Van Noten shoes. Her new $110 Nike running shoes will be used to exercise, just as her new $10 bike blinkers will ease her treks around town.

“A lot of us have pared down to the stuff that makes us happy even on small levels,” said Lee. “One thing I haven’t really compromised on is anything that enhances my day-to-day lifestyle, whether it’s a weekend out in Montauk, having dinners at home or out with friends or anything like that. I have been riding my bike a lot more. The more you ride in the city, especially at night, the more you realize how you could have been hit many times.”

Nearing the completion of a new apartment that has been four years in the making, Lela Rose treated herself to a Pierre Paulin eight-piece circular sofa from the Seventies that she just could not pass up at Gueridon in Brooklyn. Widely known for his unusually shaped chairs, the designer created the interiors at the Elysée Palace in Paris for former French presidents Georges Pompidou and François Mitterrand. Unbeknownst to Rose, Paulin died earlier this month.

Rose also bought a Corona Chair by Paul Volther that was designed in the early Sixties. She picked it up at Rago Arts, a Lambertville, N.J.-based auction house and was delighted the same style chair was recently sold at the Los Angeles Modern Auction for more than she paid. “Doesn’t that always make you feel better although it is completely irrational?” Rose said.

Gemma Kahng has also been busy doing a little wheeling and dealing, unloading her old Azzedine Alaïas and other designer finds on eBay. One sale alone more than covered the cost of her new Christian Dior sunglasses. “I know they are not very unique and it’s a big name, but they cover everything,” she said, showing how her new shades shield her eyes and most of her forehead. “But I’m not really spending money these days so much. I’ve actually been selling a lot of my old clothes on eBay. I just sold an Alaïa black corset for $750 and I paid close to $1,000 for it in 1992. I just realized I have a fortune in my storage. I’m not buying — I’m selling.”

Chan made no bones about buying her own bag, which is part of a capsule collection made exclusively for Intermix. “I had to pay for it, of course. I had to charge myself what I paid to make it,” she said. “But I gladly purchased it, and now I’ve got my bag for the summer.”

With returns being an increasingly common part of the new retail reality, WWD asked the style-minded if they had returned anything recently. Chan was the only one with something to declare — a leaky inflatable canoe to Steven Toys in the Hamptons. “It just wouldn’t float,” she said.

Lexy Funk, co-owner of Brooklyn Industries, an 11-store operation, also believes in supporting the brand. She used her 50 percent employee discount to buy the $78 Tirata Beach sundress, a pair of $68 Park Slope white jeans and the $34 G-G-Glamour T-shirt. The dress can be worn to work, transitioned for after work or to go to the beach, and the other combo makes her white outfit for the summer. “I feel guilty for buying other clothes. I’m also trying to save some money,” said Funk, who was a finalist for Ernst & Young’s Entrepreneur of the Year award for consumer goods and retail and is eyeing a site for her first Boston store.

In line with her own Brooklyn-made business, she has bought Cog & Pearl’s handmade $140 puzzle necklace at the Diana Kane boutique in Park Slope and $181 Cydwoq vegetable-dyed leather sandals. “For me, handmade jewelry and shoes are very interesting especially in these economic times. It’s worth supporting local designers,” Funk said.

Designer Thuy Diep, whose label is her first name, also wears mainly her own collection. “In the summer, I layer and mix-and-match light items. My purchases have been modestly limited to accessories and shoes: a vintage belt I bought in Rome on a recent trip, a Margiela necklace and few pairs of Marc Jacobs shoes,” she said.

The model Tan is supporting a brand that helps her earn a paycheck. As an online model for Banana Republic, it was only fitting she bought the brand’s organic cotton tank tops online and was particularly pleased with the light green and dark green styles. “It goes with the theme — green, organic,” she said.

Ports 1961 designer Tia Cibani’s summer must-have is MAC fuchsia nail polish for her toes, which she said “goes perfectly with all of my colorful Havianna flip-flops.”

Others have dove into summer with a little luxury. Roy said she splurged on two pairs of Manolo Blahnik shoes — “one strappy jeweled number with an amazing ostrich heel” and “red-orange suede pumps that make my legs look tan and elongated.” “It is hard to walk into his boutique and leave with nothing. Both were complete emotional purchases,” she said.

Tina Lutz, cofounder of Lutz + Patmos, recently bought a soft and “superthin” Helmut Lang leather jacket that can be worn like a cardigan or layered under a coat in the winter. “When I purchase something, it needs to be special — something that I cannot find in my own collection,” she said.

Cari Modine said she plans to buy two or three Isabel Toledo dresses, but that will be the extent of her shopping until next season. “I don’t have a hankering to shop. It’s all about necessity right now. What do any of us really need?”

Thelma Golden, chief curator at the Studio Museum in Harlem, has her designer husband Duro Olowu to thank for her new sleeveless silk chiffon Orpheus dresses, which she intends to wear all summer.

Sandy Schreier has added a black floral Thakoon dress to her wardrobe even though she owns 15,000 couture and designer pieces. She said of her latest buy, which she paired with leggings and a Yves Saint Laurent necklace, “It’s fun, it’s comfortable and it doesn’t wrinkle. I always look for things that will look great with my accessories, because clothes are the background piece.”

Edelkoort Inc.’s Li Edelkoort and Emmanuelle Linard just bought the same draped dress by Martin Margiela Ligne 6 at Fred Segal in Los Angeles. Edelkoort, who has stepped down from her role as director of the Design Academy Eindhoven to focus more on her trend forecasting business, bought the ample and fluid dress in black, and Linard chose the pale blue marble one.

“This dress is fantastic and has become a new feminine basic for our wardrobes. In times like these when we need lasting essentials, it fits any woman, any age and any occasion. It can worn for evening with bijoux and sexy heels, in the afternoon for city shopping on top of jeans or Zouave pants with flats or sneakers, or as a beach tunic with Grecian sandals,” Linard said. “Trend Union believes in fluidity as the next big movement for the seasons to come.