A host of newcomers are set to show during Mercedes-Benz Fashion Week Australia, which starts Sunday. 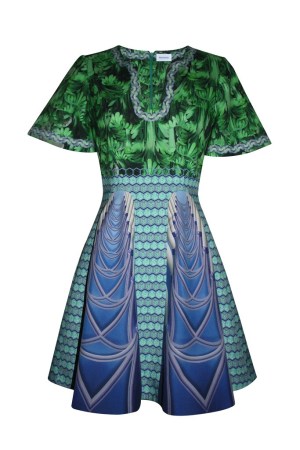 SYDNEY — Due to a soft retail market and unprecedented competition from international retailers, a raft of Australian fashion labels have closed their doors over the past two years — while others, such as Zimmermann and Sass & Bide, are focussing marketing efforts on the runways of New York as they power ahead both locally and internationally.

The end result for next week’s Mercedes-Benz Fashion Week Australia is a little less Oz fashion establishment than usual — while more than half of the 72 brands on the schedule are up-and-coming names.

Here, a look at some of the newbies:

Sydney sisters Rachel and Alex Sims graduated from the city’s Whitehouse Institute of Design and the College of Fine Arts, respectively, in 2012, before travelling to London. There, Alex, a fashion designer, interned for Swash, while Rachel, a textile and print specialist, interned for Mary Katrantzou and Peter Pilotto.

On April 10, the duo will show their first commercial collection as part of the group New Generation show. “The Lost Wanderer” is a 17-piece collection of fused silk organza dresses and separates featuring A-line silhouettes and hand-pleating, with all garments boasting the brand’s signature engineered digital prints — in this collection’s case, inspired by European art galleries.

The duo’s highly labor-intensive approach sees each print designed specifically to the shape of the garment. “The print might curve around the shape of the hem, a few garments have curved hems,” said Alex. “Every print on each garment is unique to the garment and not repeated at all, which is good I think because every piece is unique.”

Desert Designs was born in 1985 in the maximum security section of Fremantle Prison, when teachers Stephen Culley and David Wroth met indigenous Australian prisoner Jimmy Pike during an art rehabilitation program. Impressed by Pike’s natural talent, Culley and Wroth set about helping him translate his expressionistic felt-tip pen designs onto printed fabric. Desert Designs grew into an international fashion-textile licensing business. Following Pike’s death in 2002, it disappeared from the market.

Fast forward to 2013 and Desert Designs is blooming again in the hands of two Gen-Y designers: Culley’s daughter Jedda-Daisy Culley, a conceptual artist, and Caroline Sundt-Wels, a stylist. On Monday, the duo will make their solo runway debut at Mercedes-Benz Fashion Week Australia with “Together Towards the Water,” a 60-piece collection inspired by three artworks from Pike’s archive of 1,000-plus designs. Modelled by both indigenous models and students from the Bangarra Dance Theatre, the collection will be comprised of Desert Designs’ regular printed stretch cotton and silk streetwear, plus a new swimwear capsule line and a new, high-end fashion range.

“Whether it’s art, fashion, through culture, lifestyle…people are looking for alternative philosophies and to discover new cultures for inspiration,” said Culley. “What’s so lovely about this brand is that the story and the history were already laid out for us.”

The brand is making its solo runway debut on April 10 with an off-schedule, off-site show at the Intercontinental Hotel. Attendees can expect more of the acid-bright luxury streetwear with which Nadia Napreychikov and Cami James have garnered a cult following since meeting at Melbourne’s RMIT University in the final year of fashion design degrees and then kicking off the brand in 2009 via a blog.

There are two lines, beginning with Tra$h, the entry-level ready-to-wear range of printed and sequinned crop tops, biker shorts, slouch pants, hooded shirts and microdresses for under 300 Australian dollars, or $277 at current exchange. But key to the label’s DNA is the Arti$anal range of more heavily embellished, studded and fringed showpieces, made in Bali, where James is based. These sell for up to 5,000 Australian dollars, or $4,620. The spring show will feature 30 new Arti$anal looks inspired by Seventies punk.

Although still very much under-the-radar in Australia, Di$count Univer$e has captured the attention of some of the biggest entertainment names, who seek out its showpieces to wear to awards shows, on tour and in video clips. Fans include Britney Spears, Iggy Azalea, M.I.A., Kreayshawn, Katy Perry and Miley Cyrus, whose stylist Simone Harouche bought one of the brand’s psychedelic tie-die “PRAY FUR YR LYF” T-shirts from the company’s online shop last year. In October, the shirt turned up on Cyrus in a risqué portfolio shot by Terry Richardson, which went viral. Cyrus loves the T-shirt shots so much she even struck a deal with Napreychikov and James to incorporate the images in four pieces of official merchandise for her current Bangerz world tour.

Di$count Univer$e isn’t the only antipodian brand getting some pop-diva love. The neon Neoprene bikinis of two-year-old Sydney and Bali-based swimwear brand N.L.P. feature prominently on dancers in the “Blow” video clip from Beyoncé’s latest album, while one of N.L.P’s signature color-blocked Neoprene bikini tops is worn by British model Jourdan Dunn in Beyoncé’s “Yoncé” clip.

The brand name is derived from the initials of designer Nikki Lee Penny, a graduate of Sydney’s Whitehouse School of Design who later worked for the Alice McCall, Cue, Natasha, A.T.G and Shakuhachi brands before branching out on her own in 2012. Now selling to 20 stockists in Australia, the U.S. and Europe, Penny will make her runway debut at Mercedes-Benz Fashion Week Australia on Monday.

The spring collection, which will see crochet and Lycra panelling incorporated into the brand’s signature Neoprene, will be modeled by eight female members of the Sydney Dance Company, dancing to the moves of Melbourne choreographer Yahna Fookes and an original score by L.A. DJ Suzanne Kraft. The collection will also include a new 10-piece Lycra range of drop-crotch trousers, baggy shorts and yoga pants called N.L.P. Active. That line will retail for 150 to 250 Australian dollars, or $139 to $230, and will be available exclusively through the Australian activewear Web site stylerunner.com in real time as part of Mercedes-Benz Fashion Week Australia’s inaugural “Shop the Runway” consumer e-tail program.

A world away from the Bali-based embellishers and beach-bright, body-con aesthetic of Sydney, two-year-old Melbourne brand Strateas.Carlucci is so Euro-focused it already operates on a Northern Hemisphere timetable.

Winners of the 2014 Tiffany & Co. National Designer Awards, Peter Strateas and Mario-Luca Carlucci specialize in modern, constructed tailoring for both men and women. The palette is invariably monochromatic. “We like to express ourselves through fabric and form, as opposed to color and print” said Carlucci. “It’s about telling a story for us. It’s a continuum every season.”

On Monday, they will be present their first solo runway show at Mercedes-Benz Fashion Week Australia with the brand’s fifth collection, “Fracture,” the 80-piece fall line that was presented to buyers in Paris in March — with the addition of some new lighter silk trans-seasonal pieces and some skinny rib knits. Graduates of RMIT University — where Carlucci studied industrial design and Strateas, communications design — the self-taught designers first launched a men’s streetwear range called Trimapee in 2006, but switched focus six years later to create their new luxury men’s wear brand, launching it in a Paris showroom in January 2012. Shortly after, they followed up with a women’s wear collection. The brand currently boasts 25 stockists — but only two of them are in Australia. Prices start at 200 Australian dollars, or $185, for a long-sleeve silk top and can reach 2,500 Australian dollars, or $2,310, for a kangaroo leather biker jacket. Resin-coated Australian merino wool is another favorite fabrication.