Six more up-and-comers who you should know. 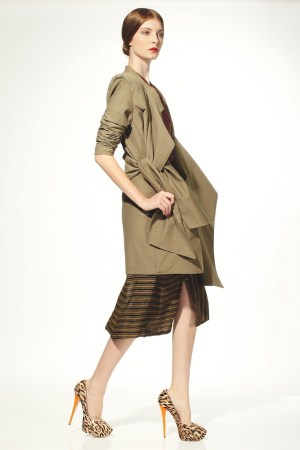 The second day of WWD’s designers-to-watch feature includes six more up-and-comers who you should know.

NOT BY JENNY LAI

Brand philosophy: “An androgynous feel, where femininity is explored through unusual perspectives.”

Brand philosophy: “It’s very inspired by Bianca Jagger, Katharine Hepburn and Patti Smith — their spirit and style and how strong and independent they were.”

Designer: Kathy Rego; based in Philadelphia.

Brand philosophy: “We wanted to do an updated version of suiting. Since my background is in fit, we have spent a couple years perfecting the pant fit.”

Retailers: 25 stores, including Atelier in New York and Restir in Tokyo.

Brand philosophy: “There are no ‘show’ pieces made only for presentation. Every garment is created with the intention of being produced and worn.”

Wholesale prices: $65 for a basic jersey T-shirt or silk cotton tank to $750 for embroidered lace pieces.

Brand philosophy: “Laid-back ease — that accessible luxury quality, and it’s all made in the U.S. I also like contrasting the tomboy versus the classic chic kind of sexiness.”

Wholesale prices: $80 for a mélange jersey turtleneck to $465 for a wool coat with fox collar.

Brand philosophy: “I love the idea of the unexpected — an old woman dressed to the nines walking down the street, a street-style kid from the Bronx who looks like he takes better care of his shoes than I do. That’s the kind of thing that makes my wheels turn.”