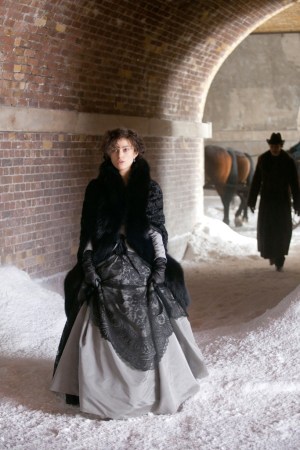 Anna Karenina never had it so good.

Two million dollars’ worth of Chanel diamonds and vintage Balenciaga-inspired dresses are just a few of the finishing touches costume designer Jacqueline Durran has dreamt up for Keira Knightley’s fur-wrapped character in Joe Wright’s new film adaptation of the 1877 Tolstoy novel.

Perhaps best known for the scene-stealing emerald-green dress Knightley wore in Wright’s “Atonement,” Durran has once again made fashion a centerpiece in this latest film, which hits theaters Nov. 16. Rather than dress her in period costumes circa 1870s Russia, Wright suggested Durran draw from Fifties-inspired silhouettes for more of a contemporary spirit. After poring over photographs and paintings from the 1870s, she studied pieces from Christian Dior, Balenciaga, Jacques Fath and Lanvin from the Fifties. Traces of the latter are evident in the actress’ pillbox hats, asymmetric bodices, buttons and other subtle details. Through the Costume Institute at the Metropolitan Museum of Art, Durran got a closer look at the early dresses of Charles Frederick Worth, which provided further inspiration. The end result was the unlikely combo of 1870s skirt shapes with Fifties-inspired bodices, including one blue gown made of denim.

In a phone interview from her London office Tuesday, Durran spoke of the effort that went into every last look. “When we were discussing what color kimono Keira should wear, we had five different heads of various departments. It is a good thing to say that, because it shows how important each aesthetic is to his films,” she said.

Knightley was also waist-deep in the process, weighing in on color and fabric options, though never in the name of vanity. “Keira would never say, ‘I don’t like this dress. Everything is very rooted in the work,” said Durran, adding that the actress started each day on set by choosing from the Chanel baubles splayed out on a table before her. “Never in my experience on film sets have I seen anyone with such a range of diamonds and pearls. But I have to say it was very useful for Keira to have at her fingertips all this fine jewelry, as Anna would. It was the aura of Anna Karenina that we were creating,” she said.

But it wasn’t all sparkles and silk. Filmed over the course of 12 weeks, on 100 different sets, at one point Durran and some of the cast took an 18-hour journey from Saint Petersburg to the border of Finland — “I can’t even say the name of the place” — to shoot a snowy scene in the 32-degrees-below-zero climate. Durran designed more authentic looks for Domhnall Gleeson’s Levin character, but she did not want exact period costumes for Aaron Taylor-Johnson’s Count Alexei Vronsky or Jude Law’s Alexei Karenin. The fact that a ball, a horse race, a skating party and several other scenes were played out on what was meant to look like a deteriorating theater added another dimension to the Tom Stoppard-written screenplay.

Every last frame was meant to reflect the past but not to the nth degree. Wright noted that privileged Russians of that time “dressed as French people and read books on the etiquette of how to behave like a French person. Their ballrooms were often mirrored so that they could watch themselves and appreciate their own ‘performances’ as French people, and they were advised to keep one side of the mind French and one side Russian. The Russian side was always observing and checking the French side to make sure that you were behaving, or ‘performing’ correctly.”

After the crash course in Russian history that was “Anna Karenina,” Durran turned to a lighter assignment — a comedy starring Jesse Eisenberg as a deadbeat working in an office who meets his doppelgänger in a place that is meant to look like nowhere remotely familiar.