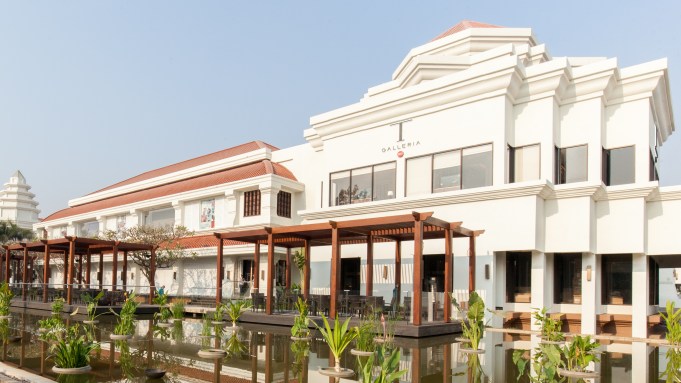 Siem Reap, the Cambodian city famous for its temples and Khmer ruins, is one of Southeast Asia’s prime tourist destinations. Now DFS Group is aiming to make it a shopping destination as well.

On Tuesday, the Hong Kong-based retailer is opening an 86,000-square-foot T Galleria by DFS store in the center of Siem Reap, a short walking distance from several luxury hotels and Angkor Wat, the iconic temple and UNESCO World Heritage Site. DFS, part of LVMH Moët Hennessy Louis Vuitton, is looking to tap into the growing number of tourists visiting Angkor Wat, particularly wealthy Asian travelers, and offering them a duty-free luxury department store.

“In Southeast Asia, it [Angkor Wat] is the major cultural destination. It attracts a very varied mix of travelers from all around the world,” said Philippe Schaus, DFS Group chairman and chief executive officer, who said Cambodia has the potential to become another Thailand in terms of its potential to become a duty-free shopping center. He compared the significance of the Cambodia outpost to the opening of DFS’ first store in Bali in 1990.

“This is really the next one of that magnitude,” he said. He declined to give a sales forecast or investment figure.

The T Galleria store will stock a mix of watches, jewelry, apparel, accessories and beauty items from a range of brands including Bulgari, Tiffany & Co., Bottega Veneta, Burberry, Gucci, Ralph Lauren, MAC and Bobbi Brown. It will also carry a range of local artisan products and handicrafts, such as items made from handwoven silks and woven lotus fibers. Some of these local goods will be sourced through Artisans d’Angkor, a socially conscious business aimed at revitalizing Cambodia’s traditional craft industries and providing sustainable working environments. The store, which will also house a Crystal Jade dim sum restaurant, will open in phases through June.

“To me, the time of the replication of shopping malls is really over and what you need to do is create a sense of localization, a sense of where you are,” Schaus said.

The executive said DFS is essentially targeting a captive audience in Siem Reap. Once travelers have visited the temples and ruins — something most people typically do over the course of a day or even several hours — there is little else to see or do in the town.

“We really want people to go there and spend some time and enjoy it,” he said. “We estimate that every single customer going to a luxury hotel will be a customer coming through this store.”

Until now, tourists to Siem Reap looking to shop for duty-free goods have had only one option. China Duty Free Group opened a 48,400-square-foot store in Siem Reap in 2013 stocked with cosmetics and accessories from more than 200 brands. Just over half the size of the T Galleria outpost, the China Duty Free store is roughly a 10-minute walk from the T Galleria store and a popular stop for tour buses.

Schaus did not have detailed information on the China Duty Free store but said he’s observed customer traffic there.

“For lack of a better proposal today, there are many people visiting that store,” he said.

Chinese tourists — who tend to favor buying luxury goods during their travels — are increasingly traveling to Cambodia. In 2015, Cambodia saw a 24 percent increase in the arrivals of Chinese nationals, according to data from the Ministry of Tourism.

Ho Vandy, co-chair of the Tourism Working Group between the government and private sector, said he senses a growing demand for luxury duty-free goods in Cambodia, especially from Chinese tourists. He said occupancy rates for luxury hotel chains during the high season between the months of October and March range from 80 to 90 percent.

At the Park Hyatt Hotel, rooms can cost up to $2,500 a night, and the occupancy rate varies from 70 to 100 percent. Sey Panha, who works at the reservation desk, said that the majority of their customers are from China. Down the street at Raffles Hotel, rooms range from $475 to over $3,800 a night, and the hotel is usually fully booked in January.