The space is the first major store design update for the brand since the opening of its store on Washington Street in Manhattan’s Meatpacking District in 2007. 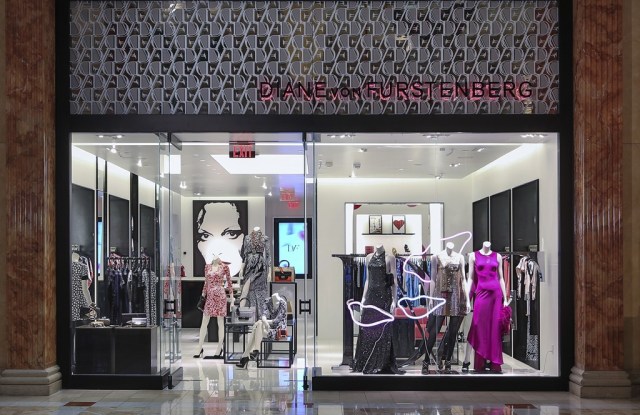 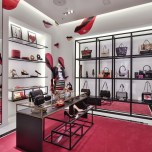 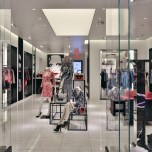 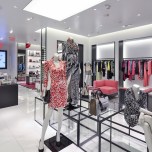 Diane von Furstenberg unveiled a new store prototype at The Forum Shops at Caesars in Las Vegas on Saturday.

The space is the first major store design update for the New York-based brand since the opening of its store on Washington Street in Manhattan’s Meatpacking District in 2007. Developed with Kramer Design Group, it comes as the brand is accelerating retail expansion and endeavoring to build a bigger accessories business.

“The brand was ready to release a new prototype,” said Paula Sutter, president of Diane von Furstenberg Studio LP. “We really felt like at this point in the brand’s growth, we were looking for a fresh take on our store design, and we wanted a store design that reflected all the brand attributes.”

Von Furstenberg said, “Las Vegas is such a lively place to be and we are so excited to expand our presence there. The new store concept is such a strong reflection of the brand.”

The 2,000-square-foot store has a gallerylike black-and-white interior that provides a stark contrast to the bold prints and colors used in the clothing. The store carries the full range of Diane von Furstenberg ready-to-wear, including dresses, sportswear, eveningwear and DVF 1974.

“You really see some of the things that are very much the DNA of the brand,” said Sutter. “We are a color authority, so having the black and white as a strong background was an important move. That is done with black steel frames.”

At the rear of the store is an accessories lounge featuring the brand’s iconic lip pattern that, at 500 square feet, occupies roughly twice the space of accessory areas in most of von Furstenberg’s existing stores. Accessories in the store are handbags, shoes, belts and sunglasses, and they are displayed on an illuminated tiered glass table at the store’s entrance as well as in the accessories lounge.

“This is a store concept that really shows the importance of accessories and the direction we would like to go in terms of building our accessory and shoe business,” said Sutter, who elaborated, “Right now, it is relatively small in relation to the size of our ready-to-wear business, but it is a big focus for us.”

The Forum Shops store is von Furstenberg’s second in Las Vegas. The brand was part of the initial 2008 retail lineup of The Shoppes at The Palazzo, and Sutter said it would remain at that shopping center.

The brand declined to specify exact sales of the Las Vegas locations. However, Sutter described the performance at the store in The Forum Shops as “really strong” in its initial three days. Industry sources estimate that the shopping center produces $1,600 in sales per square foot annually, meaning the von Furstenberg store should expect to register at least $3.2 million in yearly sales there. “We are superoptimistic. It happens to be a great city for Diane von Furstenberg. Our brand is right for Vegas,” said Sutter.