A look from the Diesel x Coca-Cola "The (Re)Collection" capsule.

MILAN — Diesel’s latest collaboration is a bubbly affair — and sustainable, too.

The Italian fashion label is teaming with Coca-Cola for a cobranded capsule collection dubbed “The (Re)Collection,” which is set to be unveiled with a special event in Paris on Sept. 28 at Galeries Lafayette.

News of the tie-up was first reported by WWD last week, after the OTB-owned label teased a save-the-date to the Paris event, cryptically including the Coca-Cola logo.

In addition to signaling fashion’s ongoing craving for cross-pollination and collaborations, the collection also highlights both companies’ commitment to sustainability, as the capsule incorporates recycled fabrics and materials, including textiles derived from PET Coca-Cola bottles, as well as recycled cotton.

“As a leading pioneer in denim and casual fashion, Diesel has always been known in the industry as an innovator. The (Re)Collection is a collaboration between two authentic and iconic brands that are both committed to a more responsible business,” noted Renzo Rosso, founder of Diesel and its parent company OTB.

“Inspired by our vision of the future, we are collaborating with Coca-Cola to explore new methods of creating fabrics, whilst challenging ourselves to incorporate recycled materials in our collections,” he added.

Comprising 12 seasonless items, the collection features urban pieces splashed with both companies’ logos. They include a unisex workwear-inspired denim jacket and baggy jeans with red stitching, both bearing the red Coca-Cola logo on the back, which also appears on denim women’s HotPants. Denim pieces are crafted from 38 percent of fabrics coming from post-consumer recycled PET bottles. 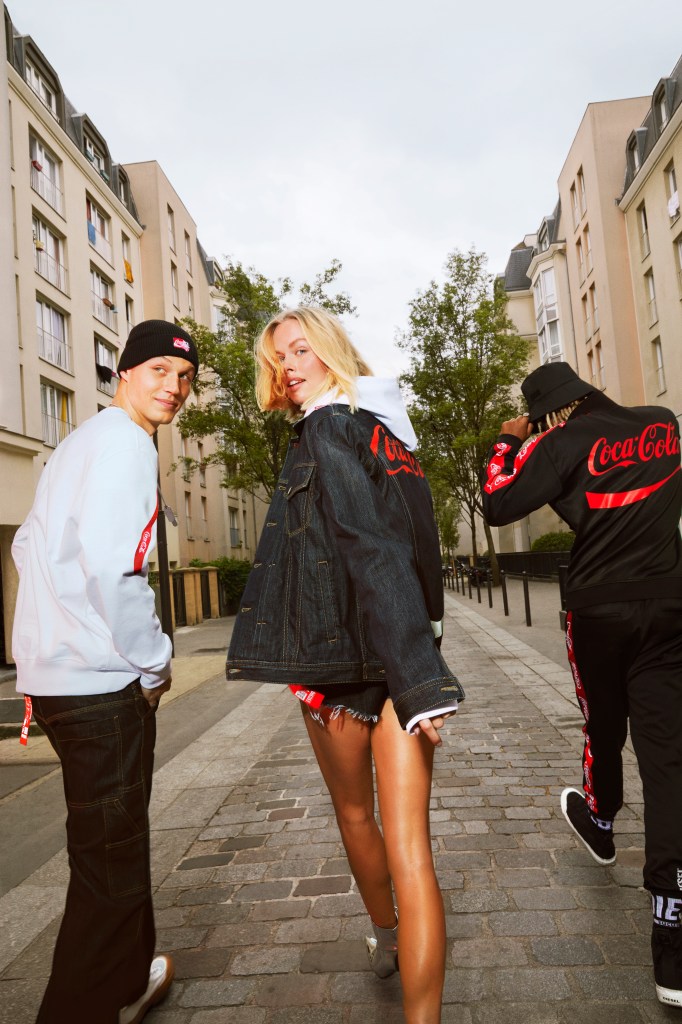 Black tracksuits are embellished with a red stripe running down the sides with the American company’s logo, while a gray hoodie combines both companies’ logos merged in a box-shaped print on the front. The hooded sweatshirt is made of 52 percent pre-consumer recycled cotton and 48 percent post-consumer recycled PET, equaling nine plastic Coca-Cola bottles.

In sync with the seasonless approach, a men’s swimming brief and a women’s swimsuit are also part of the collection.

Michelle Moorehead, vice president of global licensing and retail for The Coca-Cola Co., said “Not only does The (Re)Collection generate awareness of the importance of recycling in a very approachable way — by showcasing beautiful fashion created from recycled materials — [but] it’s also a collection that celebrates individuality.”

In keeping with the Italian brand’s provocative and irreverent communication, Diesel created an ad campaign linked to the launch of the collection.

Nodding to past Coca-Cola advertisements, the video depicts a range of characters sipping iced Coca-Cola from plastic bottles inside a 24-hour shop, while a voiceover says, “This is the best way to enjoy a bottle of Coca-Cola. But it’s not the only way,” before revealing details of the collection’s launch. The diverse group of models is seen strolling around landmark locations in Paris, including Avenue Montaigne and Place Vendôme while the voiceover repeats the collection is available at the most exclusive areas and pop-up shops. When the group reaches a boutique’s storefront, the voiceover ironically invites them to turn to a red trashcan bearing the recycle logo, opposite the store.

Following the launch event during Paris Fashion Week, Diesel and Coca-Cola plan to host a series of initiatives in key international cities, such as New York, London, Milan, Tokyo, Shanghai and Berlin, among other destinations.

The 12-piece collection is available starting Friday on a hidden page at diesel.com, which customers can reach by heading to a dedicated web site and scanning any recycling logo appearing on trashcans and packaging worldwide. Additionally, the collection will hit shelves at select Selfridges units in the U.K., on Alibaba Group’s Tmall and in select Diesel stores in Greater China. On Sept. 28, coinciding with the Paris event, the capsule will land at Galeries Lafayette, before a global rollout scheduled for Oct. 7.

In sync with the collaboration trend, Diesel has been experimenting with capsules, for example, teaming with Nicki Minaj and Italian rapper Fedez last year. It has also been focusing on the Diesel Red Tag project, which was launched as a capsule project in March last year in Paris, designed by Shayne Oliver, cofounder of Hood by Air. For the second Diesel Red Tag collection, OTB founder Rosso tapped Y/Project creative director Glenn Martens, followed by Gosha Rubchinskiy of GR-Uniforma. As reported, for the latest iteration of the Red Tag project, Rosso is collaborating with A-Cold-Wall on a capsule that will be shipped in December.