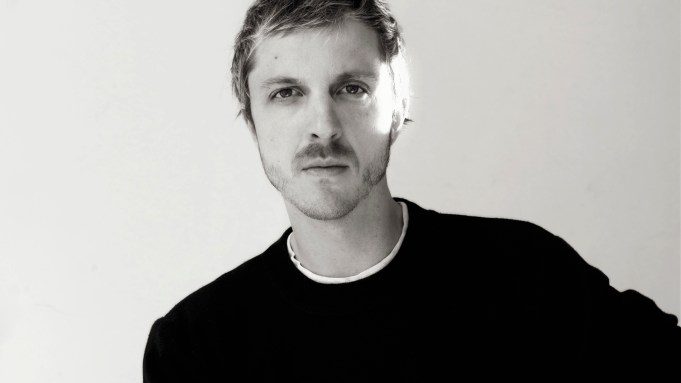 Glenn Martens, who has taken denim into a multitude of innovative directions with his Y/Project brand, has been named creative director of Diesel, WWD has learned.

The Paris-based designer is to join the Italian lifestyle brand immediately, overseeing style, communications and interior design. An official announcement is expected as early as today.

Diesel confirmed the hire exclusively to WWD, but demurred when asked when Martens might unveil his first designs for the brand.

The arrival of Martens, who has maintained a steady buzz around Y/Project since arriving at its creative helm in 2013, should bring a blast of creative energy and renewed attention on Diesel, which has not had a marquee talent at the helm since Nicola Formichetti exited in December 2017 after a four-year tenure as artistic director.

The Belgian designer arrives nine months after Massimo Piombini, previously chief executive officer of Balmain, was named ceo at Diesel, and amid brightening prospects for the flagship property of OTB, the fashion conglomerate controlled by Italian industrialist Renzo Rosso.

Rosso has had Martens on his radar for several years and tapped him in 2018 as a guest designer of its experimental capsule series Diesel Red Tag, one year after Martens bagged the prestigious ANDAM fashion prize, of which OTB is a historical sponsor and mentor.

“I know many designers and I just know Glenn is the perfect fit for Diesel, the first designer creative director of this brand in its 42 years of history,” Rosso told WWD. “Glenn has an incredible background, he comes from the Antwerp school, and I love the way he can pick iconic pieces and reinterpret them, denim in particular, with modernity. I have been following his work for years since he won ANDAM, and I know he can take Diesel, and its iconic global lifestyle, into the future. After all these years, I am happy to hand it over to someone who will carry it forward with new energy and a fresh vision.”

Martens, 37, said he is “extremely honored and excited to join the Diesel family,” lauding its values of “radicality, honesty and optimism.

“Diesel helped shape the way we see the future. Its unique voice has made it an undeniable icon,” he said. “Today, more than ever, I feel the need to celebrate these founding values, to build bridges through a message of hope.”

Martens plans to continue with Y/Project alongside his new responsibilities with the Italian group.

Diesel, which represents about 56 percent of OTB’s business, returned to growth in 2019, posting a 2.6 percent increase in sales. The brand has been going through a reorganization and streamlining and repositioning of its retail and wholesale channels.

While a complicated year for all fashion brands given the pandemic, Diesel added more fuel to speed its digital transformation in 2020, upgrading its e-commerce operations with a new omnichannel operating model dubbed Moon and launching a virtual showroom, HyperRoom, that sounds like some hip nightclub.

Its online business vaulted 40 percent in the second and third quarters versus 2019, with online now representing more than 12 percent of total sales, or 23 percent if Diesel adds the online sales of its wholesale accounts, according to the company.

On the design side, Martens fits the mold of the bold, edgy talents Rosso seems to favor, having famously recruited John Galliano in 2014 to helm Maison Margiela.

Martens grew up in the Belgian city of Bruges and graduated from Antwerp’s Royal Academy of Fine Arts in 2008. He was recruited by Jean Paul Gaultier — whom he has lauded as a “true inventor” — after Gaultier saw his graduation show and conscripted him as junior designer for his women’s pre-collection and the G2 men’s label. Martens became the first assistant of Y/Project founder Yohan Serfaty when that independent brand was launched in 2010. Serfarty died of cancer in April 2013, and Martens assumed the creative helm of Y/Project later that year.

Martens retained the foundations laid by Serfarty — the graphic, elongated sharp lines — while re-envisioning the brand through his own experimental lens. He also expanded Y/Project to women’s wear, which now represents the bulk of sales.

The label is carried in about 150 specialty stores including Browns, Dover Street Market, Selfridges, Boon the Shop, Lane Crawford, Addition Adelaide, Net-a-porter, Mytheresa.com, Matchesfashion.com, Ssense, Forward by Elyse Walker and Kuznetsky Most, according to the brand’s web site.

Martens likes to tumble together disparate references, from classical tailoring to streetwear to offbeat historical references, including Flemish Old Masters. He is also known for his avant-garde silhouettes incorporating exaggerated and twisting volumes.

The designer attributes his penchant for deconstructing and reconstructing garments to his first experiments as an interior architecture graduate, later adapting the process to cloth as a fashion student. “In the beginning my clothes looked more like boxes, everything was super-stiff. My very first skirt was basically a pizza box,” he told WWD in an interview last year.

From the outset, reconstructed denim has been one of Y/Project’s biggest product groups, which helped him attract Rosso’s eye when he initiated the Red Tag project to mark Diesel’s 40th anniversary.

“Glenn comes from Belgian training, so he has this practical-yet-surreal, Margiela-like sense,” Rosso told WWD at the time. “But then he’s young and modern, and knows how to appeal to a global, educated consumer, while simultaneously being able to experiment with denim.”

The designer approached the project with an inclusivity angle, insisting it was neither men’s nor women’s nor unisex, reflecting his widescreen vision of denim.

“It’s about personalizing your pieces — denim can become rough and masculine or sexy and feminine,” he told WWD at the time. “Diesel has always been very diverse, and talked to a lot of different kinds of people, so this fits in really well.”

Martens continues to win support from ANDAM. Earlier this year he was awarded 150,000 from the industry organization, which this year gave two “family fund awards” to support past winners in the wake of coronavirus in lieu of the traditional competition of previous editions.