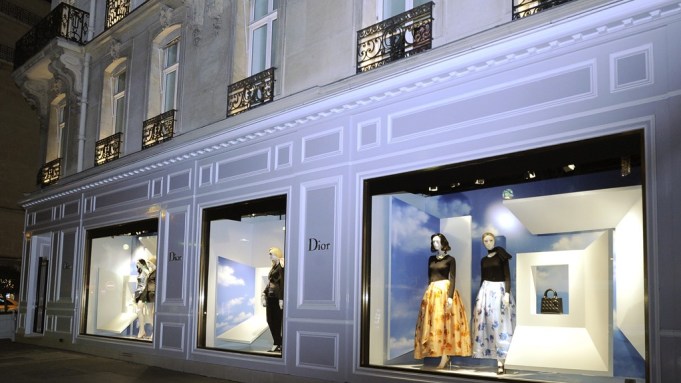 PARIS — Raf Simons’ first collection for Dior is arriving at retail this month, accompanied by fanfare on a global scale.

Dior is orchestrating a series of pop-up shops with key wholesale partners in the coming weeks, transplanting the decor and atmosphere of Simons’ ready-to-wear show in Paris last September to retailers including Joyce in Hong Kong, 10 Corso Como in Milan, Maxfield in Los Angeles, Isetan in Tokyo, My Boon in Seoul and I.T. in Beijing.

“This is a new New Look,” declared Dior chief executive Sidney Toledano, referring to the extravagant, fan-skirted silhouette that catapulted the French house to international fame in 1947 — and to Simons’ critically acclaimed reinterpretation of the founder’s legacy.

Toledano cited a groundswell of excitement among buyers for Dior’s new artistic director of women’s haute couture, rtw and accessory collections, and a desire to animate Simons’ debut effort’s arrival in stores. “We had a lot of demand, and we didn’t want to be everywhere,” Toledano said in an interview.

Spanning window displays, special furnishings, photo exhibitions and even a playlist of electronic music by French DJ Michel Gaubert, the installations — some measuring several hundred square feet — are slated to last for up to three weeks. The first debuted earlier this month at Jeffrey in lower Manhattan in tandem with New York Fashion Week.

An 11-day residency at Colette kicks off during Paris Fashion Week with an in-store cocktail party, where Dior is to launch the second issue of its in-house magazine, with model Natalia Vodianova on the cover in a hip-flared tuxedo jacket. Dior also plans an exhibition of photos by Willy Vanderperre and watercolor illustrations by Swedish artist Mats Gustafson at the concept store.

“We wanted our customers to be introduced to the new generation of Dior in an exciting and unique way,” said Andrew Keith, president of Lane Crawford and Joyce, citing “long waiting lists” for a number of exclusive items it will carry in Hong Kong. The Joyce pop-up will take over the majority of the ground floor of its 25,000-square-foot flagship on Queen’s Road Central.

“We are excited about the new creative leadership at Dior,” Keith added. “We have worked with Raf since the first season of his own line and we trust in his vision and ability to innovate.”

Some of the hoopla is permanent: Bergdorf Goodman just christened a new Dior women’s boutique spanning about 800 square feet in one of its most prominent locations on the second floor. It also recently added a 650-square-foot shop on its beauty level for Dior and has expanded its assortments of the brand’s leather goods and shoes.

The Manhattan retailer is planning a cocktail party and dinner in mid-March to launch “the new era of Dior,” along with window displays from March 6 and an eight-page insert in the next issue of its in-house magazine.

“Our commitment of the full bank of Fifth Avenue windows — along with the new shops, events and marketing — signifies the important and growing partnership between Bergdorf Goodman and Dior,” said Bergdorf president Joshua Schulman.

“We have seen great interest in the collection, both from existing Dior clients ready for a fresh interpretation of the house, and for an entirely new generation who is discovering Dior for the first time,” he said.

Dior is heralding the arrival of the spring 2013 collection in its own network of directly operated stores with new displays, and special presentations and cocktail events with clients.

The Dior flagship on Avenue Montaigne here unveiled its new windows Monday, mannequins and products set amid architectural fragments drifting in front of a blue sky dotted with clouds.

“We are a luxury house, but with a fashion tradition: It’s a balance between the savoir faire and fashion energy,” Toledano said, lauding Simons for bringing fresh verve to the innovations of the founder.

The executive declined to discuss figures, but characterized initial results as “very successful” based on trunk sales held last October in New York, Japan and Los Angeles, and on customer reaction in Sydney at the first Dior unit in the world to receive the collection. The 8,072-square-foot store, Dior’s first in Australia, opened Feb. 1.

“It’s a completely new proposal,” Jeffrey founder Jeffrey Kalinsky enthused. “Raf at Dior is greater than any expectation I could have had. It’s so individual and very true to Dior, yet different and very modern.”

As taken as he was with the spring runway show and collection, Kalinsky said that Simons continues to impress him. “[Dior] was probably my favorite pre-fall collection, period,” he enthused.

In tandem with the pop-ups, Dior enlisted a fashion blogger in each locale to build buzz.

“The man has got an indispensable knack for eliciting emotion,” Leandra Medine writes about Simons on themanrepeller.com. “And though easy to fall in love with the conceptual nature of where Simons obviously plans to take Christian Dior…there is nothing quite like seeing, touching and feeling the intricacies of his craftsmanship with our own hands to arrive at our respective deductions.”

Other bloggers include Chiara Ferragni of theblondesalad.com for Italy; Tina Leung of tinaloves.com for Hong Kong, and Yujingoon for South Korea.

Dior is also plotting a major, monthlong initiative at Harrods in London that kicks off next month, details of which are to be disclosed in the coming weeks.