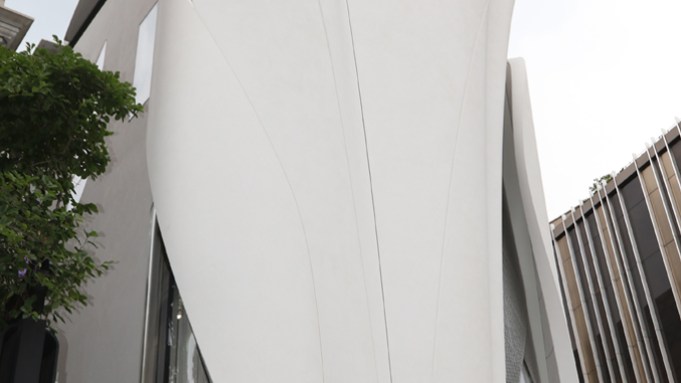 SEOUL — Dior is going for a lot of firsts in South Korea.

The brand will open its first freestanding House of Dior store here this weekend, which will also be its largest flagship in Asia to date. The official launch of the six-story boutique located in Cheongdam, Seoul’s luxury shopping mecca, will take place alongside the company’s first “Esprit Dior” exhibition at Dongdaemun Design Plaza on Saturday. “Esprit Dior” marks the brand’s third international event in this series, and will showcase original Dior designs, as well as collaborations with local Korean artists.

In spite of mounting concerns over the spread of the MERS virus in South Korea, Dior went ahead with its plans to host a preview of the new store on Wednesday. The event featured visits by LVMH Moët Hennessy Louis Vuitton chairman Bernard Arnault; Dior chief executive Sidney Toledano, and boutique designer and architect Christian de Portzamparc.

Still, because of the MERS scare, the event was kept low-key for safety reasons. International media and guests were absent, while local media and VIPs toured the shop in small groups.

Toledano was in town after attending the Tokyo leg of the Dior tour. The well-seasoned ceo said that despite the circumstances, the show must go on.

“We evaluated the situation and we decided that we had to open the store as well as the exhibition. Many people on my team have been working hard. We had to [come to] be with them,” He said.

Even with the worries regarding MERS, Toledano, who has been a regular visitor to Korea in recent years, said that the atmosphere is surprisingly normal. “Sometimes from outside [Korea], it’s a bit exaggerated. I understand people aren’t traveling right now, but I found the situation very normal.”

And not even Dior’s VIP clients could be deterred by the concerns. “They all came, nobody cancelled the visit,” he said.

Korea represents an increasingly important, growing market for the brand, he said. “The first time I came here was over 30 years ago. The luxury market was small. Koreans were working…more in building, engineering, textiles. And they have been successful. [Now,] the market is developing. This is why we believe that the future has even bigger potential and this is why we decided to [open this stand-alone shop],” he said.

“We do very well with the department stores [but] they only have limited space. We wanted to show all the products of Dior. …And we needed space also to sell to the clients. VIP rooms and space where you could even do presentations,” the ceo added.

Toledano said the boutique caters especially to busy VIP clients who need to shop and take a break at the same time. “They need a place to shop but they need a place to be entertained also. …At the top of luxury is time. …Fast fashion wants to [help you] save time, but we think taking [your] time is [something] for busy people. …With dedication, at the right pace, that is what we do here.”

He also mentioned Dior’s growing focus on China, despite the slowdown in luxury spending there. “We have been expanding in China. …We will create this [same] level of service [as in Seoul], VIP rooms, more rooms for categories for ready-to-wear and shoes. This will be exactly the same strategy in China. And also expansion in existing stores, we’re looking to increase the space by at least 50 percent [or] even doubling [it].”

He stressed that diversification was key to catering to the growing number of clients in Asia. “It’s not that I want to open new stores, but we need to expand the size of our stores because we want to better service the clients. [We are] not looking for traffic, but [to enhance] the quality of sales and services.”

The flagship, the outside of which was designed by French architect de Portzamparc with the interiors by American architect Peter Marino, features six floors including the basement, each dedicated to specific product categories such as bags and accessories, jewelry and watches, ready-to-wear and shoes and men’s. The shop even boasts a Versailles-inspired VIP lounge and gallery on the fourth floor. The boutique exterior flaunts smooth, stark white petal-like curved walls in front of a rectangular building decorated in the fashion house’s iconic grid-like pattern.

The fifth floor caters to pastry lovers, with a café by France’s own “Picasso of Pastry” Pierre Herme. The café serves Herme’s well-known macarons in an array of unorthodox flavors as well as a variety of French pastries and desserts.

Herme gave his own assessment of the MERS situation. “I’m very uncomfortable with the way that we assume things are bad. …Me, I don’t pay much attention. If it were truly dangerous [to be here in Korea], we would know it,” he said.

In addition to the store’s opening, Dior will continue with its plans to host the “Esprit Dior” exhibition launch event Thursday night at the Zaha Hadid-designed DDP.

“We wanted them to happen at the same time,” said Toledano, who cited that the exhibition will serve as a cultural accompaniment to the boutique opening, creating “different levels of conversation” going beyond just products and into culture and history.

The exhibition’s curator, Florence Muller, who has also collaborated with several Yves Saint Laurent projects, said the objective of the exhibition was to showcase Dior’s history alongside interpretations by different Korean artists.

“I think [Korean art is now] more autonomous, and they have their own language, and perhaps it’s because they are going back to their roots and to their techniques and their tradition. …It’s more specific in fact.”

Pieces on display include a hanging walk-in fixture by Lee Bul, who also designed a glittering, chandelier-like sculpture in the brand’s other Korean boutique. Other featured artists include Kiwon Park, who designed “Du Rose au Rouge,” an expansive array of flowing curtains ranging from pink to red. He was inspired by Christian Dior’s work with the colors pink and red, said Muller.

The highlight of the exhibition is a surreal “rose garden” of floral gowns from Dior’s most famous haute couture collections, including designs by Yves Saint Laurent, John Galliano, Raf Simons and Christian Dior himself.