By Miles Socha and Samantha Conti on May 31, 2016
View Slideshow 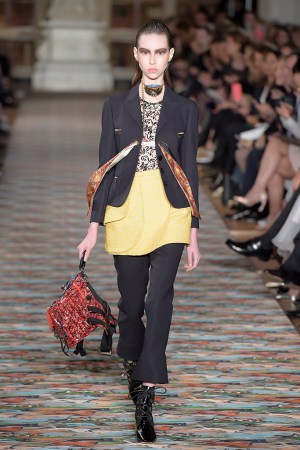 WOODSTOCK, England — Built in the early 1700s and still one of England’s largest residences, Blenheim Palace makes Downton Abbey look like a starter home. The monumental English Baroque structure was the venue for Dior’s cruise collection on Tuesday, which was tinged with eccentricity and winks to England’s hunting tradition.

Despite gray skies and an insistent drizzle (it is England, after all), the setting dazzled VIP guests who reached the Oxfordshire mansion, the main residence of the dukes of Marlborough, on an Orient Express train re-branded by Dior, with the dining cars decked in crystal stemware and fine linens embroidered with Blenheim Dior Express logos.

The two-hour-plus journey, replete with free-flowing Ruinart Champagne, continued with a fleet of 150 black Jaguars and Mercedes, slick with rain, that delivered guests to the palace. A lineup of trumpeters dressed in red military regalia serenaded guests as they climbed the stone steps to the entrance.

“This is probably the most opulent show I’ve ever been to,” marveled Kate Mara, who seemed even more petite amid the soaring ceilings of the library, whose pipe organ heaved in the build-up to the show. “We’re in a palace. It’s taken half a day to get here. And I love trains. I used to take them all the time from Bedford [New York] to Manhattan.” (Minus the three-course lunch and Dior branding, that is.)

In September, Mara and Ellen Page are coproducing and starring in “Mercy,” a love story.

Juno Temple said the experience was surreal. “We’ve fallen through the rabbit hole. It’s all so regal — and there’s something gothic about it, too, driving here in the rain,” said the British actress, who’s filming the second season of the HBO series “Vinyl.”

The palace itself was the starting point for Serge Ruffieux and Lucie Meier, who have headed up the design effort at Dior since Raf Simons exited the house in October.

“A clash of English eccentricity and French elegance,” said Ruffieux during a preview, where he and Meier showed off prints of hunting scenes that echoed those on the walls of Blenheim. The motif was repeated on the runway, with hand-painted depictions of horse riders, foxes and hounds.

Meier noted that they blended references to English aristocracy with African-inspired prints and Asian details — a wink to the English “taste for travel,” especially in the post-War period.

Dior-isms were there, too, with a variety of peplums — some stiff, some softly draped — a wink to the founder’s famous Bar jacket with its pinched waist and flaring hip line. The design duo also repeated his fondness for traditional English textile patterns like houndstooth, for floral prints, and his love of pockets, figuring clothes can be practical without losing their glamour.

The late founder was known to be superstitious and partial to good luck charms, which Ruffieux and Meier strung on handbags and costume jewelry, including foxes, owls and rabbits, as an ironic touch.

Models whisked through the salons like they were being chased by a ghost. The speed heightened the quirkiness of the collection with its mishmash of upholstery patterns, panels of ruching and voluminous couture sleeves.

There was a whiff of Miu Miu to the glam-rock boots with their carved, ridged gold block heels, the drab Seventies colors and the freewheeling layering. But the long tea dresses dotted with 3-D embroideries and the streamlined coats — some A-line, others with cinched waists — were pure Dior.

Dior confirmed Ruffieux and Meier are to take the bow after the house’s fall couture show in July. It’s their fifth runway outing for the brand, largely following the modernist template Simons had set.

The fashion house has been mum on its succession plan. According to market sources, the company has yet to conclude a contract for its next designer and has pursued discussions with a number of potential candidates, including Valentino’s Maria Grazia Chiuri, Alexander McQueen’s Sarah Burton and Proenza Schouler’s Jack McCollough and Lazaro Hernandez.

Tuesday marked the third time that Dior has shown at Blenheim, following catwalk presentations in 1954 with the founder and in 1958, with his successor Yves Saint Laurent, a year after Dior’s death.

Dior was a lifelong Anglophile and held his first London show at the Savoy in 1947, when England and France were emerging from the ashes of World War II. His British customers, in addition to Princess Margaret and the Duchess of Marlborough — included Nancy Mitford and Wallis Simpson (Dior made her shoes embroidered with her initials, and kilts for weekends).

Nine outfits from the 1954 collection — and Simpson’s shoes — were on display in the entrance hall, which guests could also peruse while sipping tea and nibbling pastries and finger sandwiches after the show.

Both Fifties events were fund-raisers for The Red Cross — at the time, the Duchess of Marlborough was president of the Oxfordshire branch — and saw Princess Margaret sitting in the front row. The 1954 outing was all about Dior’s New Look, with the second focused on Saint Laurent’s H-line silhouette.

The venue, The Long Library, with its collection of 10,000 books and imposing organ at one end, was the same for all three shows.

“It’s so spectacular,” said Elizabeth Olsen, who will next appear opposite Jeremy Renner in “Wind River.” She plays a young federal agent investigating a rape on a reservation. “I have a comedy next,” she assured, letting out a yelp of laughter.

Gemma Arterton is also tackling a difficult subject for the next film she’s producing,“The Escape.”

“It’s about a woman who leaves her children. It’s a very taboo subject,” she said, noting she would also return to the stage for a Joan of Arc play at the Donmar Warehouse.

Of the show venue, she said, “I’m quite impressed. I know Dior does shows sometimes at Versailles. I guess this is our version, a smaller version,” the English actress mused of the house.

Lady Henrietta Spencer-Churchill, who grew up at Blenheim as a daughter of the 11th Duke of Marlborough, wasn’t yet born when the two Fifties shows took place. Of Dior’s return to the palace, she said: “It’s fantastic — we were hoping they would come back.”

Svetlana Lloyd, who walked Dior’s Blenheim show in 1958, noted that itinerant shows are nothing new. As a house model, she traveled with Dior to Australia and New York in the Fifties. What has changed, dramatically, is the duration of the shows. In her days, they would last up to two hours.

Spencer-Churchill’s aunt, Lady Rosemary Muir, attended the 1958 show and admitted Tuesday’s outing was worlds away. “It was very interesting but far from the elegance of the Fifties. The 1958 show was so glamorous and all of the guests were beautifully dressed and coiffed. And the music was romantic,” she said, raising an eyebrow at the “gym shoes and bare legs” in the front row.

Muir is the last surviving member of her generation of the Spencer-Churchill family and is working with the Blenheim archivist on preserving the history of the palace. “I’m the only one who remembers living in the house before and after the war,” she said.

Blenheim, the only non-royal, non-church country home in England that is known as a palace, has played a key role in history. The land on which it was built was given by Queen Anne to John Churchill, the first Duke of Marlborough, in the 18th century after he conquered the French in the battle of Blenheim in 1704 during the War of Spanish Succession.

It was the birthplace of Sir Winston Churchill and a refuge for the famous statesman during his life. (He painted his watercolors there and proposed to his wife Clementine on the grounds at the Temple of Diana summer house.)

During World War I, the house served as a convalescence hospital for soldiers. Blenheim Park was used by Britain’s Home Guard for training during World War II and its lake for preparation for the D-Day landings. It was later used by MI5.

Today, it’s a UNESCO World Heritage Site and the Blenheim Art Foundation was also home to the largest-ever exhibition of Ai Weiwei’s artwork in the U.K.

The art connection was in full flow on Tuesday, with models carrying Dior handbags designed by the British artist Marc Quinn. Some were done in printed leather, while others were made from embossed aluminum.

The bright flower designs on the bags and accessories were inspired by various paintings while others were based on Quinn’s work “We Share Our Chemistry With the Stars.” Before the show, Quinn said for this first fashion collaboration, he wanted to create a collection that celebrated “love, and the more joyful things in life,” and sees the bags and accessories as “portable artwork.”

Handbags have always played a crucial role in the life of the house.

The Dior ceo noted that Bernadette Chirac, wife of then-president Jacques Chirac, offered Princess Diana her first Lady Dior bag, which she adopted with gusto, clasping its charm-festooned handles as she hugged children during hospital visits and toting them in a range of colors — which she had purchased herself — during a highly publicized visit to Argentina.

Her association with Dior reached a zenith in December 1996 when she attended the Costume Institute gala at the Metropolitan Museum of Art wearing Galliano’s first couture gown for Dior, accessorized with a matching navy Lady Dior.

Connections to the royal family persist, with Camilla, Duchess of Cornwall, wife of Prince Charles, touring Dior’s couture salons in 2013.

Christian Dior Couture ended 2015 with sales in excess of $2 billion, as reported, and a global boutique network counting 195 locations.

The cruise collection as a whole will get exposure in an upcoming Lady Dior campaign featuring Marion Cotillard, who has fronted ads for the bag since 2008.

“It’s no more the pure cruise concept,” he said, noting the collection spans a range of fabrics to suit various geographies. “It’s an opportunity to go to a place where Mr. Dior himself has been presenting,” Toledano said. “And London is so close. There are so many things happening here in fashion.”

The brand’s English invasion began Monday evening with a welcome dinner at the Lady Dior Pub in London’s Mayfair, decorating the bar with bunting and a special logo featuring an elegant woman in all her New Look splendor, raising a pint of beer with the initials CD carved on the glass.

Before the show, guests toured Dior’s palatial New Bond Street flagship, which opens to the public Friday. Later Tuesday evening they repaired to Loulou’s for a dinner and party, where guests streamed through the private club noshing on parmesan risotto; stopping by stations to have their portraits sketched; their profiles cut into black paper; or their fortunes told.

RELATED SLIDESHOW: Inside Dior After-Party at LouLou’s in London >>