As the ultimate symbol of the capital city’s emergence as a luxury market, Christian Dior has opened a three-story women’s wear boutique here. 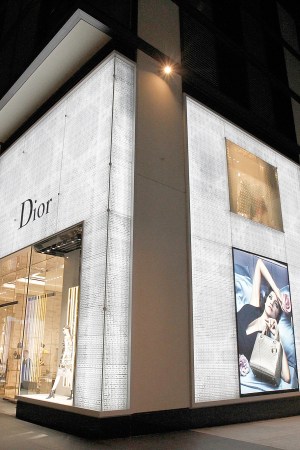 WASHINGTON – The Old Washington happily spends a cold Thursday evening engrossed in yet another presidential debate.

They were at the opening celebration of the new Dior boutique here, gushing over Versailles-inspired lace-up boots.

As the ultimate symbol of the capital city’s emergence as a luxury market, Christian Dior has opened a two-story women’s wear boutique at CityCenterDC, based on its flagship on the Avenue Montaigne.

With an interior modeled on Peter Marino’s other Dior retail spaces, and artwork designed by a constellation of chic artists, the shop is a “great place to hang out,” chirped one guest, at the boutique’s opening party Thursday night, for clients, new and old.

A Christopher Schanck bench welcomes you upon arrival, anchoring the handbags and accessories salon, creating the kind of haute/hip art gallery vibration, or what the company calls its “modern shopping environment.”

The younger crowd posed for selfies in front of the giant video art wall by Yoram, which projects a virtual garden of floral images. Others took a look at the third-floor VIP lounge, generally only open for “private appointments.”

Dior has closed its previous location in Chevy Chase, a Washington suburb, opening its larger and more lavish digs, right before Christmas, at CityCenterDC, in the heart of the city. “We call this the French Quarter,” explained Timothy Lowery, a senior manager of CityCenterDC, which now boasts Dior, Hermès and Louis Vuitton within feet of each other.

Retailers are banking on better foot traffic, city tourists and the boom of downtown dining, shopping and condos, to draw high-end consumers.

“When I was in high school, this area was a desert,” explained native Washingtonian Christian Zapatka, admiring a sequined gown with matching fur jacket. “It was terrifying. Now it’s the epicenter of the city. We no longer need to feel inferior.”

“Washington, D.C. is surrounded by five of the wealthiest counties in all of the U.S. and over the past 10 years, the combination of wealth in the area and reurbanization has made downtown D.C. one of the most attractive destinations for luxury outside of New York and Los Angeles,” said Pamela Baxter, president of Christian Dior Couture Inc., in an e-mail. “It is very important to focus on the local client while the Euro and Yen are weakened and tourist traffic is threatened. We feel there is still a very strong American luxury customer. D.C. attracts a sophisticated international client due to the many embassies in the area.”

Dior staff at the party couldn’t dish any gossip, however, on the short-list candidates to replace their creative director, Raf Simons, who surprisingly resigned his post in October.