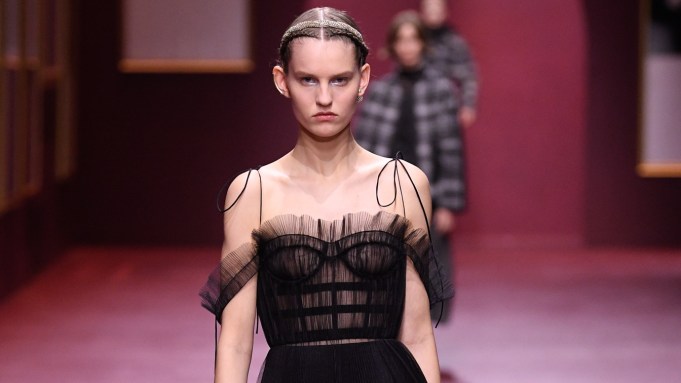 This is Dior’s year — at least as it relates to downloadable style images.

In a report released Tuesday by Launchmetrics, the French fashion brand amassed 13,681 downloads for the fall ’22 season. Nipping at its heels was Chanel with 11,920 downloads and Valentino with 10,425 unique downloads.

But don’t count the Americans out completely. When it comes to average number of downloads per image, Michael Kors led the pack with 37.7 downloads, above Bottega Veneta with 34.8, McQueen with 34.6, Chanel with 34 and Burberry with 32.6.

In total, Launchmetrics said, the women’s ready-to-wear shows in New York, London, Milan and Paris for the fall season drove a total of $588 million in media impact value, a proprietary algorithm created by Launchmetrics to measure and benchmark the impact of all media placements and mentions in fashion and beauty publications.

The figures were compiled by drilling down into the work of Launchmetrics Spotlight photographers who shot 649 shows around the world, or 73,000 images, for the fall season on the runway, backstage and on the streets. In total, these images were downloaded over 449,000 times by some 1,000 people representing more than 300 magazines across 52 countries.

After analyzing photos from the shows, Launchmetrics identified 16 distinct styles for the season including Y2K — the number-one trend — followed by Dopamine Dressing, Sensual Fluidity and Academia.

Bottega Veneta’s first look — jeans and a white tank — that reflected the Y2K trend was the most popular downloaded one with 156 unique publisher downloads. Valentino’s hot pink slouchy pantsuit, with 128 unique downloads, was seen by media as the top Dopamine Dressing look.

Among the fashion houses, the report said, the Boyish trend was explored the most, with 34 brands showcasing at least one or more of the gender-fluid garments that “integrate a pinch of ‘Top Gun Maverick’ ambiance with adolescent style,” the company said.

Minimalistic Icon, or structural and long silhouettes, and Cottage Core, defined by Launchmetrics as traditional styles inspired by the countryside, were the next most popular, showing up in 32 shows.

But not surprisingly, the trend of Sexy Body was the number-one tagged look of the season, even though it only showed up in 10 percent of the 1,904 total looks that walked down the runway and accounted for 11 percent of the total downloads. The cutout dress was the most tagged product category and other popular looks included transparent and mesh dresses and miniskirts. “The rise of athleisure, supercharged by COVID[-19]-led lockdown, has come to an end,” Launchmetrics said. “It is now time to celebrate the body with fitted shapes and sexy, revealing details.”

Broken down by city, it was the dark and Gothic-inspired Royal Core trend that was shown most often in London, while in Milan, Sexy Body looks were most popular. The Minimalistic Icon trend, such as those from Rick Owens and Ann Demeulemeester, was tops on the runways in New York and Paris.

The data research and insights company for fashion, luxury and beauty is projecting $100 million in annual recurring revenue by 2025. It’s on track to post revenues of more than $50 million in 2022, and is exploring an initial public offering “in the next few years.”