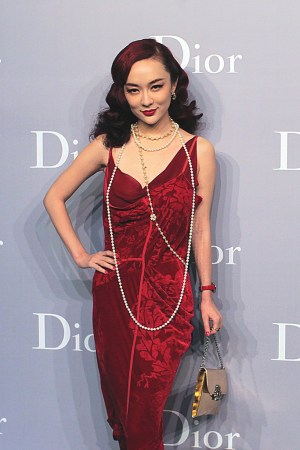 The French house feted its new 8,611-square-foot flagship in Beijing’s Shin Kong Place on Thursday with a healthy turnout for a ribbon-cutting featuring Chinese actors Maggie Cheung, Huo Siyan and Huang Xiaoming, as well as LVMH Moët Hennessy Louis Vuitton chairman Bernard Arnault. Hundreds attended a lavish dinner inside a giant tent created for the occasion; dozens of tables were set with candelabra, pussy willows, and white and pink roses. Guests also took in a runway show of the spring collection.

This story first appeared in the December 19, 2011 issue of WWD. Subscribe Today.

“There’s an energy here that reminds me of New York in the Seventies,” said Dior president and chief executive officer Sidney Toledano. Chinese customers are “excited, positive. You can project from here.”

Toledano declined all comment on the company’s search for a head couturier since last March when Dior fired John Galliano. Most recently, WWD reported that Dior is closing in on a deal with Jil Sander’s Raf Simons.

The grand opening of the Beijing store coincided with the opening of an exhibition called “Lady Dior As Seen By,” a one-month display of artwork based on the iconic quilted handbag.

The show, on display in an enclosed area created at the Huamao Plaza outside Shin Kong Place, is a collection of nearly 60 photographs, sculptures, and multimedia works based on the history of the Lady Dior handbag collection. The collection was launched in 1995, when Bernadette Chirac, the wife of then-president Jacques Chirac, gave a Dior purse to Princess Diana. She subsequently ordered multiple versions of the bag.

A four-way film room was in the center of the exhibit, projecting Marion Cotillard’s turn in a series of promotional short films for the bag.

True to Christian Dior’s background as an art gallery owner who was said to be the first to display works by Alexander Calder, Salvador Dali, Joan Miro, and Alberto Giacometti, the Beijing store features a series of specially commissioned artworks.