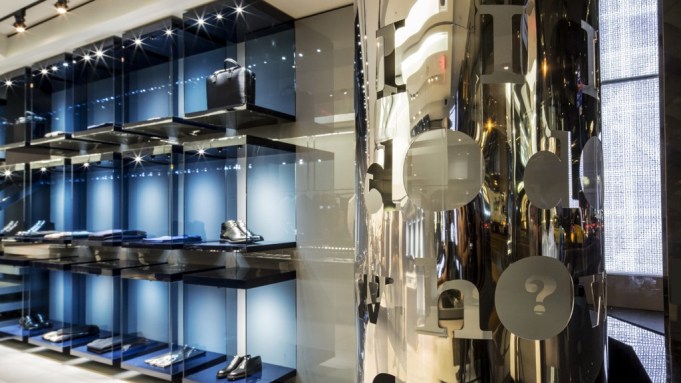 Dior Homme is extending a strategy of installing site-specific artworks in key retail stores to elevate the brand, create engaging selling spaces and tailor each boutique to the local geography. On Tuesday, the luxury brand installed a text-based work by Matt Keegan in the windows of its 57th Street flagship in New York and a sculpture by Aaron Curry in the Beverly Hills store on North Rodeo Drive.

Both artists were selected by Dior Homme creative director Kris Van Assche and given carte blanche to create custom works for the respective retail units. “It is always interesting to meet new artists and build new collaborations. It is one of the great pleasures in our approach to Dior Homme,” said Van Assche. “Each collaboration is unique, and in this way the global identity of the stores is given a further, personal layer that is tied to a sense of place.”

The 57th Street work by New York-based Keegan is an eight-and-a-half-foot sheet of curled steel, with the phrase “How Do I Look?” repeatedly punched out of it. The artist is known for manipulating stock phrases where “the meaning has been almost completely wrung out of it,” as he puts it, and recontextualizing the possible interpretations. “I had the phrase ‘How Do I Look?’ in mind as I had made collages of someone getting dressed in front of a mirror about seven years ago,” said Keegan. “It was a perfect question, a familiar phrase that becomes a play on a question asked in the retail space and also about the work of art itself.”

Due to the mirrored, reflective surface of the sculpture, the artwork will shift and mutate as people walk by it on the street. “This interaction will be the most dynamic part of the sculpture; it is made for that footfall,” observed Keegan. “I am happy there is something odd enough to it that it takes in that cacophonous street.”

In contrast, Los Angeles-based Curry’s 17-foot-tall abstract sculpture is oriented towards that city’s car culture. The creation can be viewed from a distance as well as up close to the shop window. Fashioned from cardboard and plastered with photo prints of the artist’s own skin and hair, the totemic sculpture, primitive and cubist in form, is topped with a head of sorts protruding through a box.

“It is dealing with people dealing with their own bodies and thinking about covering their skin, the way that people obsesses about their own bodies before getting dressed,” explained Curry of the work, which is at once playful and unsettling. “It seemed particularly appropriate for L.A.”

Curry is known for working with vivid color but stuck to mostly black and white for this work — a nod to Dior Homme’s affinity for muted tones.

The new, permanent artworks, which are owned by Dior Homme, join existing pieces installed in the company’s Miami, San Francisco and SoHo stores. The latter unit in downtown New York showcases a text-based sculpture by post-situationist artist Robert Montgomery, which reads “Whenever you see the sun reflected in the window of a building it is an angel.”

In Miami, Dior Homme commissioned Bruce Weber to create a film, titled “Can I Make the Music Fly,” which is shown on a continuous loop on a series of stacked plasma video screens. The film features ballet dancer Sergei Polunin, pianist Mason Buccheri and violinists Charlie Siem and Claudius Agrippa.

The San Francisco store is adorned with a wall mural by local artist Hannah Stouffer.