The brand has opened its third freestanding store in the U.S., at 216 Stockton Street in San Francisco’s Union Square. 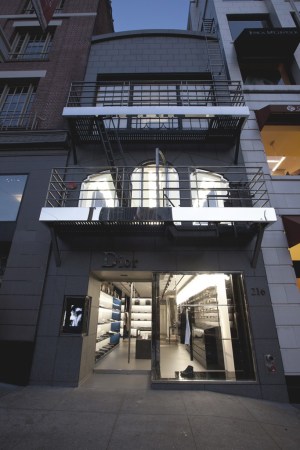 Dior Homme has opened its third freestanding store in the U.S., in San Francisco’s Union Square. Located at 216 Stockton Street, the 2,200-square-foot space on two levels was previously a women’s Christian Dior store that has been renovated and transformed into a men’s store.

“The configuration was too small for the new women’s concept we are doing now. But it’s a perfect location and layout for a men’s store,” said Pamela Baxter, president and chief executive officer of Christian Dior Inc. and president and ceo of LVMH Perfumes and Cosmetics North America.

The company, a unit of Paris-based LVMH Moët Hennessy Louis Vuitton, is looking for a larger location for a women’s Christian Dior store in San Francisco.

“We’ve always thought San Francisco was a good opportunity for men’s,” said Baxter. “This is a city where there are men who dress up and [there are] social occasions to do so. We started discussions a couple of years ago about opening Dior Homme here.”

The San Francisco store joins existing freestanding Dior Homme stores in New York and Beverly Hills. There are also Dior Homme units within, or connected to, larger Christian Dior women’s stores at the Ala Moana Center in Hawaii, and Las Vegas units in the Wynn hotel, the CityCenter complex and The Forum Shops at Caesar’s Palace.

The new dual-level San Francisco store showcases sportswear, casual footwear and accessories on the ground level and tailored clothing and dress furnishings on the second floor. A third floor is reserved for a stock room and offices.

Designed by an in-house architectural team based in Paris, the store is decorated in Dior Homme’s signature grays and blacks, with mirrored surfaces and lacquered steel fixtures accentuating the stark, modern aesthetic of the brand. The floors are in gray porcelain tile and a glass and steel staircase connects the two floors. A mural by San Francisco-based artist Hannah Stouffer adorns the second floor staircase landing, depicting an abstracted forest and wildlife scene, giving the store a uniquely San Francisco personality, said Baxter.

The exterior of the building was left untouched, due to its landmark status, but the interior of the store was made more visible from the street. A 22-inch video screen plays Dior Homme fashion shows and montages in a vitrine to the left of the entrance.

Nearby stores include Neiman Marcus, Gucci, Prada, Hermès and Chanel.

In addition to its own boutiques, Dior Homme is wholesaled at Saks Fifth Avenue and Barneys New York, as well as four specialty accounts in North America: Maxfield, Atelier, Riccardi and Leone. Total sales in 2011 for Dior Homme will be up in the high double digits, driven by increases in tailored clothing, said Baxter.

However, men’s remains less than 15 percent of the total Christian Dior business in the U.S., due to its very limited distribution.

Dior Homme is currently looking for real estate to house a freestanding store in Las Vegas. A temporary Dior Homme store is slated to open in the fall in Miami’s design district at 150 NE 40th Street, with a permanent location planned for 2014 at 161 NE 40th Street.