Dior Is Launching a Scooter With Vespa

The limited-edition Vespa 946 Christian Dior and matching accessories, including a helmet, will go on sale in spring 2021.

LA DOLCE VITA: Dior has linked with Italian brand Vespa to create an exclusive scooter and a range of matching accessories.

In the works since before the coronavirus pandemic put the world in lockdown, the collaboration is rooted in the “spirit of freedom, movement and expression,” the companies said in a joint statement.

Maria Grazia Chiuri, creative director of Dior women’s collections, designed the limited-edition version of the Vespa 946, a modernized version of the scooter that was originally presented by manufacturer Piaggio in 2012.

“For me, Vespa is linked to my city, Rome,” she said, evoking the image of Audrey Hepburn riding on the back of Gregory Peck’s scooter in the 1953 movie “Roman Holiday.”

“I have so many happy memories starring a Vespa. It’s how my husband and I used to get around Rome and go to the seaside in Fregene. It’s a symbol of Italian-ness that is intricately linked to my personal history, and it’s now part of my professional life at Dior,” Chiuri said.

Pietro Beccari, chairman and chief executive officer of Christian Dior Couture, noted the house’s founder Christian Dior was fascinated with the Italian Riviera in the Fifties.

“The Dolce Vita lifestyle never ceased to infuse its elegant spirit into his haute couture models, a sun-drenched magic that today, more than ever, is perpetuated in the collections of Maria Grazia Chiuri,” he said.

Dior was due to underscore its ties with Italian culture with the planned presentation of its cruise collection in Lecce on May 9, but it was forced to cancel the show due to the COVID-19 pandemic. 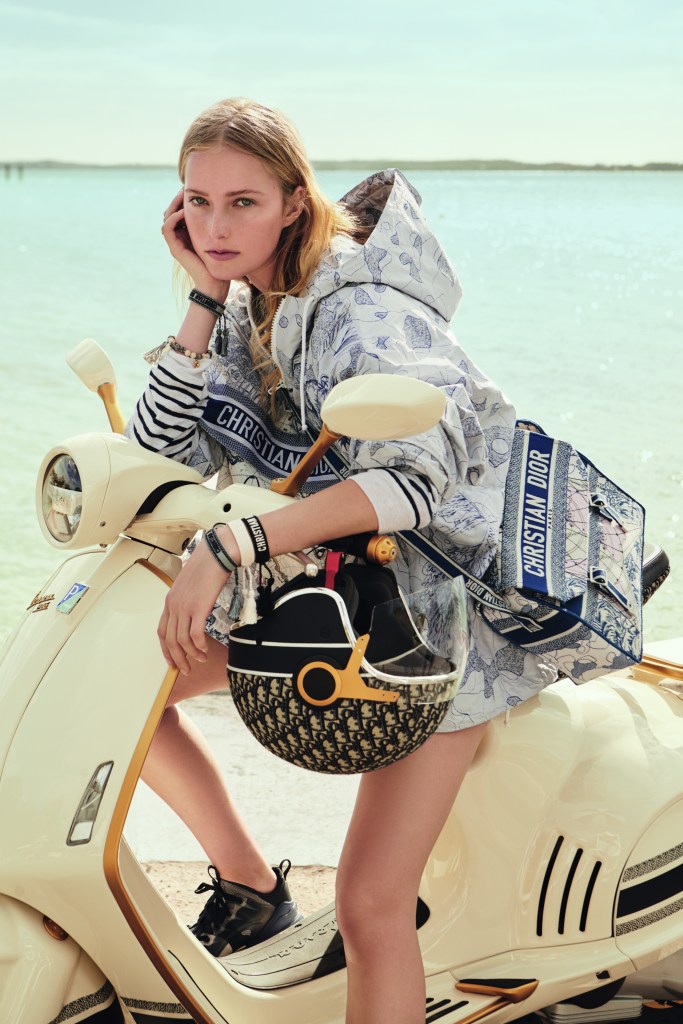 The Vespa 946 Christian Dior, featuring a saddle patterned with the Dior Oblique motif, will go on sale in spring 2021 in Dior boutiques around the world and subsequently in a selection of Piaggio’s Motoplex stores. Accessories, including a matching helmet and top case designed to be fixed on the luggage rack, will be available exclusively in Dior boutiques.

Michele Colaninno, ceo of holding company Immsi Group and Piaggio’s chief of product and strategy, noted the scooter was a symbol of escape to new horizons.

“In these unprecedented times, it is great to be able to dream of a better future. The house of Dior opened its doors in 1946 in Paris, the same year that Vespa made its debut in Italy. This new Vespa 946 celebrates that anniversary and honors our heritage,” he said.

“Today, like yesterday, we have gone through a dark period and now we are joining forces to share some joie de vivre through a combination of style and craftsmanship,” Colaninno concluded.