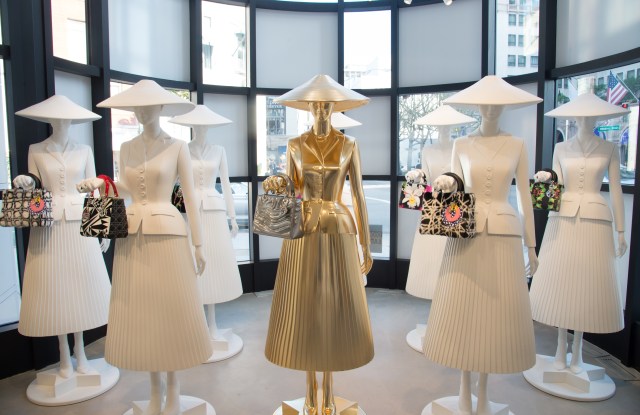 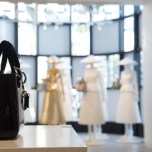 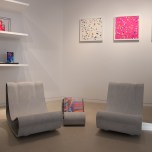 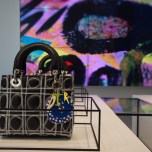 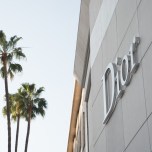 LOS ANGELES — Dior has planted a new temporary flag on the West Coast with the opening of its only pop-up boutique dedicated to the Dior Lady Art collaboration, at 201 North Rodeo Drive in Beverly Hills. Situated at the corner of Wilshire Boulevard, one block south of Dior’s permanent Rodeo Drive store and in the same building that once housed Bulgari’s flagship and Louis Vuitton’s temporary digs, the first-floor space makes good use of the building’s massive limestone facade and four-story glass tower as branding billboards.

Inside, the pop-up store references its Los Angeles setting with a gold Walk of Fame-style star — the symbol also being a favorite of the late Christian Dior — and a gold mannequin that mimics an Oscar statuette, albeit as a female sculpture dressed in a New Look ensemble. Each of the seven designers has an installation showcasing the full range of product including two sizes of handbags, small leather accessories, scarves and bijoux. The main wall features an oversized digital screen offering the full-on visual experience of each artists’ work.

Only 700 bags will be sold among six locations worldwide. In addition to the pop-up, which is the sole North American retail outlet, the collection is available in Dior’s London and Paris boutiques, and will launch in Dubai on Thursday, followed by China and Korea on Dec. 10. The Beverly Hills pop-up is slated to remain open until February.

Dior has a long history with the City of Angels. The late designer once staged a runway show at the Beverly Hilton Hotel in 1957, and the label was a favorite of Grace Kelly. Today its ambassadors and campaign faces include Academy Award-winners Charlize Theron, Marion Cotillard, Jennifer Lawrence and Natalie Portman. The opening night cocktail party featured a crop of starlets including Haley Bennett, Britt Robertson, Zoey Deutch, Jaime King, Ahna O’Reilly, Halston Sage, Odeya Rush, Zosia Mamet, Olivia Holt and Brianne Howey.