Christian Dior is splashing its famous name over two glossy initiatives this fall and winter.

By Miles Socha and Joelle Diderich on September 6, 2012
View Slideshow 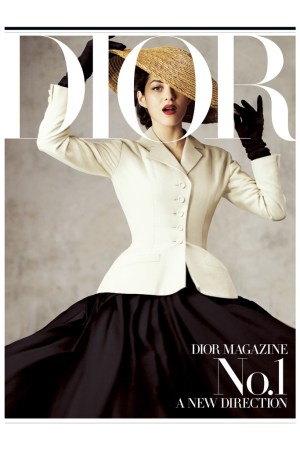 PARIS — Christian Dior is splashing its famous name over two glossy initiatives this fall and winter: its own print magazine, and a holiday project with Printemps’ Boulevard Haussmann flagship.

Disclosing details of the two projects, Dior chief executive officer Sidney Toledano said such communication efforts nourish the brand, feed its narrative and help articulate “the values of Dior, which are different from our competitors.…It’s important today to differentiate ourselves.”

Entitled Dior, the seasonal magazine is to be published each September and March in nine languages with a controlled circulation to Dior’s best customers and prospects. Toledano declined to quantify the number of copies the company is printing but said French and English versions would be released first, around Sept. 10.

Patrick Demarchelier, Jean-Baptiste Mondino, Paolo Roversi and Willy Vanderperre are among the high-profile photographers with credits in the issue, whose content is overseen by Dior’s in-house communications team. Features include an interview with Dior’s new couturier, Raf Simons, by editor Jo-Ann Furniss, with articles and photo spreads dedicated to men’s wear, fine jewelry, perfume and accessories.

“It’s another way to communicate luxury,” said Toledano, flipping through the heavy, velvety pages and stressing, “This is not a catalogue. It’s fresh and modern. It’s how we see ourselves; our own maison. I think it translates perfectly the mood of the company right now.”

The print issue follows the February introduction of online editorial at Diormag.com, which has already attracted some 2.6 million visitors, the company said.

Meanwhile, the Christmas partnership with Printemps extends from the building’s facade — with special illuminations and windows — to unique products and holiday shopping bags.

The initiative runs from November to January, starting with mechanical windows whose dolls will be dressed in exact replicas of iconic Dior outfits, realized by its couture ateliers.

Toledano said the Printemps partnership speaks to the house’s “excellent relationship” with European department stores like Printemps, Galeries Lafayette and Le Bon Marché in Paris, Harrods in London and La Rinascente in Milan, which in recent years embarked on upscaling drives to attract luxury consumers. “Everyone understood the future was to embrace and bring in the best brands,” he said.

“We really believe Printemps is more than selling products — it’s about creating an experience, and we’re looking for brands that can help us create magic in our store,” said Printemps chairman and ceo, Paolo de Cesare. “We wanted to use the incredible beauty of Paris to create a global dream for Christmas, and when you talk about Paris, there are a few brands that exemplify the elegance, the luxury, the savoir faire and the fashion of Paris, and clearly Dior is one of the best.

“Paris is the capital of fashion. We are blessed to have as neighbors the best brands of fashion and luxury in the world, and we need to make the best of this,” he added.

“Despite all the crisis and things that you hear, we are seeing an increase in traffic in the store,” de Cesare said, noting the store has posted double-digit sales growth at Christmas the past three years.

“Luxury continues to be an absolute winner, and it’s accessories, watches and jewelry and shoes,” he said. “This has been a trend for a couple of years and we believe it will continue. What we have been seeing the last couple of months, and I think it will be the very good surprise for Christmas, is a new interest in fashion.”

He said this was due to three factors: the renovation of Printemps, Asian demand and a creative renewal at key brands.

Printemps has previously invited Chanel and Lanvin to help create its Christmas displays.