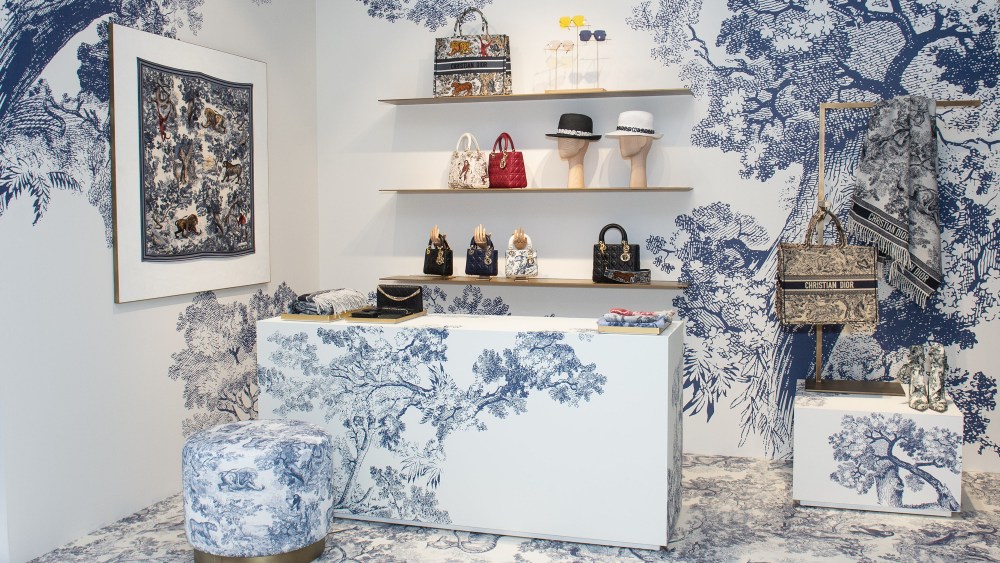 PARIS — Dior’s latest push into the U.S. market spans the online world and the physical one — the latter complete with a menagerie of toy animals that look as if they might stampede into the French brand’s eclectic new pop-up in Manhattan.

The temporary store opened on Monday in the city’s Meatpacking District, offering a complete selection of the French fashion house’s offer for women, men and children.

The pop-up coincides with the arrival of Dior’s U.S. e-commerce site, which is launching on Nov. 28 with a capsule collection designed by men’s creative director Kim Jones in collaboration with U.S. artist Kaws, and will be expanded in February to all other categories.

“New York is very important for us. In the U.S., Dior is strong, but I think that we need further awareness,” said Pietro Beccari, chief executive officer of Dior. “I believe that this idea of the Meatpacking [District pop-up] is coming at the right time.”

Expected to operate for four months, the pop-up is divided into rooms featuring products that will rotate as new merchandise comes on stream. Beccari compared the space to the Marché aux Puces in Paris, which gathers antique dealers offering everything from vintage clothes to Art Deco furniture under one roof.

“It’s like a cabinet of curiosities, because basically you can go from store to store being in the same environment,” he told WWD. “Each ambience is different and you can just use it in a very flexible way. I think it’s pretty unique as a system. Nobody has done a pop-up containing several pop-ups.”

The unit is located at 400 West 14th Street in a space previously home to the Gaslight lounge and pizzeria that sits a stone’s throw from Soho House New York and across the road from an Apple store.

A menagerie of animals, covered in Dior’s new signature toile de Jouy print, stands sentry outside the store, including a shy giraffe, sly monkey and sheepish tiger. Inside, visitors come face-to-face with an elephant the size of a compact car and the largest beast in Dior’s jungle.

The front of the pop-up features Chiuri’s cruise collection, which provided the inspiration for the toile de Jouy theme that Dior is rolling out worldwide for its holiday window displays. Come January, the central space will house Jones’ debut men’s collection.

“Everything will have its own separate box, so we are not mixing categories, we are just allowing people to go in and go out, and explore the environment and discover,” said Beccari. “It doesn’t really mark a change in strategy. You have couples going to shop, and these boxes allow everyone to find his joy.”

Prices greatly vary and include a $55 notebook or $15,300 for a women’s Grand Bal watch, both featuring the toile de Jouy pattern, a legacy of decorator Victor Grandpierre, who helped to define founder Christian Dior’s identifying codes, including 18th-century references like the house’s signature Louis XVI chair.

A variation on the pattern, rendered in Dior’s signature pink and dove gray, was also featured in the men’s collection shown in Paris in June. Beccari hopes the label’s customers will adopt it as a new signature alongside the Oblique monogram.

“Of course, toile de Jouy, when you hear the story and when you hear the love that Mr. Dior had for that particular signature, is part of our iconic language,” he said. “All the ingredients are in place for making it current again, but at the end of the day, the market will decide whether there is an appetite for it or not. We hope so.”

Chiuri’s toile at first looks like the typical single-color print of a pastoral scene, but the designer takes liberties with a multicolored version featuring green trees and red snakes hanging over the animals. The breadth of the designer’s toile de Jouy adventure can be seen in the collection room of the pop-up.

Its walls are covered in a blue toile pattern, blown up to exaggerated size. The entire toile de Jouy story is displayed, including handbags, hats, blankets and ready-to-wear. The latter includes a white sweater with embroidered-over black toile design, retailing for $2,400, and a sleeveless dress in blue toile priced at $5,300.

Purchases during the store’s soft opening on Sunday ranged from Mitzah scarfs, priced at $200, that sold briskly to consumers who wanted a memento of Dior’s take on toile, to a black mesh chiffon dress with pom-poms with a price tag of $17,500. The dress has been the highest-priced item, but will be usurped by a double-face wool angora embroidered coat from the cruise collection for $19,000, when it arrives at the store.

The motif features heavily in Dior’s homewares assortment, merchandised at the pop-up next to a Christmas tree decorated with toile animal ornaments. Items include a set of six glass straws, retailing for $170; a blue cushion at $750, and a stuffed elephant costing $890.

“There is a whole 360-degree coordination around windows, around product, around everything that will celebrate Christmas,” said Beccari. “It’s about gifting — it’s about having fun, buying stuff for people you love and I think this toile de Jouy offers us a multifaceted possibility of developing this category.”

Another room, covered in the vintage Oblique logo pattern, allows customers to embroider their names on the Dior Book Tote, marking the first time the personalization service, named ABC Dior, is available in North America.

Used by celebrities including Rihanna, Chiara Ferragni and Jennifer Lawrence, the exclusive service is available in a handful of stores worldwide. It will be offered in the Meatpacking District pop-up exclusively for two weeks, then in the Dior boutique on 57th Street from Dec. 4 to 13.

Dior offered the option to personalize the bags, which require more than one-and-a-half million stitches to produce and retail for $3,050, at a pop-up in Harrods in London in August — and met with immediate success.

“Basically, 100 percent of the customers buying a Book Tote wanted to have his or her name on it, and so we have one problem with this bag, which is scarcity, because it’s very difficult to find, so as soon as we have some availability, we do events around personalization,” said Beccari.

“It’s complex. It requires a certain savoir-faire and you need people who are formed especially for that,” he explained. “Maybe one day, we’ll be able to do this personalization in all of our stores, but we are not there yet. But looking at the appetite and the desirability that these totes with names have, it’s probably something which we will look at.”

Come December, the pop-up will sell the capsule denim line designed with Kaws, whose signature BFF character appeared as a 33-foot-tall sculpture made of 70,000 flowers in Jones’ first show in Paris in June, and is also featured in his debut advertising campaign for the house.

This will be flanked by a Baby Dior capsule collection for boys aged from 4 to 12, consisting of seven items of clothing including sweatshirts, jeans and a reversible bomber jacket, alongside high-top trainers, a cap and a teddy bear.

The store also contains a small selection of watches and fine jewelry, with items from the Rose des Vents collection ranging in price from $1,500 to $2,000, and Chiuri’s first beachwear designs, a capsule line called Dioriviera that will roll out to 28 boutiques worldwide on Dec. 6.

All in all, Beccari is banking that the ambitious pop-up will cement awareness of Dior in North America. “It’s a very important market,” he said, declining to provide specific numbers for the region. “We are pretty happy with our figures,” he demurred.

The executive noted the Meatpacking District is attracting growing numbers of tourists with an influx of restaurants after Google earlier this year acquired the nearby Chelsea Market building for $2.4 billion, though for now, he has no plans for a permanent Dior presence in the location.

“I don’t think so, honestly, because we’re going to open Hudson Yards in a while, which is not far away. We have a store in SoHo, so I’m not sure about that — but never say never,” Beccari concluded.