Belgian designer to show his first collection for the house during Paris Couture Week in July. 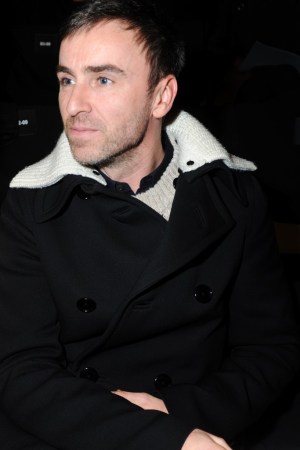 PARIS — The long search is finally over.

Christian Dior on Monday named Raf Simons its next couturier, and said he would unveil his first collection for the house during Paris Couture Week in July. His official title is artistic director of women’s haute couture, ready-to-wear and accessory collections.

The appointment marks the end of a long search process that has captivated the industry, and it confirms a report in WWD on Dec. 13 that the fabled French house was closing in on Simons as the successor to John Galliano, who was ousted in March 2011 following racist and anti-Semitic outbursts at a Paris café.

Simons is the second Belgian designer to arrive at Dior in recent years. Kris Van Assche has been at the helm of Dior Homme men’s wear since 2007.

Dior’s choice of Simons suggests the house is ready to nudge its fashions in a more modern direction — given his predilection for minimalism and futurism — and turn a page on the retro-tinged glamour Galliano plied over a stellar 15-year tenure.

The appointment is also sure to ignite a fresh rivalry between Dior and Yves Saint Laurent, which just named Hedi Slimane its creative director. Slimane was the designer of Dior Homme from 2000 to 2007.

It also ramps up competition in the modernist fashion arena, given that Celine’s Phoebe Philo is another key actor on the Paris stage pushing a minimalist agenda — even as the fall collections seemed to point to a return to embellishment.

Dior and Celine are brands controlled by luxury titan Bernard Arnault, who is chairman and chief executive officer of LVMH Moët Hennessy Louis Vuitton. YSL is part of PPR, controlled by the Pinault family.

In a statement released on Monday, Dior trumpeted Simons as “one of today’s greatest talents” who would “propel [Dior’s] iconic style into the 21st century.”

For his part, Simons called founder Christian Dior “the most inspiring couturier. Around the globe, the name Dior symbolizes the ultimate in elegance and refinement.

“It is with the utmost respect for its tremendous history, its unparalleled knowledge and craftsmanship that I am joining the magnificent house of Dior,” he added.

Dior said Simons was not immediately available for comment; however, he confirmed his arrival to Cathy Horyn at The New York Times, who has been a vocal champion of the 44-year-old designer, who was ousted as creative director of Jil Sander in February and succeeded by Jil Sander herself.

A self-trained men’s wear maverick, Simons made a name for himself in women’s wear only since joining Jil Sander in 2005, steering a brand known for purism and sleek tailoring into new territories. As if auditioning for a plum post in the French capital, his last three women’s collections at Jil Sander mined midcentury couture for inspiration, and elicited raves.

Galliano, who brought spectacular showmanship and epic, romantic inspirations to Dior, had in his last years at the house been devoted to more ladylike dressing, turning out collections inspired by the founder’s earlier work and focusing on iconic styles such as its “bar” jacket and grand eveningwear. Dior presented his first collection in 1947.

Simons emerged as a front-runner for the Dior job in November after talks with Marc Jacobs, creative director at sister company Louis Vuitton, failed to produce a deal, and after the house had considered a slew of designers both mature and talented. Those said to have been approached include Slimane, Lanvin’s Alber Elbaz and Balenciaga’s Nicolas Ghesquière, along with younger talents including Maxime Simoens, Jason Wu and Alexander Wang.

It is understood the scope of the Dior job — limited to the women’s universe, and with a grandiose boutique design by American architect Peter Marino that is considered to be off-limits to alteration — proved a hindrance to attracting certain candidates, while others were constrained by ownership stakes or iron-tight contracts at their current houses.

According to sources, discussions with Simons reached a boiling point around Christmas, and then cooled off suddenly as Dior pursued talks with Simoens, a French wunderkind whose career story has uncanny echoes of Saint Laurent’s, who famously succeeded Dior at age 21. Simoens also shares a physical resemblance — a reed-thin physique and prominent eyeglasses — to Saint Laurent.

Simoens has repeatedly denied to WWD he had any contact with Dior. He recently wrapped up a one-season stint as creative director at Leonard.

One source on Monday suggested Slimane’s appointment at YSL might have compelled Dior to reconsider hiring a minimalist master of its own.

Simons’ appointment at Dior is likely to shunt aside Bill Gaytten, a key deputy of Galliano who helmed Dior’s design studio in the wake of Galliano’s ouster, earning some praise for recent collections faithful to Dior’s Fifties-flavored elegance.

Gaytten’s name was not mentioned in Monday’s announcement. He had previously been named creative director at the John Galliano fashion house, which is majority-owned by Dior.

Despite the public relations crisis surrounding the Galliano scandal, Dior has continued its strong business trajectory. Sales in its own boutiques rose 28 percent in 2011, reflecting strength across ready-to-wear, leather goods and watches. Operating profits more than doubled last year to 85 million euros, or $118.4 million.

Simons is sure to bring a jolt of excitement to Dior and to Paris fashion weeks. The September shows should be especially electrifying since that is when Slimane is expected to unveil his full vision for women’s and men’s at YSL, and Philo should be back on the runway after downscaling her March presentation due to expecting her third child.

Simons is expected to continue showing his signature men’s wear collection in Paris, and maintain ownership of his own fashion house. Dior, for example, does not have any equity stake in Van Assche’s company.

There was no mention of Simons’ label in Monday’s brief announcement.

Simons has been on the radar of LVMH, sister company of Dior, for some time. When Michael Kors wrapped up his stint as the designer of LVMH’s Celine brand in 2004, Simons was among the candidates that Arnault’s advisers touted.

In recent years, Simons’ fashion star has continued to rise given a string of hit women’s shows for Jil Sander. His spring 2012 collection reimagined ideas from the Fifties into hyper-chic fashions for today, including a finale of wedding dresses with a Grace Kelly allure.

His fall swan song at Jil Sander won a standing ovation, opening with a series of roomy coats in makeup shades that the models clutched at their throats, and climaxing with prim cocktail dresses licked with Latex.

According to sources, Simons had also been approached by YSL as it quietly sought a successor to Stefano Pilati, an Italian designer who wound up a turbulent-if-fruitful eight-year tenure last month. It is understood Simons had sometimes prickly relations with Jil Sander’s Japanese owner, Onward Holdings Co. Ltd., and his job-hunting only exacerbated the situation.

Born in remote Neerpelt, Belgium, Simons moved to Genk and obtained a degree in industrial and furniture design in 1991. Drawn to the energy of the Antwerp Six, who put Belgium on the international fashion map, he segued from furniture into fashion and launched a youth-oriented, street-inspired collection of men’s wear in 1995.

He started showing it in Paris two years later, and quickly caused a sensation with his skinny tailoring, street casting and such imposing runway venues as La Grande Arche de la Défense.

A designer with an intellectual bent, Simons is also an enthusiastic fan of contemporary art — echoing Christian Dior’s earlier background as an art dealer. For his fall 2007 signature show, he had a revolving sculpture by English artist Conrad Shawcross in the middle of his runway. His men’s collections have referenced artists including Christopher Wool and Robert Ryman, and his spring women’s collection for Jil Sander included sweaters decorated with artwork by Pablo Picasso.

Simons is often present at the Prada show, and has also attracted other designers to his front row, including Riccardo Tisci, Givenchy’s couturier — also considered a contender for the Dior position.

At Jil Sander, Simons elaborated on the German brand’s aesthetic, adding dresses and eveningwear to its signature tailoring. “I knew in the long run I couldn’t only think about minimalism and purism,” he told WWD in a 2008 interview.

For his spring 2011 collection, he invoked the grandeur of couture and the extravagant style of Elisabeth of Bavaria, the iconic royal, a riposte to other designers who had muscled in on minimalism. “It almost challenged me to the opposite, to do the idea of maximalism,” he told WWD at the time.

Last year, Simons was an honoree at Fashion Group International’s Night of the Stars in New York.