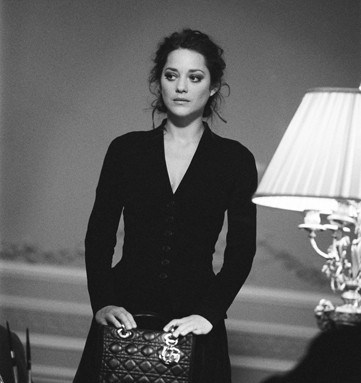 PARIS — Marion Cotillard plays the femme fatale to the hilt in “The Lady Noire Affair,” a mini movie making its debut May 20 on the Internet as Christian Dior puts more star power behind its brand and, the French firm hopes, more content into fashion advertising.

The six-and-a-half-minute thriller, which reunites the Oscar-winning actress with “La Vie en Rose” director Olivier Dahan, bristles with Hitchcockian tension as Cotillard totes her Lady Dior handbag, and its contents, to the summit of the Eiffel Tower amid swelling music and trailing a gaggle of gangsters.

“We’re creating a story. This is something new, and the Internet is a fantastic tool of communication,” said Sidney Toledano, Dior’s chief executive officer. The executive declined to disclose the budget, but characterized its making as that of a “real movie,” with the lengthy roll of credits — from electricians to gaffers — attesting to that.

While the Lady Dior, the firm’s number-one selling bag, is the focus of attention in “Lady Noire,” couturier John Galliano created Cotillard’s costumes — and she will also feature in print ads in lieu of a traditional, seasonal fashion campaign, whose formula Toledano finds wanting.

“Now we have to give more meaning,” he said. “People are looking for iconic products and they want to see a product representing the values of a company.”

Galliano said his role is to “make women dream” with luxury and style — and cinema is just the vehicle to explain the Dior muse. “We wanted to capture the glamour, the intrigue, the heroine and the mysterious allure that radiates around her,” the designer said. “Marion has brought the Dior woman to life. She is incredible.”

Print ads with Cotillard shot by Peter Lindbergh for the Lady Dior started running last November, further goosing sales. Despite a recessionary environment, sales of the bag advanced by double-digit rates in the fourth quarter of 2008 and the first three months of this year, Toledano said.

Images from a new Cotillard print campaign for fall-winter, themed “Lady Rouge” and to be shot in New York, are slated to break in August and September titles, and another film chapter is foreshadowed at the end of Dahan’s mini movie when Cotillard, almost unrecognizable, suddenly appears as a blonde in a lacy gown.

Dior declined to pinpoint the potential audience for “The Lady Noire Affaire,” which will appear at ladydior.com, but said its principal Web site, dior.com, logs more than a million visitors a month.

Dahan, who has done commercial work for Cartier and L’Oréal, said Dior’s brief was to create what looks like the climax of a long feature film, with Cotillard emoting intrigue and inner turmoil between brief scenes of a kidnapped man struggling to loosen his ropes, a mysterious package and cryptic phone calls.

Dahan is editing his first English language feature, “My Own Love Song” starring Renée Zellweger and Forest Whitaker, for release later this year. He said he’s also working on a screen adaptation of R.J. Ellory’s novel “A Quiet Belief in Angels.”

Galliano had his own take on the mystery of what women carry in their handbags. “It is part of their charm, their secret weapon,” he said. “Who knows what’s in there — keys, wallet, phone. That is all to be expected. Who’s to say what door that spare key opens; why she has her passport tucked in when she’s only going up the road and whose phone number she has scrawled on the back of an envelope….I love the unknown — and the what might be.”