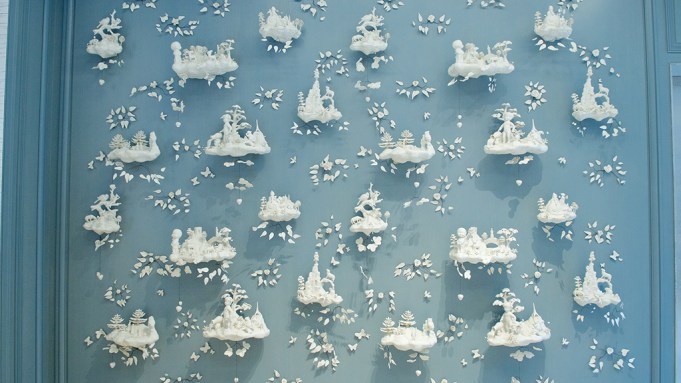 LONDON — Dior is answering its London calling in grandiose fashion this week, staging its resort show at Blenheim Palace and unveiling a silvery flagship on New Bond Street loaded with exclusive attractions.

The four-level unit, which opens to the public Friday, is billed as the French firm’s largest in Europe, boasting London’s first freestanding Dior Homme boutique, a vast home department loaded with bespoke products — plus four lavish VIP rooms, including one in the children’s wear department.

The latter feature signals that Dior intends to cater to local and international high-rollers, including the 350 top clients invited to the cruise display, 200 of them U.K. residents.

“We see growth in the U.K. market — and energy,” said Sidney Toledano, chief executive officer of Dior, ranking the U.K. among the brand’s five biggest markets.

Indeed, the executive said London is poised to welcome more well-heeled tourists, many of whom are bypassing Paris — still reeling from November’s terrorist attacks and now gripped with labor unrest — in favor of the vibrant English capital.

The sprawling New Bond Street flagship telegraphs Dior’s confidence in the market —- and underscores how today’s most powerful luxury brands are widening their lifestyle offering and ramping up elite services.

For example, one of the VIP rooms is fully equipped and furnished to host private lunches, while the entire fourth floor can be privatized.

“We call it the house of Dior,” said Toledano, noting the concept would be exported to Tokyo next year, where it will open such a unit in Ginza. “The whole universe is there.”

The London boutique, located at 160-162 New Bond Street directly opposite sister brand Louis Vuitton, was more than two years in the making. Dior opened temporary stores on Conduit Street and Mount Street when it closed its original New Bond location in February 2014 to annex a second building next door for the expansion. (The Conduit Street location has already gone dark while Mount Street will shutter in a month.)

Dior was obliged to maintain the original landmark facades, but gutted and rebuilt everything behind, except a farmhouse, also listed, which makes a quaint setting for the brand’s children’s wear and home departments.

Toledano noted that Dior has never exported its home universe, overseen at the Avenue Montaigne flagship by Doris Brynner.

For the sprawling London home department, showcased under a glass-roofed courtyard scented with the jasmine crawling up the trellis-clad walls of the farmhouse, Dior commissioned French creative and interior design consultant Isabelle Dubern to assemble a collection specifically for London that will later be rolled out to other top flagships, including the recently opened Seoul maison.

“This universe is totally new, unique,” Toledano said of the home department, showing off photos of vessels by Giberto Arrivabene and ashtrays by Jérôme Faillant-Dumas, perhaps best known in fashion circles for his fragrance flacons. “We know in London there’s a big potential for this. There are so many fine homes, and people invest in interiors. There’s a big demand.”

Other products unique to the location include limited-edition Lady Dior bags interpreted by sculptor Marc Quinn, one of Britain’s splashiest contemporary artists who once cast his bust in his own frozen blood and depicted Kate Moss in an elastic yoga pose.

His versions of the handbag come decorated with psychedelic orchids, a closeup of an iris and pupil, or a fossilized flower in relief. Prices range from 250 pounds, or $365 at current exchange, for a business-card holder to 5,000 pounds, or $7,300, for a large deerskin bag.

Etched glass columns are a wink to London’s grand old luxury hotels, which Marino remembers from visits as a child. They feature in the handbag and shoe salons, the latter appointed with a wall sculpture by Rado Kirov that resembles dripping mercury.

The architect completely reconfigured every single floor of the twin buildings, mapping out a series of generously sized rooms, each appointed with original artworks and custom furnishings.

“We want the customers to feel comfortable — and glamorous,” said Marino, who juxtaposed 18th-century features like Versailles parquet and intricate grillwork on the stairwell with “unbelievably modern things,” like the HD video montages that flash in the stairwell, or a Barberini & Gunnell bench that looks like it came off some spaceship.

Fashion illustrations by Christian Bérard are among decorative elements that nod to Dior’s history, while sleek touches include sculptures by Tony Cragg and Erwin Wurm and a gleaming off-kilter chandelier by Lee Bul. The latter punctuates the soaring atrium at the heart of the New Bond Street boutique, framed by yet more glass columns and funneling customers to various departments.

Dior Homme designer Kris Van Assche created a range of leather goods and a hooded nappa bomber embellished with graphic lines that wink to the Union Jack, all exclusive to London.

While Dior declined to give first-year sales projections, or even pinpoint the retail selling space, each department is given lavish space, including the salon for fine jewelry designed by Victoire de Castellane, and Baby Dior, overseen by her cousin Cordelia de Castellane and offering miniature versions of the Lady Dior and a pink mink cape priced at 6,000 pounds, or $8,760.

Toledano said he can envision entire families descending on the shop, some perhaps fixing appointments to peruse couture options for mother and children. Dior bills itself as one of the only French purveyors of hand-made clothes for kids, which are realized in an atelier in Redon, France. Christening gowns, the lace intricately hand-crimped with a small curling iron, take about a week to complete.

Toledano said ensuring the highest levels of service was a priority he set for the London store and its 70 staffers, all extensively trained in the run-up to the opening. They must all be able to explain the savoir-faire and house lore, in addition to all product features. On Monday, they greeted select customers, relieving them of shopping bags and offering Champagne or cups of specially blended teas, on sale in the home department for 25 to 40 pounds, or $36.50 to $58.40, for a tin.

Dior is orchestrating a series of events this week for visiting press and clients with a distinctively English accent, carving hedges outside Scott’s restaurant into New Look silhouettes, opening a Lady Dior Pub for one night only, and painting a fleet of London taxis in its signature canework pattern.

On Wednesday, Marino will return to sign copies of a new Phaidon tome, “Peter Marino: Art Architecture,” which documents some of the more than 250 site-specific artworks he has commissioned over this career, many of them for Dior, like the circular gingko-leaf bench by Lalanna that stands at the entrance.

Dior has 195 stores worldwide. In London, Dior also operates a boutique on Sloane Street as well as shop-in-shops in Harrods, Selfridges and Dover Street Market. Outside London, it counts one shop-in-shop at Selfridges in Manchester plus a concession at Heathrow.

Looking ahead, Dior plans to open stores in Atlanta and Barcelona this fall, along with dedicated fine jewelry boutiques in Geneva and Paris, and Dior Homme units in Toronto and Macau, Toledano noted.