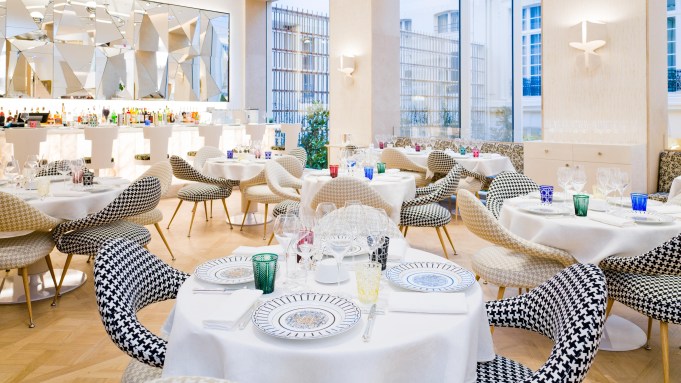 PARIS — Where in the world can you relax in an onyx marble bathtub, have a facial, enjoy a meal, order made-to-measure clothes and visit a museum — all under one roof?

Those are just some of the services on offer at Dior’s historic flagship at 30 Avenue Montaigne in Paris, which is set to reopen on Sunday after more than two years of renovations.

“It’s not just a flagship — it’s a universe that we present,” Pietro Beccari, chairman and chief executive officer of Christian Dior Couture, told WWD. “In reality, we should find a new name for it, because it’s a complex such as does not exist in the world, so it’s really a clear point that will mark the difference between us and our competitors.”

The building, which spans nearly 108,000 square feet, houses the French luxury brand’s largest boutique worldwide alongside La Galerie de Dior, the biggest permanent exhibition space dedicated to fashion in the hands of a private house. It’s home to rotating displays and preserved historic spaces, such as the original office of founder Christian Dior.

Also under the same roof are the haute couture ateliers, which have called the building home ever since Dior inaugurated the space in December 1946, just weeks before presenting his first collection and launching the revolutionary New Look.

For the first time, they will be joined by the high jewelry workshop, where customers can have precious stones mounted on custom-designed pieces. Meanwhile, the historic salon where the first fashion shows were held will now host dinners and special events.

In addition, 30 Montaigne is home to the Monsieur Dior restaurant and a Dior pastry café, housed in an atrium space filled with towering tropical trees and a bed of flowers. Both are run by French chef Jean Imbert, who also oversees the Café Dior adjacent to the exhibition gallery.

There is an alcove dedicated to beauty treatments, and last but not least, La Suite Dior, a private apartment whose keys give guests the full run of the building, with a dedicated staff of six to eight people around the clock, ranging from chefs to personal shoppers.

“It will be on command, and if you wake up because you’re jet-lagged and you feel like going to visit the museum in your bathrobe, you’ll be able to do so,” Beccari said. “There will be always someone awake. I’m fascinated by the thought that 30 Montaigne will never sleep.”

The project was orchestrated by architect Peter Marino, who stuffed the space with original artworks, including a suspended installation, resembling falling paper leaves, by Paul Cocksedge in the entrance rotunda of the store, and a 26-foot-tall rose sculpture by Isa Genzken, which towers over the circular staircase in the center of the boutique.

“I’ve never done such a complex construction project during a worldwide pandemic,” Marino said in an email interview. He used more than 100 materials, from white stucco textures to custom-embroidered silks and cerused oaks, and worked with Belgian landscape architect Peter Wirtz on the three gardens that punctuate the space.

“One of the most exciting aspects of the Avenue Montaigne project is that it is a journey through the inner essence of the brand — expressed through the architecture, interior design and experience of each space,” he said.

“It’s not one idea throughout, but rather, walk-through spaces that tell a story, that keep the customer engaged and emotionally connected with Dior from start to finish. It’s about creating environments that allow the customer to explore the brand in a beautiful, immersive, delightful way,” Marino added.

Beccari said he came up with the idea within the first 100 days of arriving at Dior in 2018. He was understandably nervous about presenting it to Bernard Arnault, chairman and CEO of parent company LVMH Moët Hennessy Louis Vuitton, as it involved not only closing the brand’s number-one boutique, but also temporarily relocating the couture workshop.

“It was a bit crazy, but you know, finally, I think I met the Mr. Arnault that not a lot of people know, the one that is not really so rational and so calculating every move, but someone that is able to envision something and clearly decide with his stomach, with his intuition,” the Italian executive recalled.

“I was lucky enough that he saw the vision, he understood it and he followed me, and I must say that today, when we go through it, we are both very, very proud of what we did,” he added.

Dior himself liked to call it a “refuge of the marvelous.” He opened his first boutique, called Colifichets, at this very address, selling gifts and objects for the home. Nowadays, there is little the Dior boutique doesn’t offer, from handbags in exotic skins to made-to-measure tuxedos, alongside the full array of women’s and men’s ready-to-wear and accessories.

Women’s footwear is displayed next to a specially commissioned 10-foot-wide video installation of flowers in motion by media artist Jennifer Steinkamp, while a wood-paneled alcove, with a marble chimney and a crystal chandelier, houses evening shoes. There’s a personalization space for bags, shoes and eyewear, and a corner dedicated to knitwear.

The VIP men’s space, showcasing the designs of Kim Jones, has a 15-foot-high ceiling. It features a wall decorated with white canvas “toiles” on dressmakers’ forms, and leads onto a glass-enclosed winter garden, where a colorful steel sculpture by John Chamberlain sits alongside comfy sofas and exotic plants.

To celebrate the opening, the store is offering a host of exclusive products. They include box sets dedicated to the Lady Dior, Dior Caro, 30 Montaigne and Saddle handbags, each composed of four miniature bags embroidered with sketches.

There is also a limited-edition bag, in the shape of the building, designed with artist Penny Slinger, who collaborated with Dior womenswear designer Maria Grazia Chiuri on her fall 2019 haute couture line. It’s inspired by a gold concept outfit, also modeled after 30 Montaigne, that appeared in that show and is now on display in the gallery space.

It’s just one example of the many synergies between the different sections of the complex, which is actually made up of several adjoining buildings that literally provide bridges between the past and present via a number of secret passageways.

“It’s important to know where we come from, and I believe that luxury brands are a perfect mix between tradition and modernity,” Beccari said. “Mr. Dior never opened a pastry shop, but I’m sure that if he was here to ask, he would say absolutely yes, because he was a bon vivant. So there is a tradition and there is a modernity represented in the building, and I think it’s a good equilibrium.”

Nowhere is the history more alive than in La Galerie de Dior, which is headed by Olivier Flaviano, the former director of the Yves Saint Laurent Museum in Paris. Its set design is by interior architect Nathalie Crinière, who previously conceived the brand’s 70th anniversary retrospective at the Musée des Arts Décoratifs in 2017.

Like the boutique, the gallery stretches more than 21,500 square feet, divided into 13 thematic spaces housing 130 haute couture outfits, 33 toiles and between 150 and 200 accessories, in addition to scores of previously unseen archive documents. It’s open every day except Tuesday from 11 a.m. to 7 p.m., with admission costing 12 euros.

Visitors head up to the third floor by lift, and exit down a spiral staircase with a spectacular decor made up of 1,874 color-coded objects — sure to become catnip for Instagram. These include 452 miniature dresses and 1,422 3D printed objects, including small-scale models of the Saddle and Lady Dior handbags.

The exhibit opens with Dior’s iconic Bar jacket, in a room exploring different facets of the couturier’s 10 years at the helm of the house. A separate room highlights all of the brand’s subsequent artistic directors: Yves Saint Laurent, Marc Bohan, Gianfranco Ferré, John Galliano, Raf Simons and Chiuri.

Crossing over the historic staircase, where photographer Willy Maywald immortalized Marlene Dietrich attending a 1955 show, you’re greeted by a Bertrand Buffet painting of Dior, before entering the room that was his office from 1946 to circa 1952.

Next door, visitors can peer through a glass floor at the original wooden cubbyhole where models did their hair and makeup, which has been decorated to look like it’s still in use. The building continued to host fashion shows until 1981, and the model “cabine” was later used as a stockroom for finished wedding gowns.

Further rooms explore topics including the haute couture process; Dior’s relationship with artists, and his former career as a gallerist; the brand’s Miss Dior and J’adore fragrances, and celebrities in Dior, with dresses including a replica of the midnight blue satin slipdress that Princess Diana wore to the 1996 Met Gala.

Highlights include a ballroom-style space showcasing some 30 designs — including a Junon dress from 1949 — that is bathed in a seven-minute video mapping projection. La Chambre aux Merveilles, a chamber of curiosities, features items ranging from a rhinestone and velvet choker from Dior’s first collection in 1947 to embroidered shoes featured in Chiuri’s most recent haute couture show.

Beccari said he expects the gallery, which can welcome up to 335 people at a time, to be fully booked every day. And despite the ongoing impact of the coronavirus pandemic, he’s confident the store will be a magnet for tourists and locals alike.

“We are positive that the future will again bring enough tourists to Paris, first of all, and second, this is a very special place for cocooning clients of any nationality, and especially probably the French, which are loving Dior more and more if I look at the figures,” he said. “I’m not worried about the type of money that we will do at Avenue Montaigne. I think we’re going to be OK.”

On Jan. 18, Dior raised prices worldwide by an average 8 percent, citing inflationary pressures, in a move that reflects the luxury industry’s strong pricing power after a record year for many brands. And the house clearly believes money is no object, with Beccari declining to reveal the cost of staying in La Suite Dior. “You will discover if you call and book it,” he said.

Signaling the brand’s strong momentum, he did not rule out opening similar multiuse flagships elsewhere. “We didn’t launch this project with the idea of doing a series of these projects,” he said. “So let’s see how it works, and if we have an appropriate level of space, and we see that the product works very well in Paris, the answer is: why not?”

An Homage to Dior at Bergdorf Goodman