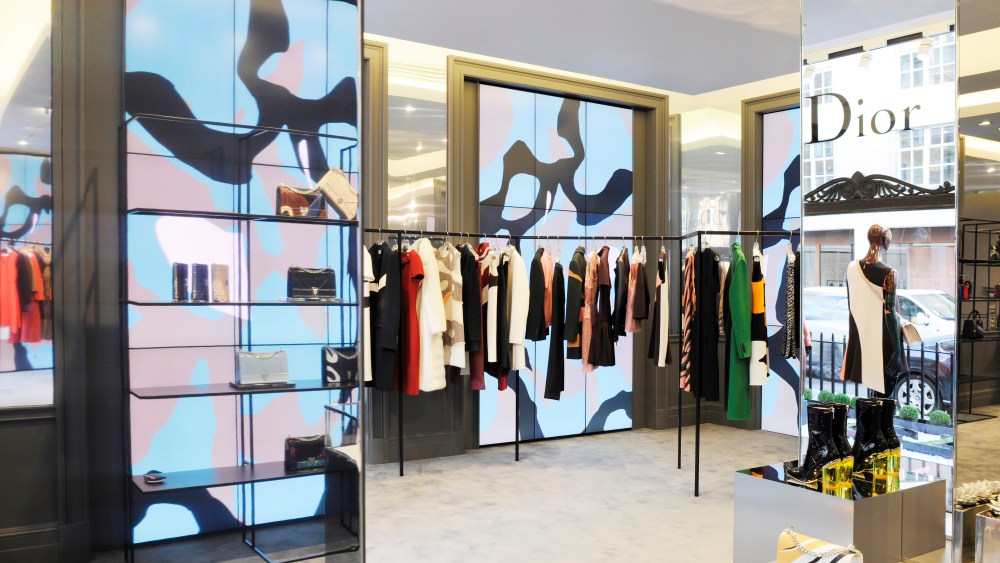 D-LITE: Dior will unveil a pop-up shop today on London’s Mount Street with a new look that features digitized illustrations by Mats Gustafson, giant video screens and a big cabinlike dressing room in the center of the space.

The store, at 10 Mount Street, spans 1,296 square feet and is housed in the former William & Son space. It has dovecote-gray carpets and walls, and is adorned with small teardrop-shaped mirrors, like bits of stained glass, by Hubert Le Gall; a gray sofa by Vladimir Kagan, and a Nuage table by Guy De Rougemont.

The cabinlike dressing room is gray on the outside and pink on the inside while mannequins are covered in the abstract camouflage prints from the current fall collection. The space stocks women’s ready-to-wear, accessories, footwear and leather goods designed by Raf Simons for fall 2015.

Floor-to-ceiling video screens move and blink with Gustafson’s watercolor images of the fall 2015 show — but only for now. As of Nov. 3, the look of the shop will change and echo the first installment of the cruise collection, and the 12 big video screens will broadcast a whole new visual story.

The store, located just behind the Connaught on the north side of the street, will remain open until the first semester of 2016, when the brand’s flagship is set to open at the top of New Bond Street.

The building has a redbrick Victorian façade, and a little garden out front bearing the initials CD. Neighbors on the street include Christopher Kane, Roksanda, Simone Rocha, Pringle of Scotland, and Goyard.

On Thursday, the brand plans to mark the opening with a GifBoom booth, where customers can create animated images of themselves. The brand’s Conduit Street shop — a 10-minute walk from Mount Street — will also remain open.