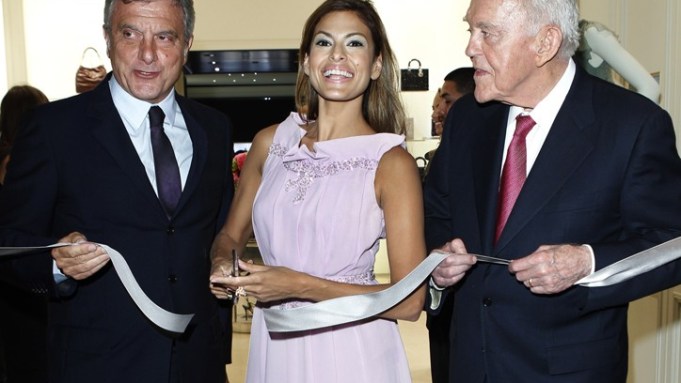 Citing the high-end consumers who shop at the mall, Sidney Toledano, Dior’s global president, said the 12-year-old unit designed by Peter Marino, which opened Wednesday, “is one of our most important stores in California.”

Toledano said Dior, with three freestanding stores in California and 19 in the U.S., has no plans to grow the number of its boutiques on the West Coast, but will expand the size of existing locations. The 57th Street flagship in New York, Dior’s largest U.S. store, will reopen in December, and the Rodeo Drive boutique is due for a makeover next year.

The fashion house marked the South Coast Plaza project, which took about three months to complete, with a ribbon-cutting and a cocktail party Wednesday at which Eva Mendes, who has worn Dior to the Academy Awards and the Cannes Film Festival, was the host. There was also a dinner cooked by celebrity chef Charlie Palmer for 30 guests at the home of Henry Segerstrom, managing partner of mall owner C.J. Segerstrom & Sons.

The store features a transparent floor-to-ceiling, double-layer, backlit glass facade that emulates the iconic Dior “cannage” pattern. The interior is divided into four areas — accessories in the entry space, then ready-to-wear, shoes and the brand’s first fine jewelry salon in the U.S. in three separate rooms. The jewelry retail concept made its debut in the Geneva and Shanghai stores six months ago and features offerings from $450 to as much as $1.3 million.

The decor mirrors the design concept featured in Dior’s global flagship on Avenue Montaigne in Paris, combining traditional and contemporary materials and finishes such as pure white marble floors, wool and linen carpets and mirrored glass walls and shelving units finished with fine silver wire mesh. Rob Wynne’s “Night Out” artwork illuminates a mirror in the shoe room and a life-size screen shows the latest runway shows in the rtw room. This combination of traditional French and contemporary elements aims to create the feeling of a luxurious private apartment.

The fine jewelry salon features dark gray walls — the other three rooms have primarily white walls — and gray curtains frame the in-wall display cases. A ceiling light fixture is shaped like the astrological symbol of Aquarius, which was Christian Dior’s sign.