Extensive renovations and an expansion of the store at the DFS Galleria Waikiki added 50 percent to its original size. 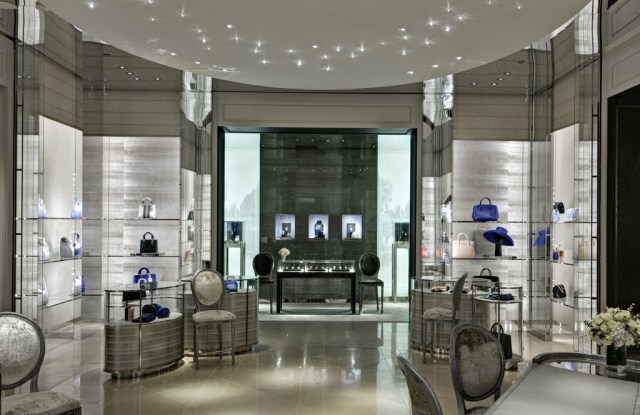 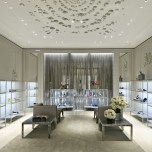 The Dior boutique at the DFS Galleria Waikiki in Honolulu has reopened after extensive renovations and an expansion that added 50 percent to its original size.

The store was inspired by the design concept of the Dior boutique at 30 Avenue Montaigne in Paris, which was designed by Peter Marino. The interiors are a study in gray, the favorite color of designer Christian Dior, and feature art by Rob Wynne, including his word mirrors and “dot” mirrors. Furniture was created by artists and designers such as Laurent Chauvat, Hervé Van der Straeten and Alex Turco.

In the fall, the brand is opening a second New York store in SoHo, said Pamela Baxter, president of Dior’s U.S. division. She said other locations for new stores include Houston — the company opened a store in Dallas last year — Chicago and possibly Atlanta. “We’re interested in all the majors,” Baxter said, noting that Dior is opening a unit in the Miami Design District in spring 2015 and unveiling a store in Vancouver this year. It will be Dior’s first freestanding store in Canada.

Baxter said the company is renovating its entire fleet in North America based on the Avenue Montaigne prototype. Units at the Bellagio in Las Vegas and Americana Manhasset in New York will be converted over the next two or three years. All the stores in the North American market should be renovated by the end of 2017. “We started with the East 57th Street flagship two years ago and redid the Rodeo Drive store last year,” Baxter said.

Dior operates a second unit in Honolulu at 1454 Ala Moana Boulevard. “The Hawaii market is changing,” Baxter said. “Hawaii was predominantly Japanese tourists and over the years it’s changed. Now there are Canadians, Australians and lots of Chinese.

“The client that shops in Honolulu likes color; it’s a warm-weather climate,” Baxter said. “We didn’t create anything exclusively for the opening of the store, but when you visit the store you see that we use a lot of color in terms of merchandising handbags, ready-to-wear and shoes.”

The predominantly Asian clientele means stores have to pay attention to the calendar and Japanese and Chinese holidays, which don’t correspond to North American holidays. “We have some of the top clients, the very important clients that live in other cities and shop in Hawaii three or four times a year,” Baxter said. “They might live in Hong Kong, Taipei or Tokyo. It’s hard to distinguish the local client from the tourist.”