"We came out stronger from this,” said chief executive officer Pietro Beccari, as the brand unveiled its cruise show in Italy.

PARIS — To say that Dior is firing on all cylinders would be an understatement. At a time when most brands are cutting costs to compensate for the impact of the coronavirus pandemic, the French luxury house is stacking up high-visibility events in Europe and China this week.

“Many people asked me the question, ‘What have you been doing during confinement?’ Well, my answer is, we worked our ass off, literally,” Pietro Beccari, chairman and chief executive officer of Christian Dior Couture, told WWD a few hours before the label unveiled its resort collection in Italy on Wednesday.

Dior lined up some 90 looks for the 27-minute show in Lecce. They will be delivered to stores from Oct. 29, with thematic windows running through the crucial holiday season. “I’m keen to say this is a real collection. You know, many people did capsules,” Beccari noted.

Due to ongoing safety restrictions in Italy, where the coronavirus has killed more than 35,000 people, the line was shown in front of just 100 friends and family, alongside executives including Bernard Arnault, chairman and ceo of Dior parent company LVMH Moët Hennessy Louis Vuitton.

But Beccari insisted the livestreamed show had all the hallmarks of its previous cruise extravaganzas. “There is the excitement of finding back the same tension, the same vibration in the air that you feel before a big moment,” he said.

“There was a lot of emotion yesterday, during the rehearsal. There were some tears as well, because we were thinking about everything we went through for the preparation of the show,” the executive added, referring to the teams who kept working during the lockdown.

“It has been a lot — a lot, a lot. And this crisis, if I may [say so], even solidified and strengthened our unity and our solidarity as a team. In reality, we came out stronger from this,” he noted.

This month alone, Dior has a full pipeline of projects. On July 4, the brand opened a new five-story flagship on Rue Saint-Honoré in Paris. Maria Grazia Chiuri, in charge of women’s collections, unveiled a line of miniature haute couture gowns on July 6 with a short film directed by Matteo Garrone.

This was followed by the global launch of the eagerly awaited Air Jordan 1 OG Dior sneaker on July 8. Next up, Kim Jones, artistic director of men’s wear, presented his spring 2021 collection, inspired by Ghanaian painter Amoako Boafo. 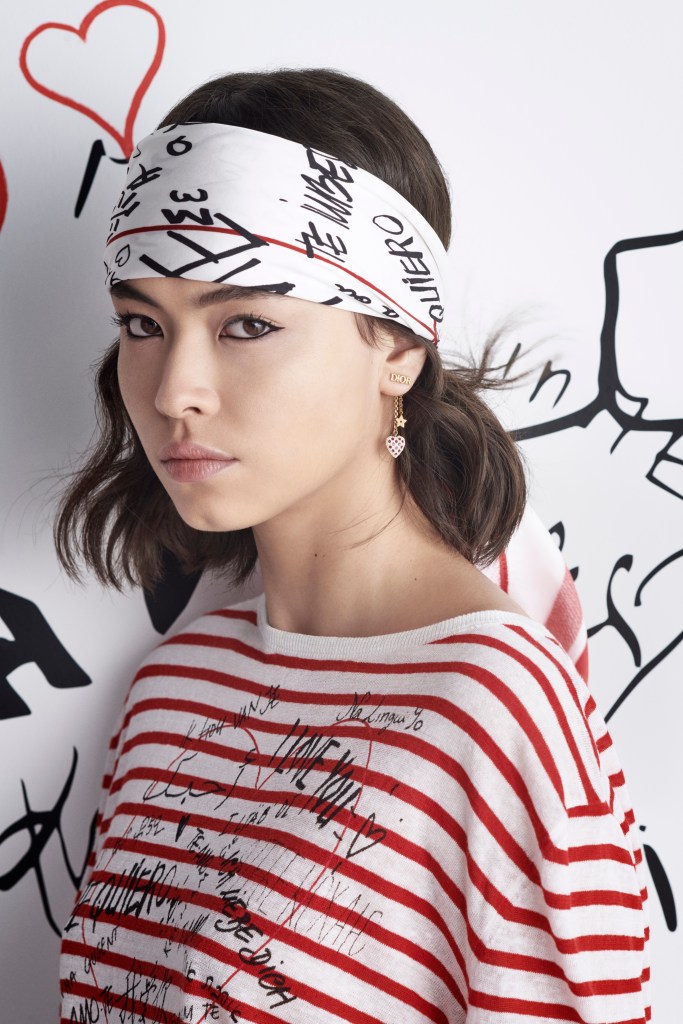 A look from the Dioramour capsule collection.  Paola Mattioli/Courtesy of Dior

This week, Dior is staging three events in China. On Thursday, it will launch its Dioramour capsule collection with a series of pop-ups across the country ahead of Chinese Valentine’s Day. The following day, the brand will host a cocktail to inaugurate its “Christian Dior: Designer of Dreams” exhibition at the Long Museum in Shanghai.

Beccari noted that at almost 26,000 square feet, the show was twice as large as the one held at the Victoria & Albert Museum in London last year. With its French teams unable to travel, some people in Paris were waking up at 3 a.m. every day to guide Chinese colleagues through the set-up, he added.

On Saturday, Dior will host a private dinner for 300 Chinese couples in Shanghai to present its new high-jewelry collection, which would normally have been unveiled during Paris Couture Week in July.

“If you consider all the activities that we are doing in July, it’s just mesmerizing,” Beccari said. “I cannot say anything except that I’m very proud of my team.”

He declined to comment on whether he expects Dior to outperform the rest of the luxury market this year. Faced with a global collapse driven by lockdowns and the shutdown of tourism in all key markets, the sector should see a contraction of between 20 percent to 35 percent in 2020, according to consultancy Bain & Co.

LVMH is scheduled to publish first-half results on July 27. Although the luxury conglomerate does not break out the performance of individual brands, it has singled out Dior in recent quarters for its rapid growth and rising profitability, meaning the label could suffer less than its peers.

“I hate to compare Dior to other companies. We are trying to do our job and to do the best for the company. We think that Dior has a big potential. As a brand, I think we are showing it,” said Beccari.

“If we are here, if we are investing in the future, it’s because we all — LVMH in primis — believe in the brand and the potential of the brand, and we are optimistic enough to do the investments that we do because we feel the desirability of the brand is very strong,” he added.

Beccari noted local Italian officials had thanked Dior for providing employment in Lecce at a time of economic crisis, in addition to promoting tourism to the region. “That’s one more reason to be happy tonight,” he concluded.