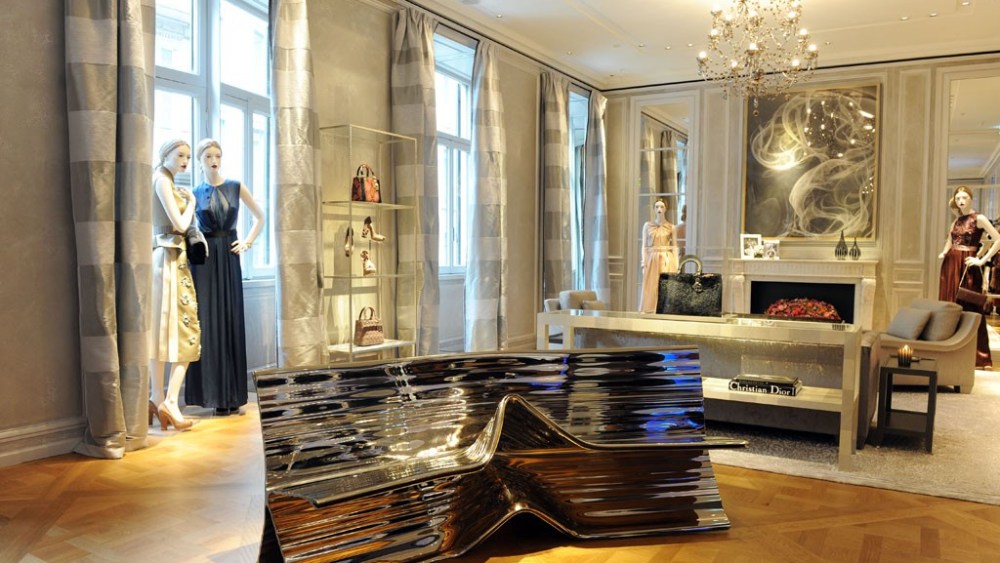 MILAN — A few days after the successful and acclaimed debut of Raf Simons as creative director of Christian Dior, the French luxury fashion house unveiled its newly renovated and expanded boutique on Milan’s Via Montenapoleone. The opening was marked by an event to celebrate the “Lady Dior As Seen By” exhibition at the city’s Triennale museum, which, after stops in Shanghai, Beijing and Tokyo, is joined by a project with the Academy of Fine Arts of Brera.

“This is a key moment,” said Dior’s chief executive officer Sidney Toledano, sitting in the store’s VIP room, opposite a Martin Kline sculpture and a Paul Evans table, clearly pleased with the results of 18 months of work at the venue, conceived by architect Peter Marino.

“We’ve been working on the restructuring of the building, which allowed us the opportunity for more volume,” he said. The two-story flagship almost doubled its space to 5,346 square feet from the original 3,024 square feet when the store opened in 2001. Toledano was quick to point out, however, that the company was “not looking for size but a diversity in showing the product” in the store, which carries ready-to-wear, accessories, Dior Joaillerie and Dior Horlogerie.

While built as a “French hotel particulier, as a big apartment,” with references to Dior’s Avenue Montaigne boutique and Paris, Toledano underscored how the building and store reflected Milan’s understated beauty. “If you don’t go inside, you don’t understand. I lived in Milan for a year in the Seventies, and this is how I discovered the most beautiful apartments, step by step,” he explained.

The renovation of the boutique and the event come at a time of slow growth in Italy’s economy, but Toledano remains upbeat about business here and in the euro zone. “We cannot deny the reality [of a general crisis], but we are doing really well in Italy, even with the pop-up store in Milan [opened during the renovations on the flagship], and in Rome and Florence,” said Toledano, crediting the company’s focus on “the right people and [direction].”

The executive defined Italy as “a very important market,” and Italians as “among the most sophisticated and demanding customers. They have the culture of luxury, an eye for details and quality, and they understand the materials and the constructions.  It’s a country of artisans.” While praising the Milanese for understanding quality, he added that Milan is also a formidable draw for tourists. “We thought it was important to show a state-of-the-art store here,” he said. “Luxury is based on a long-term strategy, and luxury will continue to have strong growth in big European cities through a local customer base and tourists.”

Referring to the exhibition, which brings 77 works of art to Milan, Toledano said the firm saw an opportunity to “pay homage and give back” to Italy, as the Lady Dior handbag was first manufactured in 1995 by Italian artisans in Scandicci, outside Florence, in a “small atelier” that was later to become one of the brand’s own factories. “It’s about a love story with Italy. Lady Dior was born here, it’s French with Italian roots and it’s hugely successful here,” he remarked. Toledano went on to say that he remains “amazed” at how the bag, originally presented by the former French First Lady Bernadette Chirac as a gift to Lady Diana Spencer, has inspired so many artists.

“The difference between an iconic bag and a best-selling or ‘It’ bag is that the first has a kind of soul. If an artist has no reaction to it, it’s not iconic. The Lady Dior is not the result of a marketing process. It’s inspired by the values of the house,” said Toledano, flipping through the pages of the catalogue, pointing to a photo by Rune Guneriussen of a string of Lady Dior totes positioned on the shore of a lake on a foggy morning, or to an image by one of the two final winning Brera artists, Alessandro Carano, where the bag is merely hinted at, sitting behind a glass and near an ashtray and a lighter. “You see it’s there, but it’s not in your face,” said Toledano. “There’s only a small part of the bag, but you feel its presence, it’s a bag with charisma.” Bruce Weber, Peter Lindbergh, Patrick Demarchelier, Mikael Jansson and Olympia Scarry are among the artists included in the exhibition.

As part of a special project under the patronage of the Brera Academy, Dior asked 24 young artists from the school to create a piece inspired by the Lady Dior. A jury selected 12 works of art to be featured in a catalogue and, among them, two artists whose work will be exhibited until Nov. 4 at the “Lady Dior As Seen By” show. “This is a tribute to Christian Dior the couturier, who believed in talent. It’s a mission to bring the most talented people to our sector, so that they don’t go to other types of industry. We need talents to protect our industry. One of the backbones of Dior is the atelier, its spirit and values,” said Toledano.

“Dior was a gallery owner before he became a couturier. His dream was to go to art school, and he was associated with Salvador Dalì, [Pablo] Picasso, [Jean] Cocteau.…Clients love that we sponsor art exhibitions. It makes sense.”

In line with this, Marino commissioned a number of unique works to a group of contemporary artists for the store. The color gray is one of the dominant elements in the boutique and is also a reference to the legendary designer, as it was his favorite color. The shelves are covered in 56 shades of gray. “In Dior’s Avenue Montaigne flagship, there are around 70 nuances of this hue. It’s a real Parisian color. It’s the city’s sky that is so inspiring,” said Toledano.

In the vestibule of the stunning staircase, with a custom-wrought iron railing reproducing one of Dior’s favored flowers, the lily of the valley, stands the “Pistol” sculpture by Joel Morrison.

“Each time, we push the concept, and I’m so happy with the staircase and the Joel Morrison sculpture. It’s brand new, it’s exactly the touch I wanted, it could not have existed five years ago,” said Marino in a phone interview from his studio in New York, as he was putting the finishing touches on a new Dior boutique that will open in three weeks in Los Angeles.

Referring to the textiles he designed himself that were created in Japan and are found on panels in the walls of the VIP room, Marino explained: “I always like to remind that this is a couture house, and say, Look at what we can do. Customers feel that, they know….”

Asked how Simons will play into the store concept going forward, Toledano said he’s already seen “an interaction” with Marino. “They both love architecture.”

Marino said Simons’ “cleanliness with an architectural feeling was a breath of fresh air. We have to philosophically catch up.” Coming up next for them is a new boutique in Hong Kong, he said.

A live mural with 124 LCD high-resolution screens produced by the artist Oyoram has images synchronized with those showing at the Maison’s Paris headquarters that feature links to Dior and its history. A round bench by Claude Lalanne inspired by a bouquet of ginkgo biloba flowers sits in the entrance, which is dedicated to handbags and leather goods.

On the first floor is the footwear area, embellished by silk velvet curtains, Liu Jianhua porcelain sculptures and placed below Rob Wynne’s “The Cosmic Lighting” work.

Other standout elements are a metallic-textured fireplace crafted by Juan and Paloma Garrido, a coffee table by Willy Rizzo and two chandeliers by Pae White, who also created a powerful wall of silver tapestry.

In September, Christian Dior said sales at the fashion house increased 28 percent in the first quarter ended July 31 to 323 million euros, or $405.7 million. Dior noted that revenues in its own stores advanced 36 percent versus the year-ago period. Revenues in the first half ended June 30 advanced 29 percent to 573 million euros, or $743.6 million.

Dollar figures are converted from euros at average exchange rates for the period to which they refer.