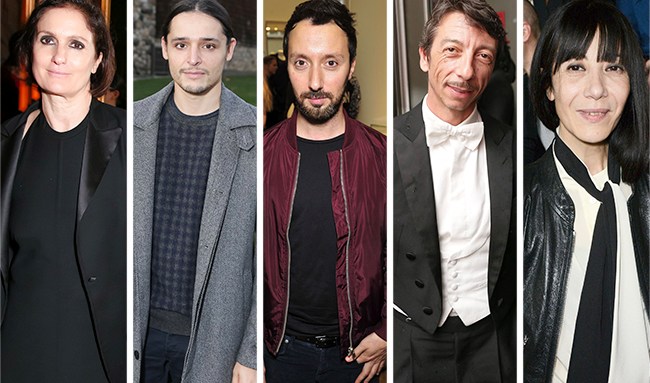 PARIS — If see-now-buy-now was the big story during New York Fashion Week, Paris is back to a familiar game: Musical chairs. And with what seems to be a faster tempo.

The French fashion week, which starts today for a nine-day run, features designer debuts at two mythic houses — Dior and Yves Saint Laurent — repeating the scenario four years ago, when Raf Simons and Hedi Slimane arrived in the same season.

The week also features Bouchra Jarrar’s debut at Lanvin and Pierpaolo Piccioli’s first solo Valentino, plus the return of Olivier Theyskens, who has cycled through Rochas, Nina Ricci and Theory over the past decade.

While each designer change has its own back story, observers agreed that a challenging period for retail and luxury is heaping pressure on brands to make noise and seduce fickle customers.

“The speed of designer change is increasing for sure,” said Luca Solca, managing director of equities and head of luxury goods at Exane BNP Paribas. “In a slow-growth market, you have fewer new consumers. Existing consumers have already bought yesterday’s styles. If you want to sell to them you need new ideas. Oftentimes, incumbent designers can only produce more of the same and that is not enough to turn heads.”

In Solca’s view, “disruption” is the goal as “brands want to stay relevant and hot. Replicating blockbuster successes is no longer enough.”

Floriane de Saint Pierre, who runs a Paris-based executive search and consulting firm, noted a variety of circumstances lie behind this season’s changes. Moreover, the mission of today’s creative directors is changing as consumers shift how and why they spend money.

“And more so for Generation Z, which favors experience rather than ownership,” she said. “Creative leaders have the opportunity to build empathic relationships with their audience, not just a transactional one. It is a major shift that puts ‘design thinking’ at the heart of the creative process.”

She explained that “the creative leaders who will make the difference are the ones who ground their work in a societal perspective and express it in all interactions consumers have with the brand, whether digital or physical.”

De Saint Pierre argued that a successful brand must be connected with the times; produce impeccable designs, and a peerless execution through to the end consumer.

“I have never seen a brand being successful without those three elements. The minute one of these three element is missing, a brand declines,” she said.

Among other hotly anticipated shows this season is the return of Theyskens, who over the past two years has been laying the groundwork for his self-funded venture. The Belgian designer, who catapulted onto the international radar in 1998 when he dressed Madonna for the Oscars, last paraded his signature collection in 2002 when he joined Rochas.

“I have been wishing all along my career to be able to launch my brand and to develop further the work that I started when I debuted under my name in fashion,” he said, noting that his contracts with Rochas, Ricci and Theory permitted him to develop his label in parallel.

To be sure, he is not an advocate of rapid musical chairs.

“I think that it weakens a brand to change designers too quickly. So in a logical world, it shouldn’t speed up,” he said. “I always felt it was logical to see things on a long-term basis, as if the sense behind all this is that there’s a brand philosophy and a patrimony to build on — as well as a relationship with the customers, a story to tell, an image to explore, a vision. It takes time.”

Still, he acknowledged that “if a match is not optimal between a designer and a brand, it is probably better to not let things last too long.”

Retailers said they are excited by the designer debuts — with a few caveats.

She said the consumer shares the sentiment, closely following the flurry of new brand castings. “It’s no longer trade information,” she said. “Designers themselves have become celebrities. They’re the equivalent of rock stars and have huge followings.”

Patel said social media is the leveler, allowing consumers to follow fashion’s talent shuffle, as sports aficionados track how teams trade star players. “I think the consumer is tapped into that and curious to see how it shifts the fashion landscape for years to come,” she said.

Sarah Rutson, vice president of global buying at Net-a-porter, cited a natural “ebb and flow within the life cycle of fashion,” which prompts changes.

“Nothing stays on top forever,” she said. “If business is not working, then of course brands need to determine whether this is the right direction for them going forward. I would add that creative direction can be highly successful for a few years and then lose steam as another brand takes the lead over it.”

The product rules and trumps the designer behind it, she stressed.

“When it speaks to a customer, they react. Look at Gucci and Balenciaga. Sometimes customers don’t know who the creative directors are behind the brand, but the majority do and follow the changes within the brand,” she said. “But the minute they don’t like what’s being done, they simply won’t buy it.”

According to Rutson, both disruption and continuity can work when a new designer is cast.

“Balenciaga is disruptive and working incredibly well, as is Gucci. Then you look at Clare Waight Keller at Chloé: That business has been successful for years and is growing stronger and stronger with great consistency,” she said.

Andrew Keith, president of Lane Crawford and Joyce, agreed that the customer is now driving the agenda. “They look for a strong creative vision, product quality and value. This discerning customer has expedited the speed of these designer changes and the complexity of the industry,” he said. “Brands have to get the right balance between their creative direction and the way it translates into their collections in a way that customers respond to. Continuous evolution is now more important than ever to stay relevant to the customer.”

He lauded Azzedine Alaïa and Dries Van Noten as examples of designers “who have been able to stay consistent to their vision while keeping their brand relevant and modern.”

At the other end of the spectrum, Gucci and Balenciaga are great examples of a successful disruption, Keith said. “And we are looking forward to seeing the evolution of Lanvin, Berluti, Brioni and Saint Laurent.”

The need to address Millennial consumers seems to be behind the hiring of designers in their 30s and 40s rather than more seasoned talents, Keith noted.

“This new audience is the reason why recruitments have skewed more toward the new generation of creative directors and reflecting non-conventional choices,” he said. “The Asian market — which has the highest concentration of young, affluent, mobile customers globally — is very responsive to newness and evolution and embraces the changes that occur in our industry. Our customers welcome new trends and they respond well to brands that they feel are under the radar, genuine in their narrative and authentic in their offer.”

Sounding a contrary note, Linda Fargo, senior vice president of the fashion office and store presentation at Bergdorf Goodman, said the “dizzying number of changes at the design reins of so many key brands is concerning both for the houses and for retailers.”

“In my opinion, the recent rate of turnover is excessive and is one of the negative markers of an increasingly sped-up, big-brand Insta-world,” she said.

While acknowledging the “extraordinary pressure” to keep sales humming in a challenging context, “the codes of the fashion business in terms of loyalty and longevity and relationship-building appears to be on the demise,” said Fargo.

She raised the question: If a designer and his or her talent and vision are what drives the engine of fashion and sets the house code, then why is it so disposable?

“Yes, we’ve seen great, unexpected results when the incoming vision is disruptive, but it shouldn’t become a formula as a way to evolve a brand,” she said. “Each brand and its lineage of designers and owners have distinct issues, so out with the old, in with the new isn’t necessarily the salvo. New isn’t always better.”

That said, “we applaud new approaches to revitalization, and creative directors don’t necessarily need to be graduates of Central Saint Martins, recognizing that in both challenging and fast-changing times, we need to think differently,” she added.

Tiziana Cardini, fashion director at Italy’s La Rinascente, also touted risks if the innovation at a brand is too strong, and a designer imposes too much of his or her own imprint.

“Consumers get confused and they have so much on offer,” she said. “If you want to build a loyal customer base, you have to build consistency. It has to change from season to season, but not in a radical way.”