By Miles Socha
with contributions from Teresa Lee
on March 5, 2009
View Slideshow 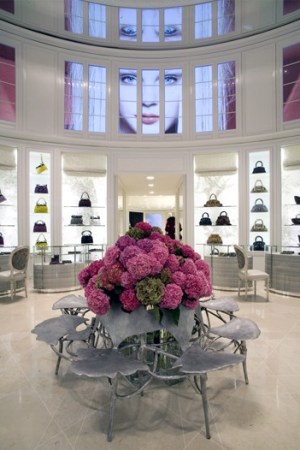 PARIS — Long before the economic crisis, Christian Dior started to further ramp up its luxury quotient, from installing thicker carpets in its boutiques and displaying more crocodile handbags on the shelves to dispatching direct-mail catalogues too sumptuous to consider discarding.

According to Dior president and chief executive officer Sidney Toledano, the crisis will only speed up a trend the French firm already spied: a widening gulf between ultraluxury players and also-rans.

“What we have done the last two years is consolidate our position at the summit of the luxury pyramid,” Toledano said. “It was the right choice. You either choose to be at the top, or down.”

Dior was prescient in another way: In marking its 60th anniversary last year, the fashion house and its couturier, John Galliano, tuned into the house’s codes — from the famous “bar” jacket to the cane-work print — and turned up the volume on its heritage via products and advertising. In the midst of a glut of “It” bags and shoes, “we were foreseeing that the customer might be saturated with the offer, and that they would at one point return to the strong players,” Toledano said in an interview in Dior’s stately gray offices on the Avenue Montaigne. “I think the crisis will accelerate this momentum.”

“In a time of uncertainty, it is a time for decisiveness and for conviction. It is the time to turn to brands you know and can trust,” Galliano agreed.

Toledano declined to divulge figures, but said the more luxurious store concept and upscale product offer has boosted the company’s “average basket” and that Dior has gained market share in handbags priced over 1,000 euros, or $1,250 at current exchange.

In May, the house will shoot a second batch of ads for the Lady Dior handbag featuring Oscar-winning actress Marion Cotillard, depicted in the first episode clutching the lace-like metallic grid of the Eiffel Tower, the purse slung on her arm etched with a similar pattern. (Also coming out soon on Dior’s Web site is a mini-movie with Cotillard devoted to the making of the campaign.)

Suggesting a trend back to “investment dressing,” the Lady Dior, first introduced in 1995, is now the company’s top-selling handbag worldwide, posting double-digit gains in recent years. The style, famously carried by the late Princess Diana, retails from $1,400 and never goes on sale.

Toledano said the bag has been among its top-three sellers since its introduction but moved into the top spot last year, ahead of the Cotillard campaign. His explanation? Customers are looking for iconic products, made with quality and with the “sure value” of buying into a top luxury brand, Toledano said. He also credited continued innovation with the style, which has appeared in “maybe 500 versions” since it was launched, from soft ones in woven leather to others in mink or crocodile.

“The crisis is even developing this,” he asserted. “People are ready to pay for a more expensive product. They consider it an investment. They want to be able to use the bag several times a week, so it has to be of high quality, functional and also a perennial.”

Toledano stressed people are “very selective” today when they make an investment, whether it’s in a house, stocks or a product. “It’s not that investment has stopped. People will continue buying, but in a different way,” he said.

For example, in the United States, where the downturn has hit hard, flaunting wealth is not apropos. “People want to be more low profile,” he said. “But you know, these people are not looking for cheap products. You can be low-key but still buy high quality.”

Dior’s next contender in leather goods is the Trente bag, named after the French word for the number 30, the historic Avenue Montaigne address for Dior and the number of key design elements of the bag, including a logo medallion in a very Thirties style.

Other iconic products include the Miss Dior shoe, a pump style that, like the Lady Dior, is refreshed continually, while maintaining its perennial appeal.

Despite a slowdown in sales and profitability in 2008 as business toughened, particularly in America and Japan, Dior cited good momentum in its own store network, which numbered 237 at the end of 2008.

Toledano said Dior would open about 10 locations this year with a focus on emerging markets: China, the Middle East and Russia, where he said business in the firm’s own stores is holding up and new units are slated for Saint Petersburg and Ekatrinaburg this year. All the new units are based on the luxurious, 13,000-square-foot Paris flagship, refreshed and enlarged by architect Peter Marino in fall 2007, boasting silk carpets hand-woven in Tibet, fitting rooms wallpapered in embossed leather, 56 discreet shades of gray and Louis XVI moldings.

Most of the new units are larger, ranging from 5,000 to 10,000 square feet, and showcase a range of products, including women’s ready-to-wear, leather goods, fine jewelry, men’s wear and all manner of accessories. “We want to show more of the universe,” Toledano explained. Coming soon is an 8,000-square-foot unit in Dubai — a vote of longer-term confidence in an area hit by an economic meltdown.

As reported, Dior has exited the logo and accessibly priced business as the company pursues its upscaling drive, which impacted 2008 sales. Products that are too short-term, fashion-driven and “too attractively priced” can “betray your client base,” Toledano said. “Our average price has increased over the past three years. Even 2008 versus 2007, there was an increase in prices, but due to an increase in value: the quality, the leather, the details.”

The Galliano era at Dior has been marked by some of fashion’s most fantastical moments, from Pocahantas couture arriving on a steaming locomotive to wild, rockabilly rtw with linebacker shoulders. More recently, Dior’s New Look has been more demure, exemplified by French First Lady Carla Bruni-Sarkozy, who has worn comparatively prim suits, dresses and coats for important state functions, including a visit to the U.K. last year that prompted a torrent of international media coverage and comparisons to Jacqueline Kennedy.

Toledano said the new fashion direction was “not to calm down, but to put the pedal to the metal on the Dior codes.”

In this aspect, he describes Galliano as a “gold mine. He’s the perfect designer to interpret that. Dior is not a black box. Dior is an open universe and someone like John can really interpret it. This is the role of John, to bring all this newness.”

He said the new fashion direction has been a commercial success, particularly in Europe, in both couture and rtw, and has fanned the loyalty of its customer base. “More and more women are coming each season to Dior to do their wardrobe,” Toledano said.

Galliano, couturier at the house for more than a decade, said he has absorbed Dior’s DNA, and “even after all this time, it remains endlessly inspiring, exciting and unexpected. Mr. Dior was a genius, I am in awe of what he created and only hope I can add and enhance this legacy,” he said. “This is a credit, not a creative, crisis. Our clients still want fashion, still want to be inspired. My role, now more than ever, is to dress their desires. Right now fashion should be a morale booster, escapist, excellent and constant. Now is the time to invest in luxury, quality and excellence.”

In tandem with the emphasis on iconic, upscale products is a shift in communication, with “less seasonal” campaigns like the Cotillard one coming to the fore. According to Toledano, advertising needs a story and strong brand elements to stand out from the crowd. “People are looking for real communication,” he said. “What is this brand telling me?”

Dior’s stable of celebrity pitchwomen, for fashion and beauty products, includes Charlize Theron, Monica Bellucci, Eva Green and Sharon Stone, and the house continues to rack up high-impact red-carpet moments, most recently with Sarah Jessica Parker in a white couture confection at the Oscars.

“Dior is not an apparel vendor; it’s not a bag vendor or a shoe vendor. This is why it’s so close to the movie industry,” Toledano said. “These actresses are showing the dream through Dior…this dimension of dream, glamour and elegance.”

Having famous women wearing Dior, from royals and political figures to celebrities, is not meant to achieve a short-term impact, but to feed the brand’s momentum and “add more substance to the story of the brand. It’s a long-term process.”

For his part, Galliano said it’s time to excel and push Dior and himself further.

“Dior was a house born postwar. It created a New Look that lifted morale and made women beautiful again,” he said. “I want to continue the legacy, to continue the dream and create modern beauty, luxury and new objects of desire. We need beauty, inspiration, creativity — and in downturns, it is my role more than ever to inspire the dreams of women.”