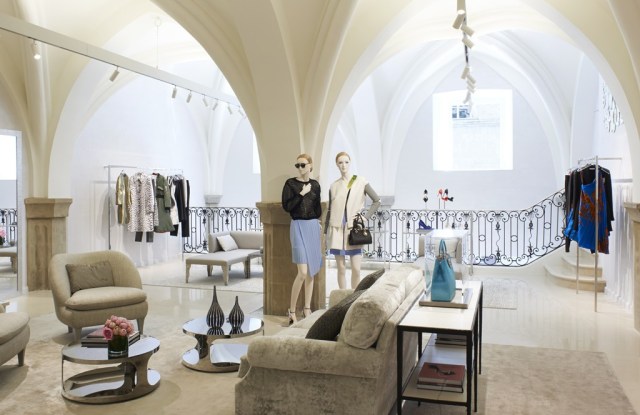 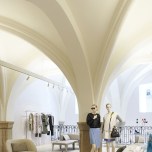 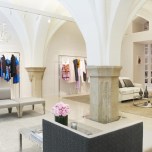 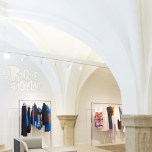 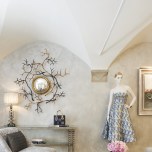 This story first appeared in the May 22, 2014 issue of WWD. Subscribe Today.

The well-wishing remark by Christian Dior chief executive officer Sidney Toledano encapsulates the increasingly strong commercial and social relations between France and Italy. Discussing the official opening of the brand’s new boutique in Florence this week, Toledano said he was “very positive” about the potential of the venue. He also is proud of the opening of a new handbag manufacturing plant in Scandicci, outside Florence, which he was visiting Wednesday.

“We have the petites mains [French term for seamstresses] in Paris and in Florence, too,” said Toledano.

The ceo also pointed to the French-Italian axis by voicing his “emotion” at seeing a photograph of the late Christian Dior and Salvatore Ferragamo on board the Queen Elizabeth sailing to the U.S. to receive the Neiman Marcus Award in 1947 — a photo displayed at the Ferragamo headquarters in Palazzo Spini Feroni on Via Tornabuoni, opposite the new Dior boutique. “We have been very well received here,” remarked Toledano, who hosted a dinner at Palazzo Antinori on Tuesday night.

“I am confident for the future, all Europeans are very proud of their tradition and know-how, while they are also looking for modernity, although some people are trying to depress [us],” said Toledano. “The winds are different, but it depends on how you position your sails,” he added, referring to the European economy.

“There are still successful people who don’t feel depressed, who have good assets and are looking for high-end quality,” he said, pointing to the “quality” of cities such as Florence and the boutique’s location near hotels and restaurants that draw affluent tourists. In particular, he expected brisk business generated by ready-to-wear designed by creative director Raf Simons. “It’s going to sell very well here, it’s very successful and now we can sell it in the best conditions, as customers who shop for apparel need time to try, to be seated and advised. It’s a different ceremony.

“Raf is very successful with Italians, they like modernity, with a couture spirit, and thanks to Raf, we are having a strong impact in Italy,” Toledano continued. “We recently opened in Capri, we are extending the Portofino store. These are unique, magic locations. We are doing very well in Italy last and this year.”

The new unit covers more than 2,700 square feet, doubling the space compared with a previous location farther along the same street, known for luxury shopping in the city. Located in a 14th century building, the unit blends Parisian and Florentine elements, such as the carefully restored vaults, in Dior’s staple gray color palette, and was designed by Peter Marino.

“As a policy, we need more space, it’s our strategy everywhere. We want to give VIP rooms, and to be able to present more products, without having a giant store. We like to convey the intimate mood of a home, of a French maison, with a kind of couture and feminine feel. We had been looking for the right location for seven months,” said the executive.

“Product is the star, the presence of artists in our stores is important, but it must be discreet like in a beautiful house,” said Toledano, who was in Cannes on Sunday night hosting a dinner with Elle magazine to celebrate the film festival.

A new Dior boutique will open in Vienna in the first week of June, and, before the end of the year, in New York’s SoHo neighborhood. “We continue to be very selective, and grow organically, also extending and renovating [units],” noted Toledano.