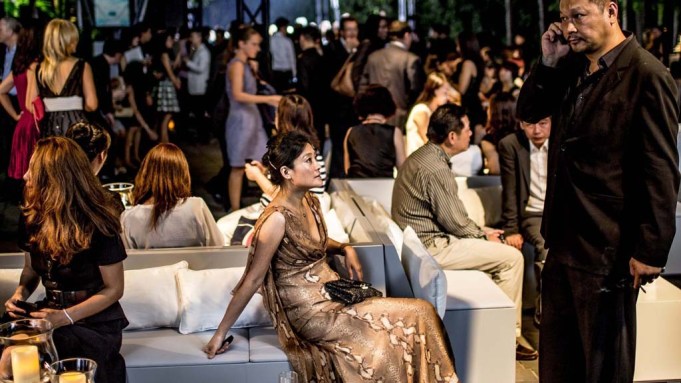 SHANGHAI — Dior just capped off a week of activity in China with back-to-back events in Hong Kong and Shanghai, inaugurating art exhibitions and reaching out to wealthy consumers.

Beginning with Christian Dior’s revolutionary “New Look” in 1947, the exhibition covers decades of vintage frocks designed by Dior himself, alongside John Galliano’s greatest hits and the current interpretation of the house presented by creative director Raf Simons.

The looks are exhibited in themed rooms, each representing Christian Dior’s varied preoccupations and inspirations. Gardens, the colors pink and red, the city of Paris and the longtime relationship between the French couture house and its famous fans are all on display, with the celebrity-themed room featuring gowns worn by Hollywood starlets to Academy Awards ceremonies — including the off-white number that tripped up Jennifer Lawrence as she attempted to take the stage to accept her gold statuette this year.

According to Toledano, it’s this thread linking Dior’s past and present, exhibited in a country many believe represents the future of luxury consumption, that makes “Esprit Dior” more of a “cultural moment” than simply a fashion statement.

“We wanted to do this show in China because we believe the Chinese, our current and future customers, today they need more understanding about the spirit of the company, beyond the dress or the bag they want to buy,” he said.

Earlier in the week, Toledano attended the Hong Kong incarnation of the house’s traveling “Lady Dior as Seen By” exhibition featuring artists’ interpretations of the house’s quilted handbag. That event coincided with the reopening of Dior’s refurbished store at The Landmark in Central.

As many luxury houses reel in their ambitious expansion plans amidst China’s changing political landscape and economic slowdown, Toledano said the brand will continue its slow and steady approach to expansion in the market.

“People are talking about the market slowing down, but I don’t read too much into the economics because we know our roots, I see the minds of our clients and potential clients and that’s why I’m not into the macroeconomics. In this country I see huge potential for us, we are already successful, which is because of the way we have approached the market, so we will continue the same way,” he said.

Though he declined to give exact figures, Toledano said he is very happy with the growth of Dior in Mainland China, which remains in “double digits” and hasn’t been affected “at all” by the Chinese government’s recent crackdown on gifting.

Among the segments doing particularly well in Mainland China, Toledano pointed to women’s ready-to-wear, men’s wear and the brand’s Victoire de Castellane designed line of fine jewelry, the ultrafemininity of which, according to the Dior president, has been a hit with Chinese women.