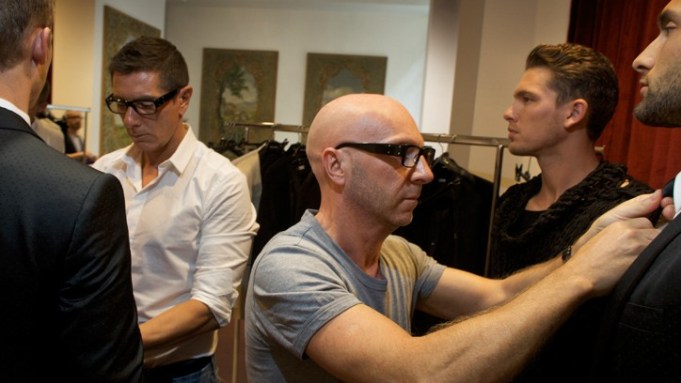 MILAN — It wasn’t just the desire to replicate the success of their women’s line that pushed Stefano Gabbana and Domenico Dolce to tackle men’s wear nearly two decades ago. The headache from not being able to find a cool white shirt or hip skinny black turtleneck contributed a lot, too.

“We were buying Comme des Garçons and Yohji Yamamoto because we couldn’t find anything we really liked,” recalled Gabbana, dressed in his signature combination of white shirt over distressed jeans.

Though Gabbana still buys Hermès belts, shirts by Paul Smith and Ralph Lauren’s Bermuda shorts, both designers feel their sense of style has matured and evolved over the years — just like their men’s wear.

Championing maximalism over minimalism, the duo set out to create the perfect beau for their sassy lady. The result is that men’s wear now accounts for nearly half the company’s sales of $2.3 billion in the fiscal year ending March 31, 2008, the most recent figures reported.

Complementary and self-complimentary, the two revel in the fact that they were fashion’s first design couple, the first label to use the ‘&’ and the first North-South duo (Dolce is Sicilian, while Gabbana is Lombard).

But like everyone else, they’re concerned about the economy and dwindling consumer spending. As a result, the designers aim to cut prices by 10 to 20 percent starting with the spring 2010 collections and have revised their delivery windows to better reflect the seasons and consumers’ needs to indulge.

Their reaction to the recession shows the business acumen the designers have developed over the last two decades. And their ability to adapt both their designs and business strategies partially stems from having gone through tough times before.

“When we launched our men’s collection in 1990, the Gulf War had just broken out and people left Italy via Switzerland because they didn’t want to take Alitalia,” recalled Gabbana. “In all these years, we’ve learned to maintain our calm and to not despair because acceptance is the resolution of all problems.”

Here, the designers share their viewpoints on the multifaceted fashion world, the looming 20th anniversary of their men’s wear in 2010 and fiscal scandals.

WWD: What should we expect to see on the runway on Saturday?
Stefano Gabbana: Style — lots of it. We’re trying to do a collection that is very hardcore Dolce & Gabbana, yet an evolution. As never before, we feel we want to stay true to our roots, to our mood — more sartorial and lots of Sicily.
Domenico Dolce: It’s hard to find the winning formula these days. We still want to do new things, but at the same time our customers are seeking our staple contemporary classics, ones that reflect the essence of the brand. But we’re not running to the archives.

WWD: Next year marks the brand’s 20th in men’s wear. What has changed and what has stayed the same?
S.G.: I was 26 when we launched men’s and I certainly didn’t know how to dress, so luckily, that changed. I shudder at old photos of me wearing cropped high-waisted jeans with boxy jackets. Maybe because we’re men, designing the collection comes easier because we can ask ourselves, “Would we really wear this?”

WWD: Do you have any celebratory plans yet?
S.G.: A book for sure, but no details yet. To that end, we’ve been looking at all our old shows, which has been interesting. As much as we loved some of our Baroque and military influences and our Dolce Vita-meets-Hollywood collection, we did some pretty ugly things, like horrendous shirt collars or weird proportions.

WWD: How do you feel when you hear that a historic brand like Christian Lacroix filed for bankruptcy?
S.G.: Unfortunately, the worst of the crisis is yet to come. It’s like after an earthquake when you to come to terms with the disaster. The effect hasn’t entirely taken its toll yet.

WWD: Do you feel you’re reached your goal in men’s wear?
D.D.: Absolutely not. There’s always something to improve, to perfect, to change. We’re not eternally unsatisfied, but we like to pursue perfection, knowing it doesn’t exist. But we don’t want to lose the illusion because it challenges us to go forward.

WWD: A recent press report said there is an Italian government investigation accusing both of you of being personally liable for more than $1 billion in unpaid taxes and fines. Would you like to comment?
S.G.: It’s ridiculous. The paper wrote evasion for 800 million euros based on hypothesis. Elusion isn’t evasion. Are they kidding? At this rate, I can speculate about anyone and anything. In any event, I’m relaxed because we did nothing wrong. We work honestly, we pay our taxes and we employ 3,500 people.

WWD: Would you ever consider selling a stake in the company or are you happy being independent?
S.G.: For us, there are only advantages to being independent because you can liberally tackle your ideas without external pressure. If there’s a problem, we resolve it without having to reunite 10 heads. If anything, it’s more strenuous.

WWD: Many of your men’s ad campaigns are sports-driven, featuring swimmers, soccer players and rugby players. How do you account for that?
S.G.: One difference between men and women is that men unconditionally love sports, even those who don’t practice one. I, for instance, have never kicked a soccer ball, but I like to watch a good game. All of today’s champions and sponsors are part of our society and culture. We started dressing David Beckham 10 years ago when he would come to our stores on Monday mornings to purchase clothes for Victoria when they were still dating. Not to brag, but we’re among the first.

WWD: Do you feel less pressure during the men’s shows?
S.G.: Certainly there’s less competition. Fashion is a newer concept to men than it is to women, so there’s a different type of curiosity. For example, we just found out that sales for belts are way down because consumers would rather spend the same amount of money on a cool T-shirt or top that refreshens their look.

WWD: Are you in favor of designers going to extremes in men’s wear?
D.D.: Yes, it certainly helps because all forms of extreme fashion, sooner or later, condition the industry.
S.G.: But when a designer is too ahead of the game, the midstream customer doesn’t always immediately understand. It takes time, but in the end it will come.