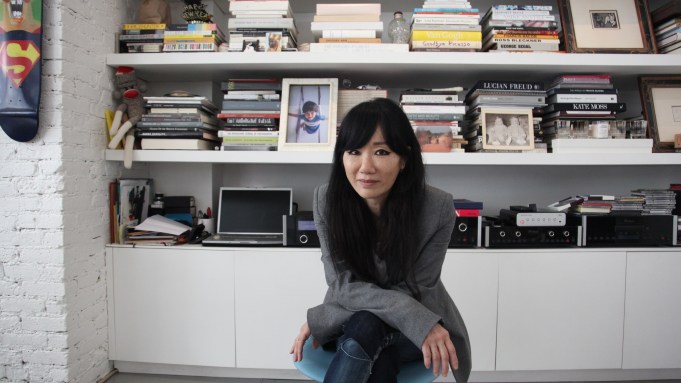 Fashion act one: silent partner, but not the kind with deep pockets and covert business-side clout. As DKNY’s other founding designer, Jane Chung defined a different kind of silent partner, working side by side with Donna Karan from day one, until the shakeup last year that took the LVMH-owned brand in a new direction.

Now Chung is ready for act two. After a finding-her-creative-self interlude, Chung is developing her own project, though not under her own name. Rather, she’s chosen a moniker audacious in the ambition it announces: Summā. “I want it to be not all about me,” Chung says during a visit brokered by, yes, Karan, who’s along for the reveal. “I want it to stand for me, but also I want it to stand for something good in a [broader] way.”

“She doesn’t want to do Ma and Pa. She wants to do ‘I am Jane Chung,’” Karan interjects with pride and partisanship. “We know this is commercial and it’s going to sell, there’s not even a question in my mind. I don’t think there’s anyone that wouldn’t want it.”

Chung’s is an interesting journey (excuse the Karan-esque verbiage). Working out of her Flatiron loft, a jewel of arty, impeccably casual allure, she designed a collection that she’ll show to retailers beginning this week — but not necessarily to launch for resort. In fact, with its emphasis on outerwear, the collection presents as fall. Chung has no specific expectations beyond hearing retailers’ opinions of her clothes and still nascent concept. To that end, she’s dubbed it her “portfolio collection.” Like the proverbial senior project, it’s her aesthetic manifesto; unlike most such pre-graduation efforts, this one is rooted in decades of in-the-trenches experience, rife with the expertise gleaned from trial, error, success, commercial demands and creative expression. And many years of getting dressed. “I think that when you get to a certain age obviously you want quality,” she says. “I do.”

Quality radiates from the racks lining the walls of Chung’s living room, the clothes a study in polished, adult chic. Their sophisticated calm suggests kinship with The Row, but with sportier, less self-consciously grand proportions, and with early Jil Sander, but more voluptuous and less austere.

Chung thought long and hard about what to do with her professional post-DKNY life. Her first reaction — a thought perhaps shared by other suddenly out-of-work designers who’ve given their all to this demanding discipline over the long haul: finished with fashion, over it, done. She thought about taking up furniture design or even tattooing — she’s ink-free but finds the art and process fascinating. Then, as the clock clicked down on her predetermined three months of “no fashion, not even looking at a magazine,” she had an epiphany and got a grip. “Fashion is what I do,” she says.

In September, Chung embarked on a factory tour of Italy, arranged by “a really good firm in Europe that took me around. I went to see the best shirt factory, the best sweater factory.” She became convinced that she has something to say, and that she should take the initial steps by working directly with the factories, without a staff or outside funding (yes, she’s interested). She returned to New York and said, “Donna, I’m going to do something. It’s not necessarily to sell [yet].”

Rather than feel intimidated by fashion’s ongoing fascination with young designers or her faux anonymity (everyone in the business knows of DKNY Jane), she felt encouraged by the recent ascent of “the Gucci guy, the Vetements guy.” She found “a little bit of hope that [Alessandro Michele], who’s been there for, like, 12 years, all of a sudden he’s given a chance, and did an amazing turnaround. Same thing with [Demna Gvasalia]. He was behind the scenes at Margiela for a long time. Now he’s heading Balenciaga and his collection.”

Not surprisingly, Karan became both sounding board and adviser, a continuation of a relationship that predates DKNY and even Anne Klein, where they also worked together. It began at Parsons, where Chung was a student when Karan and Calvin Klein were faculty advisers, and Chung was a student of both. (Everyone thought Chung would win Karan’s graduation prize, but she didn’t, having ignored the mentor’s warning on the perils of panne velvet. She won Klein’s prize.)

As Chung embarked on her collection, working with various factories, she found the total freedom exhilarating. At DKNY, there were countless people to bounce ideas off as well as highly defined parameters within which she worked. Now, in a sense, it is all about her. “You can’t ask, ‘What do you think?’ or ‘What do you need?’ You have to ask yourself,” she notes. For example, at DKNY, every fabric discussion started with price. “Here, if it’s beautiful, if it’s the best cashmere, it’s worth it. I’ll buy it. It’s so refreshing to be able to do that. At the same time, I know I don’t want to spend $300 on a T-shirt I wear every day. I want to pay $30 for it.”

Thus developed the germ of a two-tier concept. Lifestyle dressing, high-low — those catchphrases may be clichéd, but Chung makes a convincing case. The majority of the line, mostly black and white, was made in Italy of exquisite fabrics — dresses, coats, pants, crisp white shirts in tony cashmeres, wools, fine cottons. The silhouettes are unfettered but interesting — a coat with a button-on, scarflike panel that can be attached in numerous ways; shirtings each with a distinct but powerful perversion of the classic base, such as an offbeat, detachable ruffle. When priced, these clothes will carry luxe tickets. (As of last week Chung threw out a few ballpark prices — $4,000 retail for a cashmere coat.) One small rack holds a concise group — coat, shirt, assorted separates — produced in various locations in Asia and made from less luxurious fabrics. Unlike most secondary lines, they look neither younger nor funkier, but reflect the same aesthetic at a far more approachable price.

“I’ve always liked good things and I like everyday things,” Chung says. “I like a Collection cashmere coat with an American Apparel hoodie. That’s who I am.”

And how she sees her potential customer base. Chung’s “girls” are “Patti Smith and Blondie, Louise Bourgeois — older, younger, it doesn’t matter. I want to be democratic in the sense that this sensibility can go mass. I could be wrong, but I feel that the offering that’s out there is always so fast fashion. Some women who are 25, or 45, who don’t make the kind of money, they want to wear clothes that have the cut, silhouette. I don’t think that’s out there.

“When I say ‘best of,’ it doesn’t have to be expensive,” Chung continues. “If it’s a cashmere coat, yes, it’s going to be expensive. The idea is to source the best place [to make each item]. The best T-shirt you can do out of Korea, Peru, Portugal, Vietnam. Your intent and design philosophy are the same. If it’s jeans, I’d like to make it in the U.S. where it was invented. I don’t want to make jeans in Italy.”

That’s not all; Chung’s portfolio collection includes shoes and bags as well as clothes; her installation even features sneakers. For the moment at least, they’re totally for show; they’re Reebok.

Asked how, after two-plus decades with Karan, she has been able to define her own aesthetic as separate from that of Karan’s, she notes that at DKNY, Karan allowed her to “have my voice. It was an amazing experience, I learned everything.” She does offer snippets of contrast: she’s more architectural, Karan more drapey; she’s more into flashes of fanciful color (a point not currently evidenced in the clothes.).

“Jane is a Virgo,” Karan offers. “She was my balance. She wouldn’t only go along with me; she was very, very defined on who she was and what she wanted to do.”

In her musings on a business plan, Chung sees a two-pronged approach to retail with what she calls vertical and horizontal components. It’s ambitious. The former would be based in bricks-and-mortar and built around the luxe offerings with some more egalitarian pieces integrated into the mix. For the “horizontal” side, that accessible fashion, currently a far smaller portion of the lineup, would have a major presence online. In Chung’s vision, it could explode into “a new Gap. There’s a gap in that market — cool, classic-with-attitude at the price point.”

Before such a seismic coup can occur, Chung must tend to the pragmatic matter of pitching retailers, an endeavor she’s approaching with confidence and determination. “Bottom line, I want to do really good clothes,” she says. “There are plenty of people out there that are doing amazing fashion. In my opinion, my fashion is a little different, in a way a little quieter, but with oomph.”

A calm power years in the making. “There’s something to be said for experience,” Chung says. “I’m not so ready to go yet.”