The multifaceted summer arts installation links the brand and New York City with 10 artists and 10 cities from around the world. 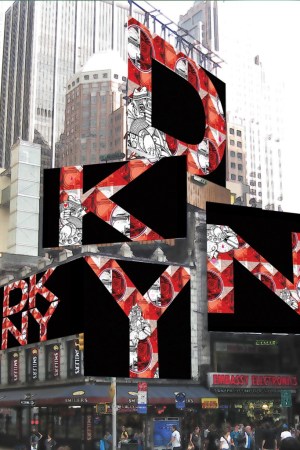 NEW YORK — In 2008, when the DKNY mural on Houston Street here came down after 16 years, SoHo lost the Peter Arnell-created visual that many had come to view as a city landmark that was as much a part of the area’s landscape as the cast-iron architecture.

Five years later, that wall still resonates for DKNY, and so, recently, Donna Karan International executives came up with a plan to reimagine the visual for today. Enter #DKNYArtworks, the multifaceted summer arts installation that links DKNY and New York City with 10 artists and 10 cities from around the world.

Working closely with Laird + Partners’ executive vice president and senior group creative director, Hans Dorsinville, DKNY commissioned artists in New York, London, Paris, Milan, Dubai, Hong Kong, Shanghai, Seoul and Tokyo to give their spin on the company’s logo via billboards, installations and kiosks. These started popping up in the various cities over the weekend.

“We loved collaborating with individual artists that reflected their city while being inspired by ours,” Donna Karan said. “It’s like a worldwide street art fair — connecting the dots of art, style and community.”

Watch a Teaser of #DKNYArtworks here >>

The project was a direct result of the constant queries about the wall since it came down. “People are constantly asking us where it is, so we started the project asking ourselves, ‘How do we wake up the logo?’” asked Patti Cohen, DKI’s executive vice president, global marketing and communications.

Dorsinville added how the four letters as a window offered “an opportunity for us to rethink what we want to show today, something that could be relevant and a new interpretaion of the city as we know it.”

There were two artist selections for New York: twin brother artists How and Nosm created an installation of the four-large-letter billboards for Times Square at 48th Street and Seventh Avenue, while Amy Gartrell’s take on the DKNY logo will be on display on the Madison Avenue flagship, in Yankee Stadium, on digital screens at JFK Airport’s terminal one and covering the Hamptons Jitney in July.

London graffiti artist Roids created a 10-by-13-foot, three-dimensional logo installation that will move to different locations in the British capital replete with @DKNY Twitter teases about the top-secret locations, reminiscent of a treasure hunt. For Dubai and Kuwait City, Tehran-born artist Sasan Nasernia used Persian and Arabic calligraphy in abstract ways inside the letters. Other artists are Christophe Hamaide-Pierson for Paris, Maurizio Galimberti for Milan, Calvin Ho for Hong Kong, Nod Young for Shanghai, Junkhouse for Seoul and Yamaguchi Soichi for Tokyo.

“We were contemplating using our logo in various global cities, because we couldn’t find that New York entity that replaced the wall on Houston,” said Jacki Bouza, DKI’s senior vice president, global advertising and marketing. “The constant collaboration with different artists is so important to us as a brand.”

DKNY is selling limited-edition product tied to the artwork. For instance, Galimberti’s is placed on a tote bag and scarf, while Soichi’s is on such pieces as T-shirts, totes and flip flops.

The DKNYArtworks.com microsite features artist profiles, inspirations and behind-the-scenes videos of how each artist created his work, as well as an interview with Arnell on the history of the original wall, from concept to creation.

Viewers can photograph the artwork display and unlock a video of the artists specific to their city through the DKNYfx augmented-reality mobile app available at dkny.com/fx. As for social media, entries tagged #DKNYArtworks on Twitter, Instagram, Tumblr, Weibo and Vibe will run on the microsite’s social graph.

“Having chosen artists in those cities, we hope that the people who live there will appreciate the fact that we have collaborated with one of their own,” said Aliza Licht, DKNY’s senior vice president, global communications.

The company anticipates more than 150 million impressions from the media placement alone. Of the 10 artists, eight are donating their work to be auctioned off in collaboration with Free Arts NYC. The bidding process will start at paddle8.com and end with a live charity auction and party at Montauk Beach House on June 29.

Cara Delevingne will formally celebrate the project with a party in London on June 12 featuring performances by Rita Ora and Iggy Azalea. The event theme is the Nineties, which makes perfect sense. “That’s when the original wall went up,” Cohen noted.