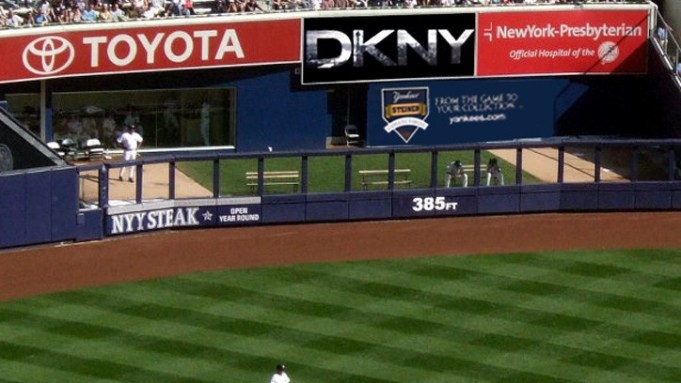 NEW YORK — DKNY is hoping to hit a home run with it newest endeavor.

The brand inked a long-term, multifaceted sponsorship deal with the New York Yankees, which will bring its city skyline logo to a billboard in Yankee Stadium, and feature various other programs highlighting the brand at the stadium.

“Donna Karan created DKNY to capture the spirit of New York and the people who live here, including the most successful baseball team in history: the Yankees,” Mark Weber, chairman and chief executive officer of Donna Karan International and ceo of LVMH Inc., said. “This unique sponsorship gives DKNY a direct way to reach the consumer and also provides enormous visibility among the loyal, passionate audience — the millions of fans who visit Yankee Stadium each year, and the many millions more who watch Yankees games on television.”

Linking up with professional sports teams seems to be more in fashion than ever for brands, particularly in men’s wear. In the past few months, several nonathletic apparel brands have struck deals with teams or individual players, from JA Apparel Corp. and its Joseph Abboud brand with the New York Giants, to Emporio Armani and Canali enlisting celebrity athletes for their advertising campaigns.

While DKNY, which is owned by LVMH Moët Hennessy Louis Vuitton, didn’t disclose the investment it made, or the length of the agreement with the Yankees, the company becomes the first fashion brand to secure a permanent presence in the stadium, with an outfield bullpen billboard of the logo, positioned prominently in right-centerfield. The brand will also be the title sponsor of the Dugout Lounge, which is located in the third baseline Champions Suite seating section. The lounge is open to ticket holders in sections 27 B, 28 and 29, and all Legends Suite ticket holders, and will feature food while on-site screens show the ongoing game in high-definition, with DKNY footage on rotation.

DKNY will reach a nationwide audience with this deal. There are 81 games a year in the stadium, with 55,000 people attending each game. Millions more watch on television and on live-stream footage. Sunday night’s Yankees-Red Sox telecast at Fenway Park in Boston, for instance, had an average of 1.09 million viewers on the YES Network, which simulcasts Yankees and New Jersey Nets games.

DKNY is expected to work with the baseball team to develop more partnership opportunities, which, according to the company, could range from special premiums for the DKNY Lounge to community-focused charitable programs and other activities to attract customers at different levels.

“For the first time, a sponsor in the fashion apparel category will have a significant permanent presence in Yankee Stadium,” added Lonn A. Trost, New York Yankees chief operating officer. “We believe that DKNY’s heritage in New York is a perfect fit for the New York Yankees.”

The public will see the billboard for the first time on April 13, at the Yankees’ first home game of the 2010 season. As for Karan herself, she won’t be missing out on the action. She is expected to attend the April 16 game, and make an appearance on the field during batting practice.