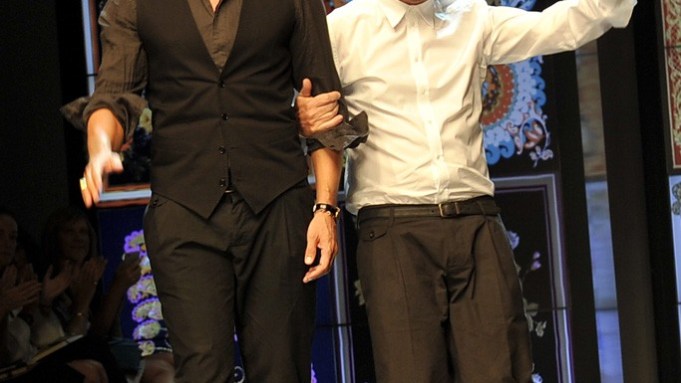 MILAN — Domenico Dolce and Stefano Gabbana might be folding the D&G line, but only to incorporate it into, strengthen and expand their signature line. And they have a number of projects to jump-start this strategy, including the launch of a fine jewelry line this weekend.

The pieces will reflect the designers’ imagery, with horn-shaped amulets or reproductions of the Virgin Mary. “They have an intimate feel, they almost look like you could have inherited them,” chimed in Dolce. The jewels will be available only at Dolce & Gabbana boutiques starting in November.

Gabbana said he and Dolce had been mulling the idea of focusing on the signature line for about two years and were feeling galvanized by the prospects of further growing it by “working on its DNA.” The designer explained that customers will still be able to see the D&G logo, but only because it’s an abbreviation of their surnames. “Without taking the style into consideration, ever since the early days, we were always looking at the Chanel Maison as an example, one with one single brand,” Dolce explained. “We think that in order to work well, to be in the market for a long time, and to leave something after us, there must be only one brand and not two,” said Gabbana.

Having one strong signature brand will allow the company to reach a wider customer base and offer a more extensive product range, they maintained.

Dolce rejected the idea that the two brands may have created some confusion, blurring the lines in consumers’ minds.

“There is an enormous market for the production of lower-priced fashion. Of course, we would never downscale, but we’ve had pieces over the past year and a half that retail at around 450 euros [$616] in our stores,” said Gabbana, implying that they will continue to provide customers with more affordable items within their signature line as well. “Our pre-collection is also very large,” he added.

The designers said the D&G licenses will be gradually phased out and that stores will be reassessed. Licenses include fragrances with Procter & Gamble Co.’s Global Prestige Products division, and eyewear with Luxottica.

“We started this job 26 years ago, we love it, and our choices are instinctual, they come from our heart. This is a huge change, and some people may think we are crazy, [but] it’s an exciting moment for us, and we will continue to work as before, only with a larger umbrella encompassing our designs,” said Gabbana.

“We are very happy, this is not a closure, it’s an opening of new opportunities for us, simply with one brand,” said Dolce. “We are independent, it’s our own company and we have nobody to report to. We may have made mistakes in the past, but we feel this is the way to go.”

The company revealed that it was folding the D&G line during the brand’s fashion show Thursday, thus sealing it as the last for the label. In a statement, the designers said the move would give “even more strength and energy to our collections.”

The news confirms a WWD report in March. As far back as then, it was understood the last D&G collection was going to be for spring 2012.

D&G has been a significant driver of the company’s growth, but the decision could expand the scope of the signature line.

“We are going through a very happy moment of our lives,” said the designers in the statement. “To us, it’s like going back to when we began our adventure: full of ideas. We have a lot of new projects to start in the same way as many years ago when D&G was born. This is our new reality, and we are extremely happy about it…”

The company had increasingly invested in D&G since it terminated its 12-year relationship with IT Holding’s Ittierre in 2005, taking operations in-house with the spring 2007 season. The firm built a $48 million D&G headquarters in Milan, a 54,000-square-foot structure for the brand’s showroom, commercial offices and press offices, with specifically designed Ron Arad furniture.

But perhaps the first signs of the new strategy came in spring 2010, when the company said it planned to concentrate its investments in Japan on its signature brand and end distribution of the D&G collections there, starting with the fall season.