The Odd Couple: Donatella Versace and J.W. Anderson for Versus

Working together against the grain, Versace and Anderson are so wrong, they’re right. 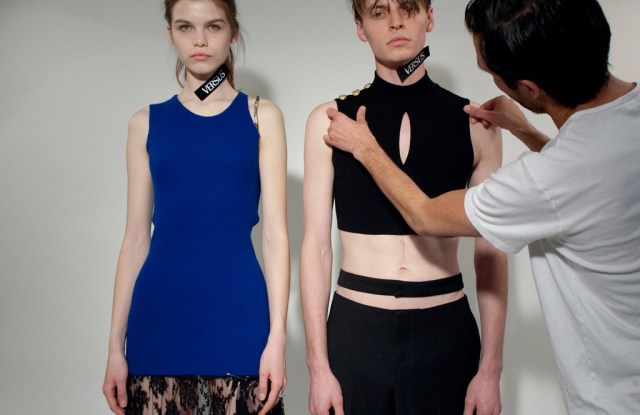 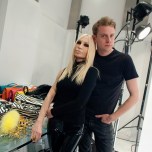 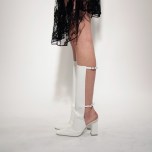 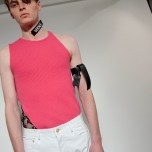 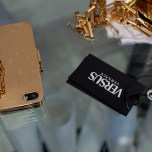 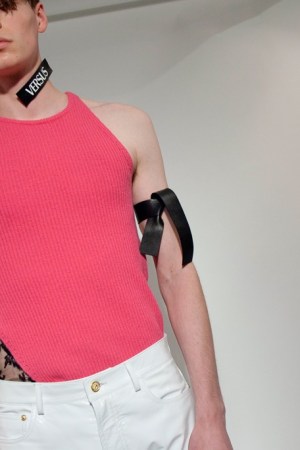 A men's look from Versus Versace. 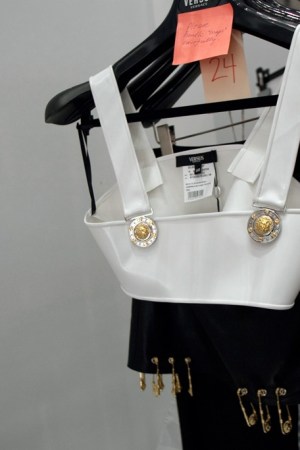 Details at the Versus Versace collection preview. 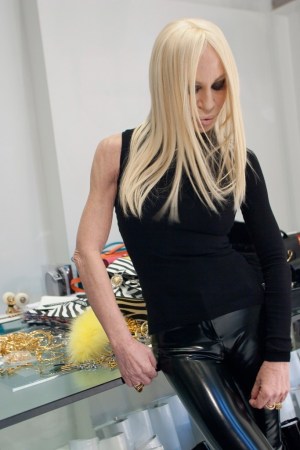 The scene Monday night on the fifth floor of Versace’s Fifth Avenue store was at once a page from the playbook of the surreal and business as usual.

The occasion was a preview of Donatella Versace’s latest iteration of Versus Versace, now positioned as a seasonless collection of house classics, and its new, one-season capsule line by J.W. Anderson. Both will make their public debut tonight to great fanfare, and not with a typical fashion show. To label it as such does not do justice to the “happening,” nay “event,” in the words of Versace’s p.r., which will take place from 9:30 p.m. to around midnight at the Lexington Avenue Armory, where performances by Dead Sara, Angel Haze and Grimes will split up the three tableaus of clothes, along with a soundtrack by Lady Gaga produced exclusively for the event. Good old-fashioned partying is encouraged in the interim.

But back to the temporary atelier on Monday. With the exception of Versace’s daughter Allegra Versace Beck, a mostly anonymous staff of stylists, assistants and store personnel paced in and out, corralling models and generally behaving in a manner that can be described as “on edge.” There were racks of clothes, colorful and muted; rows of slick, modish patent boots with cut-out backs, and model casting boards lining the walls. A table in the middle of the room was splayed with cigarettes — real and electronic — packs of gum, Polaroids and piles of pins and safety pins meant to be both functional and decorative. Versace sat back puffing on her electronic cigarette, awaiting a touch-up to her hair and makeup while her public relations team nervously engaged in some combination of guessing game and ESP, eagerly trying to make Versace’s wish their command. Did she want to do the portrait or the interview first? Would she and Anderson be interviewed together or separately? Most importantly, how was the lighting?

Whatever the unspoken reason for this tension, Versace herself seemed unaffected. She blithely posed for portraits — both solo and with Anderson — and her talking points were ready, neatly printed out on a single sheet of paper. In November, Versace disclosed that she and Christopher Kane, with whom she relaunched Versus for spring 2010, would part ways. Though Versace said she misses Kane “dearly,” she took his departure as an opportunity to rethink Versus. The collection has been her baby since her beloved elder brother Gianni bestowed her with its creative direction in 1990. Then and now, she wanted it to be young, provocative and hinged on the raw energy of music and rock and roll. “I [originally] showed in New York for this reason because this is a city where you can feel the energy, you can feel the dynamism, you can feel the creativity from everywhere, not only from fashion,” said Versace. “From music and movies, art, everything. [In the beginning] it was really revolutionary because I was the first Italian to show in New York, and then because I was with Bruce Weber. There was a special feeling. We were looking always for the new thing, the next model, a new emotion, an attitude that afterward became normal but at the time was not.”

Maintaining a sense of newness was and is essential to Versus, so Versace didn’t miss a beat replacing Kane with Anderson, whose perverse way with gender-bending, particularly in regard to men’s wear, has made him a star on the London circuit. But whereas Kane was hired to design Versus long term, Anderson and his successors are on a one-off basis. Versace also wanted to reposition the label for a broader fashion audience, namely the Internet community. “The Internet is the new house of fashion,” said Versace. The idea being that on the Internet, fans can find images of Versace new and old — they want the iconic pieces as well as the new stuff. Thus the introduction of Versus Versace, reconceptualized as the classic line plus the capsule collections. Versace can add and subtract as she pleases, but the “core” boils down to three motifs — black-and-white optical, safety pins and studs. “This is [the] core collection,” she said, tugging at the oversize gold safety pin at the neck of her slinky one-shouldered black top, a matte contrast to her flared vinyl pants, that looked as if someone picked her up and dipped her in a vat of oil. “I don’t mind to be chic.”

When it came to finding a new collaborator, Versace originally dismissed the idea of J.W. Anderson, whose conceptual style blurs gender lines with a blend of sporty and classic, which could not be more at odds with the Versace religion of slick and sexy. “I thought, ‘He’s not for me,’” said Versace. “Then I went back and said, ‘Wait a minute, this guy has something.’ He’s a great talent. Genius.” What she likes most about Anderson, 28, who launched his collection in 2008 and won the British Fashion Council’s Emerging Talent Award around the time Versace came calling, is that, “He is not afraid to dare, he is not afraid to provoke. He’s not afraid of a mistake,” said Versace. “It’s very like my brother — if you criticize less, you’re safe. I hate that word. I hate that way of thinking.”

With that, she turned the floor over to Anderson, whose unbridled enthusiasm and outgoing disposition came as a surprise from a designer whose collections are laced with subversion and seriousness.

As Anderson, who goes by his first name Jonathan, recalled, he was summoned to the penthouse of London’s Dorchester hotel in November, where Versace made her proposal. Within weeks, he was in Milan, immersing himself in the house archives, which must have been a surreal experience for a relatively unknown designer from Northern Ireland, right? “It’s very family-oriented if that makes sense?” said Anderson. “You feel like you’re being brought into a home. It doesn’t feel corporate and I love that, the kind of the mistake of things. Everything I thought in my preconceived was shattered each time.”

Anderson loves the unexpected. He is delighted when things are “wrong” from an aesthetic standpoint. To him, it’s a sign that he’s moving in the right direction. Take, for example, the colorful ribbed knits — dresses and tops in electric blue, pink, orange and yellow with black lace panels — that hung around the room and look to feature prominently in the men’s and women’s collections. Color was Versace’s idea since Anderson tends toward black and white, but he came around to it, not because the hues are fun and give the collection a youthful energy, but because “I love the wrongness of pink and orange and the cheapness of it,” said Anderson. “Something that feels a bit borderline is always the best because it’s wrong.”

Equally wrong is the twisted androgyny of the capsule collection. Body-con knits with shoulder cutouts and sheer lace backs that on the hanger looked to belong to the women’s collection were actually part of the men’s collection. That was made clear when a male model walked out in a tight black crop top with gold buttons at the shoulder and plain black trousers. Anderson did a similar look for women, emphasizing his fixation on unisex, a theme in his own collections. “Unisex is the most modern thing that a lot of people do not touch on,” said Anderson. “The whole collection has to feel jarred….I think there’s a sharpness of the bridging of the [male and female]. When something is ugly and wrong, I feel that it’s right. You’re not used to it.”

With the exception of the men’s midriff-baring shirts, the capsule is quite wearable. Anderson put a lot of focus on the nuance of necklines and sleeves that Gianni pioneered. For example, he shortened the lining of a sleeve on a tailored blazer to create a tucked look. Mixed in with the glamorous Italian edge of Versace is Anderson’s trademark banding and slashing motifs, which play out in accessories with geometric rings and leather bands that can be tied around the arm. There are also messenger bags in bright colors that match the knitwear and black-and-white patterns, all decorated with big safety pins. Add to that clinical white-and-black shopping bags, flat to the point of two-dimensional with pinked edges, and gold iPhone cases attached to chains and gold tiaras — for men, of course.

“What’s different about Jonathan is he thinks about the marketing, the buying,” said Versace. “He sees everything together — the provocative, the daring, but also how they’ll wear it.”

They’ve distilled all the ideas, archival and new, into 31 looks for the presentation tonight. “The message has to be short and precise, like Twitter,” said Versace. To her point of the Internet age, it’s immediacy and reach, 26 items from the Versus Versace collection will be available immediately on versace.com; prices range from $250 for a dress to $1,250 for a studded leather dress. The Versus Versace J.W. Anderson capsule pieces, which are priced between $485 for men’s wool pants and $645 for a knit and lace dress, will be available on June 15, online and at Net-a-porter, Opening Ceremony, Browns of London and Saks Fifth Avenue.

As for the union of Versace and Anderson, it’s a one-time-thing — “for now,” said Versace.