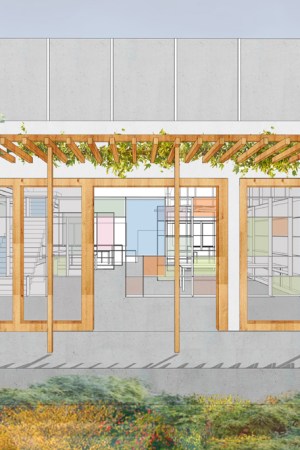 NEW YORK — In the soothing, calm of Urban Zen, Donna Karan was a whirlwind of energy, darting around the precisely appointed space with boundless enthusiasm as she pointed out the details and craftsmanship of the numerous Haitian-made designs.

The designer certainly has reason for such zealousness, having recently partnered with The New School’s Parsons School of Design to open DOT, the Design, Organization, Training Center for Haitian artists in Port-au-Prince. Whether showing off oversize leather necklaces, tobacco leaf vases, papier-mâchè handbags, a yoga mat bag made from recycled T-shirts or intricate iron-work designs, Karan had a one-size-fits-all description: “This is Haiti.”

She would know, having visited the country multiple times in the past five years to work with artisans such as Pascal Thearad, Cookie Villard, Shelley Fox and Jean-Paul Sylvaince. The unlikelihood of a hip West Village designer store championing the handiwork of one of the world’s poorest countries resonates with Karan, who said people often react to her Haitian-made designs with, “Really, Haiti?”

Five years after she first visited Port-au-Prince following the 7.0 earthquake that rocked Haiti and caused an estimated $8 billion in damage, Karan has increasingly upped her commitment personally and through her Urban Zen Foundation. Last month a foursome of Parsons faculty and students flew to the island to map out a game plan with Karan and local designer Paula Coles. They worked on renderings for DOT’s 5,000-square-foot space, including an outdoor garden with plants that can be used for natural dyes, a showroom and work stations with Urban Zen-provided tools. In June, three students and two faculty members will go to Haiti for the summer to create a logo for DOT and work with artisans.

“I always wanted to start with vocational education, because when you give someone a job, it’s like a fishing rod. It’s teaching them how to do it for themselves,” Karan said. “Everyone in Haiti has an artisan capability. That is their true nature.”

Along with the areas for education courses, meetings, yoga classes and communal dining, the DOT facility is meant to make it easy for people to learn about the products on display and provide a safe location for artisans to produce their work, improve their skills and build a community.

Neither Karan nor Parsons would pinpoint the financial commitment, insisting the union will be a long-term one, potentially emulating the 30-year track record that Parson has with a similar project in the Dominican Republic on the other half of Hispaniola. With construction underway at DOT, Parsons students will be working with 20 different artisans initially. The program’s crystallization was something Karan has strived for since 2010.

Another element of the collaboration is Parsons’ partnership with the art school ENARTS, (École Nationale des Arts) in Port-au-Prince to expand opportunities for aspiring Haitian student designers. ENARTS’ dean Philippe Dodard, Haiti’s most renowned artist, took that academic role after Karan urged him to do so. He was recently instrumental in having a paved road and a pedestrian walkway installed to replace the dirt road in the area where many iron workers are based. In a strange twist of fate, while admiring an iron gate in Haiti in 2011, Karan wondered aloud who made it. It was by Dodard, who happened to be standing nearby and introduced himself. The dot-connecting became even more aligned after she saw that his paintings, iron sculptures, jewelry and photography were reminiscent of her late husband Stephan Weiss’ work. Karan has since used his designs for her Urban Zen-made goods, including a T-shirt design that Olivier Martelly, the president of Haiti’s son, wore in an Urban Zen ad campaign with Adriana Lima in 2012. Russell James, founder of Nomad Two Worlds, is another collaborator.

While Haiti’s unemployment rate has fallen to 7 percent from the post-earthquake rate of 40 percent, according to the World Bank, many still associate the country with the mass destruction caused by the tragedy. Two years ago Karan persuaded Parsons School of Design’s executive dean Joel Towers and one of the school’s board members, Sheila Johnson, to tour the country of 10.3 million, where the average life expectancy is 63 years old. “We had been having meetings over the years but you don’t really understand it until you go there,” Towers said.

Despite his familiarity with Haitian artisans’ talents, even Towers looked impressed at Urban Zen on Tuesday as he admired ceramic vases that he had not seen before.

Far from a vanity project, Karan said the impetus for the Port-au-Prince vocational training center (and its name) stems from Weiss’ fondness for connecting the dots in his art, life and business. To further that point, she leafed through her book “Stephan Weiss: Connecting the Dots” to show the artist’s vast body of dot-connecting artwork. “I am here to preserve his legacy, not only for his artwork but also his passion for teaching,” Karan said.

“The first day we landed in Haiti when Donna was meeting the artisans, she turned to me and said, ‘My dream, my dream seriously, is to have Parsons students in Haiti,’” said Urban Zen Foundation’s director of partnerships Marni Lewis. “I was like, ‘Yeah, that’s going to happen, right?’” [referring to her then-sarcastic reaction.] I said, ‘Donna, that is a very lofty dream.’ And here we are with Parsons in Haiti.”

Despite a driver’s insistence that he could not leave her without any security in the gang-riddled Bel Air neighborhood where many artisans live, Karan said she told him, “‘You don’t understand. Artisans talk to other artisans differently.’” (Apparently, they protect each other, too, considering that after working with Karan on the dirt floor of their shops, they surrounded her as she walked back to her car.)

Noting today’s shared economy and her commitment to 7th on Sixth sales years ago, Karan said she aims to bring other designers to Haiti. “It’s not a ‘me’ project,” she said, adding that her friend Pauline Brown, a Parsons board member, took her family there in December. While not in Haiti in relation to her role as chairman of LVMH North America, Brown said Wednesday she will continue to buy Haitian art for herself and to further her connections with artists through Parsons. “There is absolutely a thirst for such beauty in Haiti,” she said. “I am very proud to have made that journey and I hope that others from the industry will think to do the same.”

Diesel Canada’s president and chief executive officer Joey Adler also has worked in Haiti for years and inspired Karan. Adler launched Industrial Revolution II and opened a state-of-the-art garment factory with support from Karan and such social activists in 2013.

“You can’t do the whole thing. But each of us do a piece of it and all of the pieces make a whole,” Karan said.

Noting that Parsons is the most internationally diverse university with 119 countries represented, Towers said students will bring a certain level of respect, “It’s not just going someplace and taking from. It’s the opposite — it’s going and working with,” he said.

Giving up the New York speed for life is also essential. “With Haiti, you have to flow with it,” Karan said.

Well aware of the success of designer John Hardy’s Green School in Bali and its bamboo village, Karan aims to do something similar in Haiti. “In developing countries, the biggest question is, ‘How do you support who they are?’” she said. “When I was first starting out the differences between New York, Paris, Milan and London were vast. Now it’s the same stores, same kind of restaurants, same everything. Where’s the speciality? That comes from artists and designers.”