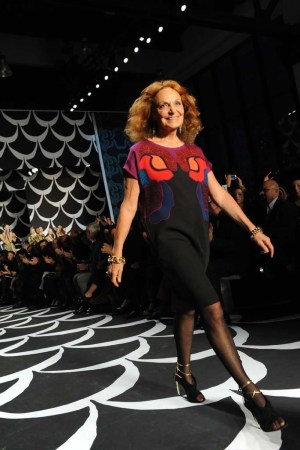 During New York Fashion Week, Donna Karan and Diane von Furstenberg each had loads of reasons to celebrate—30 and 40, to be precise.

Karan marked her 30th year in business and von Furstenberg rang in the 40th anniversary of her namesake wrap dress with not-easily-forgotten runway extravaganzas. Their celebrity friends turned out in force to see every last look and to raise a glass afterward.

Visibly emotional as she took her runway bow, Karan was no doubt reflecting about the 30 years that had swept by—the ups and downs of business, and the lasting influence of her late husband, Stephan Weiss. And Donna being Donna, there was the added stress of the preshow rush, which included a few mishaps, including a horrible lighting test that left her “freaking out.” Rita Ora, Hugh Jackman, Katie Holmes and Trudie Styler were among the VIPs who caught the show, held in a construction site in the heart of Wall Street—really, the former home of J.P. Morgan and once a stand-in for the New York Stock Exchange in a Batman movie—that was so bone-chillingly cold everyone stayed bundled up.

Von Furstenberg meanwhile began the year with the opening of the “Journey of a Dress” exhibition in Los Angeles that included vintage and contemporary wrap-dress designs and portraits of the designer by Andy Warhol, Chuck Close, Francesco Clemente, Helmut Newton and Annie Leibovitz, among others.

At DVF’s after party, Zoë Kravitz did the honors in the DJ booth while revelers snatched flutes of bubbly and took to the leopard-printed dance floor. In a quieter corner of the room, Sabine Heller powwowed with Valerie Boster and Zani Gugelmann. Kelly Rutherford, arm slung around bestie Jennifer Creel, posed for photos.

Amidst the merriment, von Furstenberg reflected, “The thing about the wrap dress is—even though it’s paid all my bills; it’s made me famous; it put me on the cover of Newsweek; it made me have an American dream—I always took it for granted. Sometimes I even resented it—even the second time around when I started again—because people said, ‘Diane von Furstenberg, oh right, the wrap dress.’ But since I decided to do the exhibition in L.A., I’ve realized that the one thing I’m most proud of, besides my children, is the wrap dress. Once I decided to do the exhibition and honor it, I started paying attention to it, and now I look at it completely differently.”

In late March, von Furstenberg kept the celebration going by staging a recap of her fall runway show during Tokyo Fashion Week. By then, she was getting ready for the next chapter. “I have done nothing but talk about myself the entire time,” she said, “so it’s not been very inspiring.”