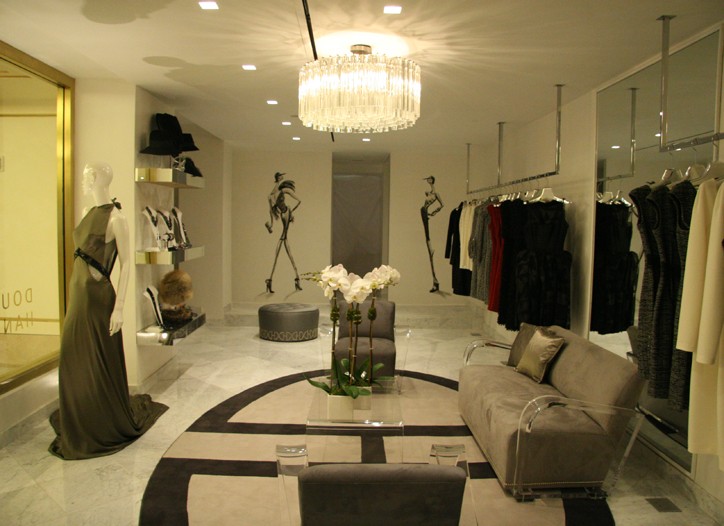 NEW YORK — Douglas Hannant is aligning himself with the Plaza.

Hannant today will open an 850-square-foot store at the Plaza Retail Collection, a 160,000-square-foot, multilevel space that’s been challenged to establish itself as a luxury shopping destination at a time when the ranks of luxury shoppers are thinning.

The designer, who showed his fall collection in the Edwardian Room, has an agreement to hold subsequent runway shows at the Plaza, including his spring presentation on Sept. 14 at the Terrace Ballroom.

The Plaza Retail Collection’s understated signage suits Hannant just fine because his customer values exclusivity above all else. “The kiss of death for her is seeing 12 people wearing the same dress,” he said. To guard against that, he only displays several pieces of each style. Hannant’s average price point was over $2,000; however, in a concession to the economy, he’s introduced some day dresses for $1,700. Frederick Anderson, Hannant’s partner, expects the store to do $2.5 million in its first year. Two years from now, sales are expected to be between $4 million and $5 million.

Hannant and Anderson have done their due diligence on the location. Just beyond the atrium and visible from the retail collection’s dedicated entrance on East 58th Street, Hannant has preferred space on the ground floor of the retail collection. Anderson said he would not sign a lease until he received assurances from the Plaza’s owner, Elad, that an awning with Plaza Retail Collection signage would be erected above the entrance. “Part of our negotiations was for a white-gloved doorman outside,” he said, adding he also requested topiaries in planters and the street outside the entrance be declared a no parking zone.

So far, the awning is in place — no small feat due to the Plaza’s landmark designation. “Yes, they have a lot of kinks,” Anderson said. “They opened during the biggest downturn in recent history.”

“It makes sense for me to be at the Plaza,” Hannant said. “It’s such a New York icon. I made a decision to identify myself with the Plaza. The plan is to open stores in Palm Beach and Beverly Hills. We’re going to roll this out.”

Geoffrey Bradfield, an interior decorator and friend of Hannant’s, designed the store as a cross between the bedroom of a beautiful icy Forties screen siren and the contemporary residence of a well-to-do Manhattan denizen. Marble floors and silver fixtures create sleek lines. Bradfield created furniture for the store — gray suede chairs and a couch with wide Lucite arms, a Lucite coffee table and a gray rug with Hannant’s logo initials. On two back walls are Hannant sketches of looks from the collection.

Hannant is not selling his collection anywhere else in New York. The designer has sold to Bergdorf Goodman and Saks Fifth Avenue in the past, but said, “With the big stores being trapped in this markdown madness, I made the decision that nothing will go on sale. The department stores devalue fashion. I won’t ship goods until need. Resort will be shipped to my store in November. I can control what I sell. If something is selling well, I can ship more. New merchandise will arrive every two weeks.”

The store has enabled Hannant to launch new product categories such as hats by Eric Javits for Douglas Hannant, a shoe collection and a semiprecious jewelry line. He also plans to introduce a line of evening bags.

The Plaza’s retail strategy has developed into a quirky group of retailers, including Seize Sur Vingt, Domenico Vacca, Kenneth Jay Lane, Arthur, Assouline, Demel Bakery, Warren Tricomi, Vertu and Qiviuk. At the Plaza, a restaurant has finally been signed for the Palm Court and a club operator chosen to run the Terrace Room. “Also, a high-end food court just signed a contract downstairs,” Anderson said. “We now have a retail expert and a marketing team. It’s making a big difference.”